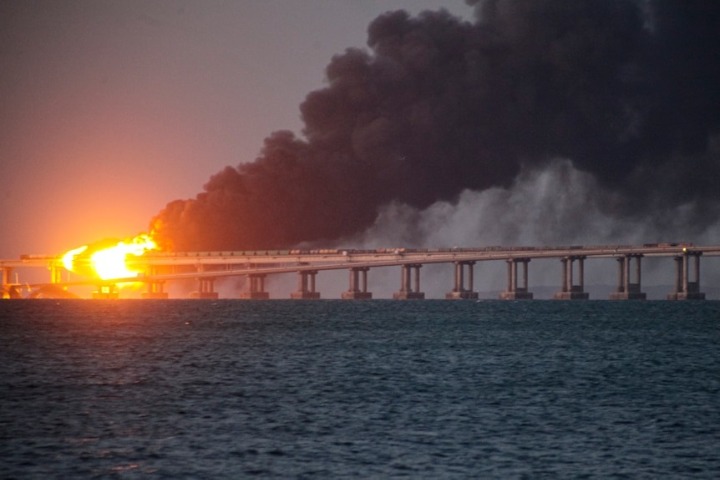 Russia's Kerch Bridge crumbles, what does it mean for them?

Russia’s Kerch Bridge crumbles, what does it mean for them?

On Sunday, October 9, Russian divers will investigate the damage caused by a huge explosion on Russia’s road-and-rail bridge to Crimea, which hit a prominent symbol of Moscow’s annexation of the peninsula and a crucial supply line to forces fighting in southern Ukraine.

Saturday’s explosion on the bridge over the Kerch Strait, for which Russia did not immediately assign blame, provoked words of joy from Ukrainian officials, but no claims of guilt.

Deputy Prime Minister Marat Khusnullin was quoted by Russian news media as saying that divers will begin work at 6:00 a.m. (0300 GMT), with a more extensive survey above the waterline likely to be completed by the end of the day.

Sergei Aksyonov, the Russian governor of Crimea, told reporters, “The situation is controllable; it’s uncomfortable but not fatal.” Clearly, emotions have been aroused, and there is a legitimate desire for retribution.

He stated that the peninsula has a month’s supply of fuel and over two months’ worth of food. The Russian Ministry of Defense stated that its forces in southern Ukraine could be “fully supplied” via current land and sea channels.

Kiev asks that Russian military withdraw from the Black Sea peninsula and all Ukrainian land they took during Putin’s February incursion.

The bridge is a vital artery for the Russian military that control the majority of southern Ukraine’s Kherson area and for the Russian naval port of Sevastopol, whose governor urged inhabitants to “be calm, don’t panic!”

It was not yet known if the explosion was a purposeful attack, but the destruction to such a prominent structure occurred in the wake of many military defeats for Russia, and could cast doubt on Kremlin assertions that the conflict is proceeding as planned.

Putin issued a directive Saturday mandating increased protection for the bridge and the infrastructure bringing electricity and natural gas to Crimea, and he also ordered a probe.

“It is conceivable that the Russians could reconstruct it, but they cannot defend it while losing a war,” said James Nixey, a political expert at Britain’s Chatham House.

According to Russian officials, three individuals were killed, most likely the passengers of a car traveling near a truck that exploded. Seven fuel tanker wagons of a 59-wagon train headed for the peninsula caught fire on the upper level of the bridge.

Why is the Kerch Bridge so important?

Moscow constructed the Kerch Bridge to connect the recently seized Crimean Peninsula to the northern Caucasus province of Krasnodar Krai.

At the time, the bridge cost $3.6 billion (3.25 billion euros). The enormous project to improve Crimea’s infrastructure and enhance its relationship to Russia is the longest bridge in Europe, measuring 19 kilometers (12 miles) in length.

In constructing the bridge that spans the Kerch Strait, which connects the Sea of Azov to the Black Sea, Ukraine accused Russia of causing environmental damage and impeding the passage of larger ships.

The bridge is a vital supply route for Russian forces in the captured territory of Kherson, Ukraine. Moscow illegally invaded the southern Ukrainian districts of Kherson and Zaporizhzhia at the end of September in an effort to connect Crimea to the pro-Russian separatist-controlled Donetsk and Luhansk regions, which have been at war with Kiev since 2014.

The destruction of the Kerch Bridge has huge symbolic significance for Kiev, which has sworn to reclaim the Crimean Peninsula and all other Ukrainian territory now controlled by Russian soldiers.

The Ukrainian postal service announced it will create a commemorative stamp to mark the event.

Following the explosion, Mykhailo Podolyak, a presidential advisor in Ukraine, tweeted that this was “only the beginning.”

Podolyak stated, “Everything unlawful must be destroyed, everything stolen must be restored to Ukraine, and everything occupied by Russia must be ejected.”

Later on Saturday, Podolyak tweeted that the bridge’s damage was likely the result of sabotage from within Russia. “Is it not evident who caused an explosion? Arrival of a truck from [the Russian Federation],” he stated.

Maria Zakharova, a spokesperson for the Russian Foreign Ministry, stated that the reaction of Ukrainian officials to the bridge destruction “demonstrates [Kyiv’s] terrorist mentality.”