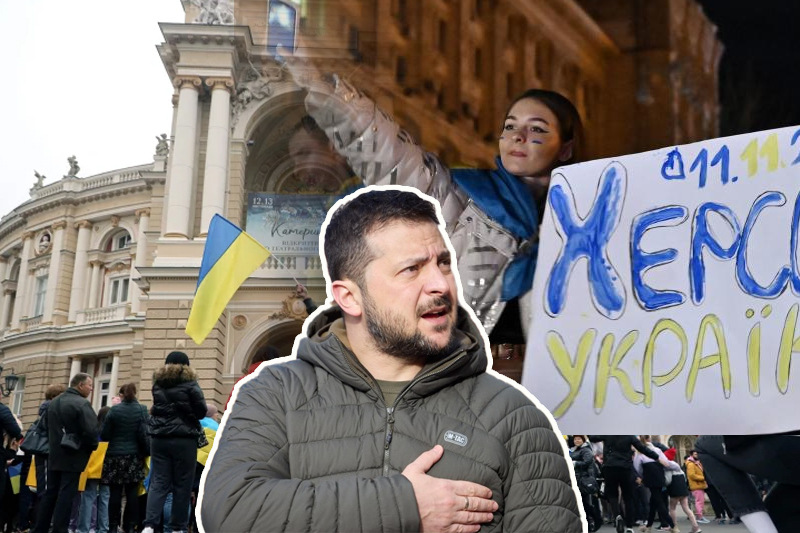 kherson liberation is the beginning of the end zelensky

Kherson liberation is the “beginning of the end”: Zelensky

President of Ukraine, Volodymyr Zelenskyy, on Monday triumphantly walked through the streets of the liberated city of Kherson, as he hailed the Russia’s withdrawal and victory of Ukrainian troops as the “beginning of the end of the war”. But he also acknowledged the heavy price that the Ukrainian troops are paying as they continue their grinding effort to push back the Russian troops.

“This is the beginning of the end of the war,” President Zelensky said as he awarded medals to soldiers in Kherson and posed with them for selfies. “We are step by step coming to all the temporarily occupied territories.”

Retaking and liberation of Kherson has definitely been the biggest success of Ukraine in almost 9 month long war with Russia. US President Joe Biden has also called it a significant victory for Ukraine. “I can do nothing but applaud the courage, determination and capacity of the Ukrainian people, the Ukrainian military,” he said on the sidelines of a Group of 20 summit in Indonesia. “They’ve really been amazing. … we’re going to continue to provide the capability for the Ukrainian people to defend themselves.”

In his nightly address on Sunday, Zelenskyy has accused Russian soldiers of “committing war crimes and atrocities” during their almost nine months long occupation. “Investigators have already documented more than 400 Russian war crimes, and the bodies of both civilians and military personnel have been found,” Zelenskyy said.

In a video address to the G20 leaders in the ongoing summit in Bali, Indonesia, Zelensky said, “I am convinced now is the time when the Russian destructive war must and can be ended. It will save thousands of lives.” Speaking to China’s Xi Jinping and US president Joe Biden, he said, “There are and cannot be any excuses for nuclear blackmail”, pointedly thanking the “G19”, excluding Russia.

“If Russia is trying to deprive Ukraine, Europe and all energy consumers in the world of predictability and price stability, the answer to this should be a forced limitation of export prices for Russia,” Zelensky said accusing Russia of using the cold weather as a weapon against people and countries.