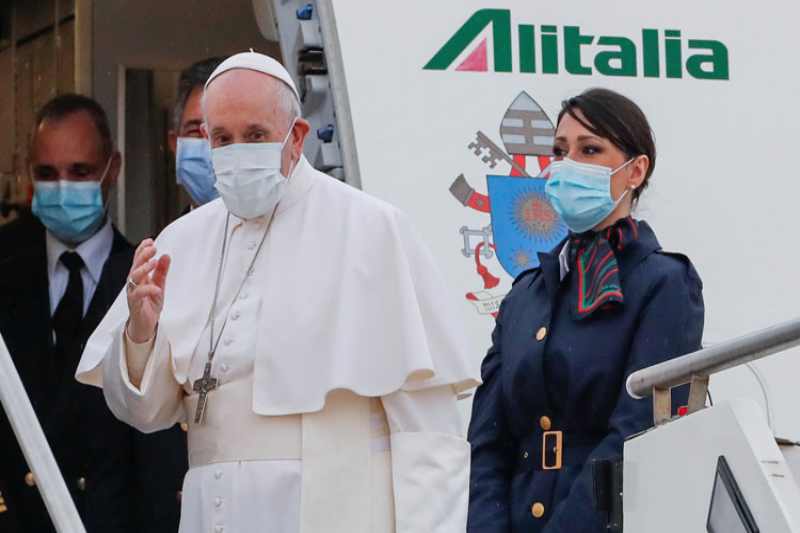 Pope Francis has arrived in Iraq marking historic first ever papal visit but the risk and security concerns hover the significant meet as Covid-19 numbers stay on surge path.

The three day visit to Iraq is Pope’s first international trip in almost 15 months amid coronavirus pandemic. The highlights of the visit include highly symbolic meeting with Grand Ayatollah Ali al-Sistani, spiritual leader of tens and millions of Shia Muslims, and worshipping with excruciatingly diminished Christian population that have suffered under the Islamic State rule.

Before his landing in Baghdad, Pope said that his presence was “a duty towards a land that has been martyred for so many years.” Vatican spokesperson said the Iraq trip was “an act of love to a country that has suffered terribly over recent decades”.

Today, the second day of Pope’s visit marks meeting between him and Grand Ayatollah and is currently taking place in the holy city of Najaf. The talks between Pope Francis and 90 year old Shia cleric are likely to focus on inter-faith topics including Iraq’s worrying diminished Christian minority that has been at the receiving end of brutal violence since US led Iraq invasion in 2003.

The trip by an 84-year-old Catholic Church leader at the time of the pandemic made the trip riskiest ever. As Pope Francis was received by Iraqi prime minister Mustafa al-Kadhimi at the airport, a group of the unmasked choir sang while both the leaders also removed their face masks, shook hands, and talked while sitting closer than 2 meters. After the meet and greet with Prime Minister, Pope Francis said in a speech, “Iraq has suffered the disastrous effects of wars, the scourge of terrorism and sectarian conflicts.”

He added, “The age-old presence of Christians in this land, and their contributions to the life of the nation, constitute a rich heritage that they wish to continue to place at the service of all.” Pope noted that Iraq’s Christian community must be given a more prominent role in society as citizens with complete freedom, rights, and responsibilities.