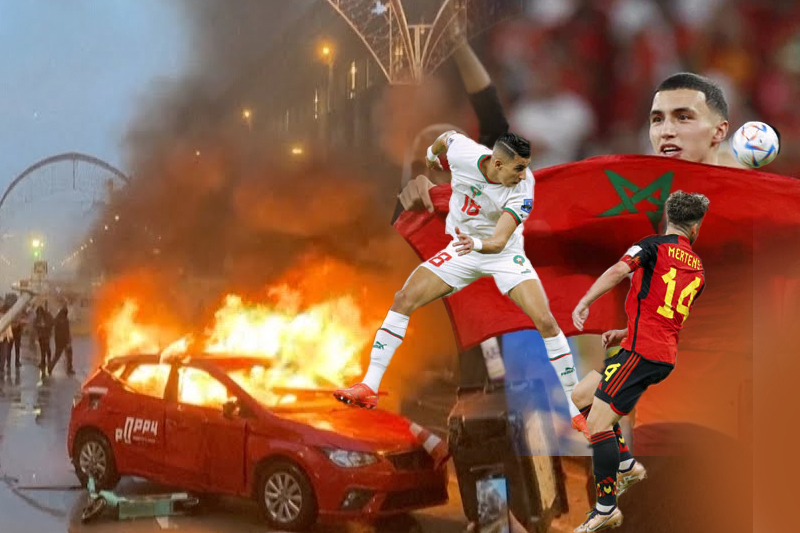 Following a shocking victory of Morocco by 2-0 in Sunday’s match against Belgium in FIFA World Cup in Qatar, dozens of upset soccer fans have opened riots across Brussels smashing shops and torching vehicles. Even before the end of the match, “dozens of people, including some wearing hoodies, sought confrontation with the police, which compromised public safety,” Brussels police said in a statement which has arrested 11 people for creating ruckus.

Around a hundred police officers in Brussels were mobilised with residents being warned to avoid areas of the city centre. Metro stations had been closed and streets were sealed off to limit the spread of the violence. Police detained about a dozen of people engaging in riots after they deployed water cannons and fire tear gas on the crowds to disperse them in Brussels and eight more in the Northern city of Antwerp. Two police officials had been injured in the Dutch port city of Rotterdam in clashes with the rioters.

“I condemn in the strongest terms the incidents of this afternoon. The police have already firmly intervened. I therefore advise against fans coming to the city centre. The police are doing all they can to maintain public order,” tweeted the mayor of Brussels, Philippe Close. “I have ordered the police to carry out arrests of the troublemakers.”

Police in the neighboring Netherlands said “violence erupted in the port city of Rotterdam, with riot officers attempting to break up a group of 500 soccer supporters who pelted police with fireworks and glass”. Media has reported unrest in Amsterdam and The Hague. Morocco’s victory was a major upset at the FIFA World Cup in Qatar and was celebrated by fans with Moroccan immigrant roots across many Belgian and Dutch cities.