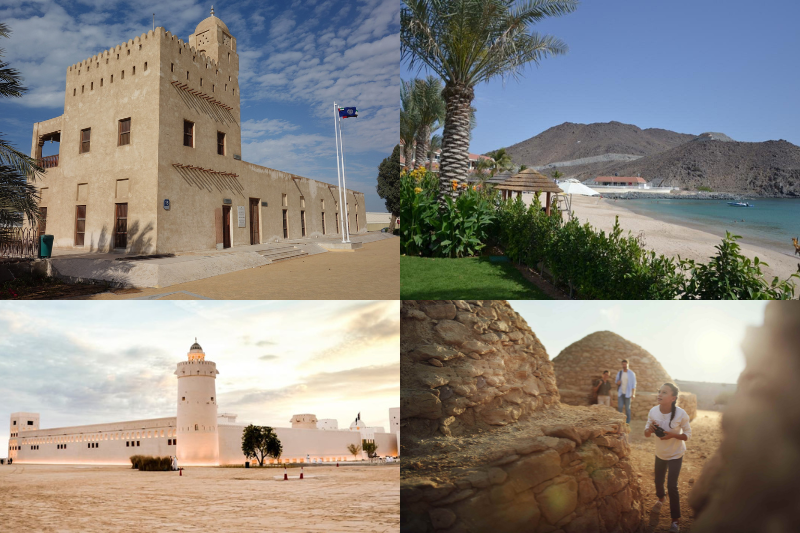 The United Arab Emirates may have only recently celebrated their 50th anniversary of independence, but Abu Dhabi has a long history. The largest of the emirates is home to a number of UNESCO World Heritage sites as well as some of the country’s best-preserved forts, which depict the tale of the Emirati people’s relationship with both land and sea through the centuries.

A short trip to the oasis town of Al Ain brings to life some of the country’s most magnificent gems, a living museum paying respect to the country’s Bedouin roots. Al Ain, the birthplace of the late Sheikh Zayed bin Sultan al-Nahyan, the country’s founder and first president, is a must-see for visitors to the UAE who want to get a true sense of the country’s history and tradition.

Often known as the Garden City, it was once a vital green oasis on the caravan route from the UAE to Oman and now houses multiple UNESCO World Heritage Sites.

Some of Abu Dhabi’s most important archaeological and historical sites are listed below.

The 18th-century Hosn Palace, or Qasr al Hosn, began as a single watchtower in the 18th century and grew into the seat of power until the late 1960s as the complex expanded.

“People who used to live around here used to tell amazing legends about the castle,” says Nataly Leslie, a tour guide in the emirate. “People could talk to the sheiks and express their worries through the palace door,” she added.

The palace is still a popular destination for visitors and Emiratis alike, who come to sit in the palace coffee shop and relish the spot their forefathers spoke so fondly of. With regular exhibitions and events, the palace also promotes local culture.

The spectacular Al Ain Oasis was the first of the UAE’s UNESCO sites. The site, which dates back over 4,000 years and is evidence of one of the first irrigation systems of modern times, is located in the heart of The Garden City.

Also Read: Stonehenge could be stripped off as world heritage site, confirms UNESCO; But Why?

The “falaj” system drew water from the adjacent Hajar Mountains through a network of tiny streams that can still be seen today. Visitors can wander through the complex, which spans over 1,200 hectares and has over 147,000 date palm trees and 100 different species of dates, on designed walking pathways.

The falaj system, which dates back centuries, was only upgraded in the twentieth century with the introduction of pumps. There is also an eco-center where visitors can learn more about the old Bedouin irrigation systems.

Khor Fakkan, a Sharjah seaside village with a gorgeous landscape, is located on the east coast of the UAE. This region is worth seeing and is regarded a fantastic vacation from Dubai because of the harsh mountainscape with curled beaches and little rocky islands.

Many people from nearby Emirates travel to Khor Fakkan to escape the city’s hustle and bustle and enjoy the serenity of nature. Not only does this place have a lot of natural beauty, but it also has a lot of architectural and historical significance.

You may see the key attractions of Al Aqah, Dibba, and Fujairah while staying between Dibba and Fujairah. A trip to Khor Fakkan from Dubai can be done as a day trip or as a weekend satiation.

Hatta, Dubai’s mountainous little sister, is an emirate exclave on the border with Oman that benefits from some spectacular natural beauty and a slower pace of life than the UAE’s major cities.

It’s a good weekend getaway and close enough for a mini-daycation because it’s only a two-hour journey from Dubai. Hatta is a great place to go hiking, bicycling, kayaking, and adventuring in the winter, and it’s also worth a visit in the summer for its milder temperatures.

Traveling to Hatta from Dubai takes about 90 minutes by automobile, with the Sharjah-Kalba road being the quickest. A two-and-a-half-hour drive from Abu Dhabi is in the cards. If you’re taking public transportation, you’ll need to get to Dubai’s Al Sabkha Bus Station and board the E16 bus. Hatta is a bit more than two hours away by bus.

The intriguing area has a rare Iron Age building and 5,000-year-old Bronze Age graves, as well as the towering Gharn Bint Saud, which once housed a big population of farmers spanning all the way to the northern emirates, all utilizing the area’s network of falaj irrigation systems.

This 40-meter-tall boulder rises above the countryside and is home to several old stone graves. Pottery, dagger blades, jewelry, and bronze arrowheads were among the discoveries made in the area, and are now on display at the Al Ain National Museum.

Villages, burial grounds, and agricultural infrastructure have been uncovered from the Umm an-Nar period, which is named for the island off the coast of Abu Dhabi where the culture’s remnants were initially discovered. It also houses the biggest collection of tombs and buildings from this time period in the UAE.

Also Read: Why World Cup fans are preferring UAE as base?

Jebel Hafit (Hafit mountain) is not only Abu Dhabi’s highest point, but it is also home to over 500 5,000-year-old tombs that date back to the UAE’s Bronze Age.

Archaeologists unearthed pottery vessels and copper objects in the igloo-like tombs first discovered through excavations in 1959, demonstrating the importance of marine trade throughout the Arabian Gulf. The single chamber tombs are a stunning sight that provides a glimpse into a bygone era.

This is one of Abu Dhabi’s “secret beauties,” according to tour guide Leslie. “Most people aren’t aware of all of these recent breakthroughs in this field,” she explains.

“Even though the UAE is a young country, archaeological finds show that this location was previously a bustling hub of activity where history was produced,” she added.

This small but important fort near the entrance to Abu Dhabi’s main island was built in the late 18th century out of simple materials like coral stones, beach rock, and sand, and its tower would watch and safeguard Abu Dhabi for many years.

Al Ain Palace, the former house of the late Sheikh Zayed, the UAE’s first president, was resided in by the ruling family until the 1960s, when they moved to the emirate’s metropolis as Abu Dhabi’s main island turned into a political and commercial center.

Visitors can see inside the house, which serves as a reminder of life before oil was discovered in the mid-twentieth century. Though not “ancient” in comparison to other sites in the emirate (the complex’s oldest building dates from 1937), it is constructed of conventional materials of the era and features the customary courtyards that typified such properties in the region at the time.

Visitors can now grasp Abu Dhabi’s quick shift from Bedouin existence to modern prosperity by visiting the museum, which now serves as a link between the past and the present.

“This is the best site to go if you are a history buff who wants to learn about the royal family and traditional architecture of the time,” says Shamsa Al Naqbi, an Emirati tour guide.

“It gives you an insight into the royal family’s life, their apartments, the style of construction, and the stuff they would use, so it’s a really beautiful site to come to learn about the UAE’s genuine past. It also demonstrates how our forefathers transitioned to the modern UAE we have today,” she explains.

Sir Baniyas Island, in the Western Region, is a little off the beaten path and can be reached by boat or plane from Abu Dhabi through the Anantara resort, which oversees the distant island’s tourism.

The church and monastery, which was discovered in the early 1990s, is the sole pre-Islamic Christian site in the UAE, according to Leslie. Hundreds of artifacts have been discovered there, providing a fascinating glimpse into life during this time period.

“Like life in the UAE before oil was discovered, the residents of this village relied on the sea for sustenance,” she explained. “They also kept livestock such as sheep and cattle, which they exported across the Arabian Gulf and into the Indian Ocean,” she adds.

Sir Baniyas Island is currently a wildlife reserve, home to a variety of endangered animals ranging from Arabian oryx to gazelle, which visitors may see up close on safaris.

As a tourist, these are some of the most beautiful historical places one should visit while travelling to the UAE.