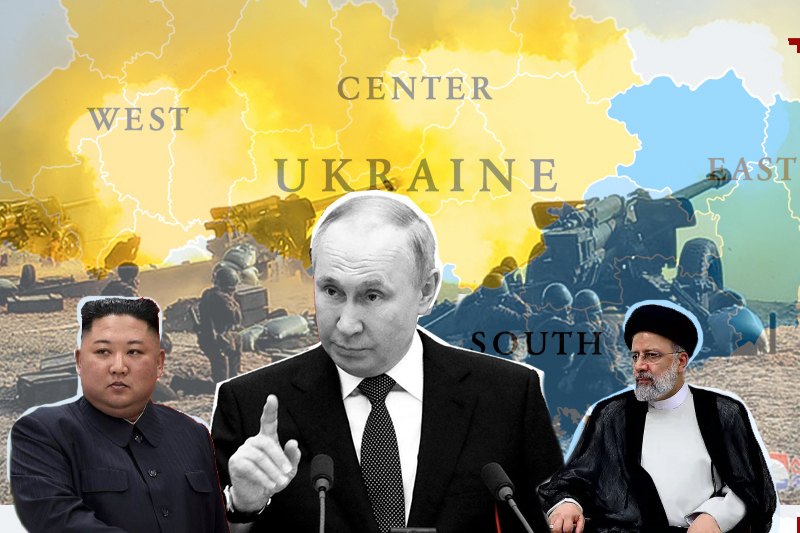 Procurement of weapons by Russia from North Korea and Iran has heralded a new rapidly converging alliance between the three nations through military and diplomatic needs and interests. The United States has renewed its accusations against Russia that it is attempting to procure more artillery ammunition from Pyongyang. This is along with missiles, kamikaze and other drones that have already been bought from Iran. This has also raised a red flag over mounting problems being faced by Moscow regarding the logistics of its weaponry in the war against Ukraine waged by Russian president Vladimir Putin.

“Russia may be seeking to stabilise its production and supply of key artillery shells during the coming winter by seeking ammunition from North Korea and elsewhere, to allow its factories to catch up with production”, according to an expert who was interviews by The Guardian.

Moscow is continuing its seemingly urgent efforts to procure more and more weapons from Iran and North Korea, the two nations considered as global pariahs. This also suggests the resolve by Kremlin to stretch the war in Ukraine well into the next year, despite the fact that it has faced some significant loss of control in some key territories as Ukraine has gained momentum in its offensive.

“Our information indicates that the DPRK is covertly supplying Russia’s war in Ukraine with a significant number of artillery shells, while obfuscating the real destination of the arms shipments by trying to make it appear as though they’re being sent to countries in the Middle East or north Africa,” John Kirby, spokesperson for the national security council, told reporters. North Korea “may represent the single biggest source of compatible legacy artillery ammunition outside of Russia, including domestic production facilities to further supplies”, Joseph Dempsey, a research associate at the International Institute for Strategic Studies, explained earlier this year. Coziness with Moscow is also being well enjoyed by Pyongyang, that continues to get alienated from rest of the world, especially after latest surge in its series of missile launches near neighbouring Japan and South Korea.