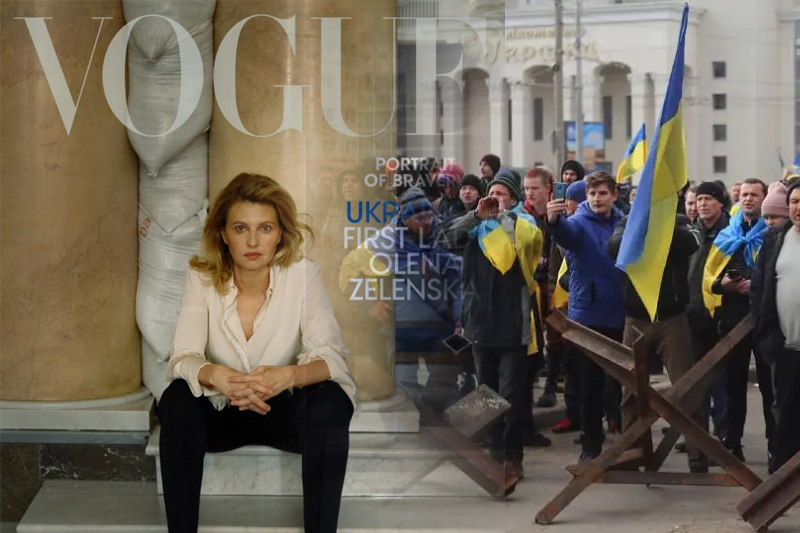 Ukraine has turned advertising into a weapon of war with its new brand, ‘bravery’

About July 26, a sneak peek of the cover article that will appear in the October 2022 issue of Vogue on Ukrainian first lady Olena Zelenska was posted on Twitter. The comments on social media were immediate and divided. The well-known photographer Annie Leibovitz recently participated in a picture shoot for a fashion magazine, and some people felt that it was a “poor idea” and that it made war look glamorous.

Others have praised both the magazine and the first lady of Ukraine for bringing attention to the plight of the Ukrainian people five months after Russia invaded the neighboring country for the first time.

Zelenska, who is 44 years old, appears in the cover photograph dressed in a cream-colored shirt with rolled-up sleeves, black slacks, and flat shoes. She is positioned so that she is leaning forward on the stairs leading up to the Ukrainian Parliament, and her hands are interlaced between her knees. She wears very little makeup, and her hair is tossed in a carefree manner as she gazes intently into the camera.

Within a matter of hours, Ukrainian women began sharing images of themselves sitting in the same position with the hashtag “#sitlikeagirl.” This was done as a demonstration of solidarity.

The article about Zelenska that was published in Vogue with the headline “A Portrait of Bravery” and was written by journalist Rachel Donadio is part of a larger communication strategy that was mounted by the government of Ukraine. This strategy is intended to keep the world focused on the fight against Russian aggression that is taking place in Ukraine.

As part of this initiative, Ukraine also launched in April a nation branding campaign with the slogan “Bravery. To be Ukraine.”

My research as a communications scholar has focused on the phenomenon known as “nation branding,” which refers to the process by which formerly communist nations such as Ukraine have, over the past two decades, utilized various marketing strategies in order to enhance their standing in the eyes of the international community.

However, Ukraine is the first country to officially launch a nation branding campaign while the country is still in the midst of a conflict. This is the first time that effective brand communication has played a significant role in the defense of a nation against a military invasion.

The beginning of the 21st century saw the emergence of the concept that nations can be branded in some way. To improve a nation’s standing in the eyes of the international community, this line of activity makes use of advertising, public relations, and marketing strategies. The timing of campaigns is frequently coordinated to coincide with significant events in the athletic, cultural, or political worlds, such as the Olympics.

Formerly communist nations in Eastern Europe were especially eager to rebrand themselves and establish an updated image on the international stage after the fall of the Berlin Wall and the collapse of the Soviet Union in 1991.

In 2001, Estonian musicians became the first post-Soviet country to win the international singing competition known as Eurovision. This achievement made Estonia the first country to hold this trophy. As a result, the government of the country decided to commission a contemporary national brand to be created for Estonia by an international advertising firm in preparation for Estonia’s hosting of Eurovision the following year.

However, research has demonstrated that the attempts of formerly communist countries to identify themselves as nations were not intended solely for consumption on the world stage. They also offered a fresh approach to the discussion of national identities within the country, as well as a re-imagining of national values and objectives in marketing terms.

However, until the year 2022, no nation had ever employed nation branding as a tactic to win a war.

Soon after Russia invaded Ukraine in February, executives from the advertising agency Banda in Ukraine presented the idea for Ukraine’s Bravery Campaign to the Ukrainian government for the first time. Before the war, the advertising agency, which had offices in both Kyiv and Los Angeles, had already worked on government-sponsored marketing campaigns to promote Ukraine as a destination for tourism and investment.

In a video message on April 7, Ukrainian President Volodymyr Zelenskyy supported and publicly announced the commencement of a wartime branding campaign that he had previously endorsed. He added that bravery is the hallmark of our company. “This is what it means to be us,” the speaker said. “To be Ukrainians. To be bold.”

During the following few months, Banda generated a large number of messages in a variety of mediums, including social media posts, T-shirts, stickers, and billboards; posters; online videos; and online posters. A website that is part of the campaign provides logos and images that can be downloaded, and it invites users to share the message of bravery and give to Ukraine.

On some billboards are depictions of brave Ukrainian citizens and soldiers who are going about their daily lives. The blue and yellow colors of the Ukrainian flag are used for the powerful words that are displayed on a number of the billboards. They encourage everyone in the crowd to “Be brave like Ukraine” and remind them that “Bravery lives forever.”

The campaign’s themes are displayed on a wide variety of mediums inside Ukraine, ranging from juice bottles to 500 billboards spread across 21 cities. According to AdAge, the campaign is also being conducted in the United States of America, the United Kingdom of Great Britain and Northern Ireland, and Canada, in addition to 17 nations in Europe, including Germany, Spain, and Sweden.

This tremendous effort to communicate is being carried out with very little financial impact to Ukraine. Banda is providing its services free of charge, and the government of Ukraine will only be responsible for covering production costs. Several of the world’s most prominent media corporations have generously contributed advertising space, which includes prominent billboards in Times Square and other important cities.

Pavel Vrzheshch, one of the co-founders of Banda, has stated that the campaign’s primary objective is to boost the morale of Ukrainians while they continue to battle Russia. According to him, though, the focus on bravery is also about the future of Ukraine.

Vrzheshch stated this sentiment in an interview with the media. “The entire world admires the Ukrainian bravery now,” Vrzheshch said. “We must consolidate this notion and have it represent Ukraine forever.”

At its foundation, the campaign aims to make an intangible quality, such as bravery, into an asset that can be transformed into tangible forms of support on multiple fronts, including the military, the economy, and the moral front. To put it another way, the objective is to foster a favorable public perception in Western nations so that they will back further aid to Ukraine so that it may be used in the conflict.

At least three aspects of this particular brand marketing strategy during a war have never been done before.

To begin, rather than depending solely on diplomatic channels to seek international support, Ukraine is making use of popular media and social media networks to appeal directly to residents of other nations. This is in contrast to the traditional approach of relying solely on diplomatic channels. It provides regular people all around the world with the opportunity to demonstrate their support for Ukraine by making financial contributions, spreading campaign messages, or putting pressure on their governments to do so.

A formally organized marketing strategy gives Ukraine the opportunity to enhance the war’s awareness beyond the realm of news coverage. It is anticipated that the war will become less prominent in the news headlines of international media outlets as it continues. However, maintaining visibility among audiences can be accomplished through the use of billboards, social media posts, and judicious deployment of entertainment publications such as Vogue.

In conclusion, the most effective marketing messages engage with customers by encouraging them to visualize themselves in a more positive light. This concept is depicted by well-known advertising slogans such as “Just do it” by Nike and “Think different” by Apple. Equally heartening is the Ukrainian government’s appeal to people all throughout the world to “Be brave like Ukraine.”

Brand consultants are quick to point out that it is notoriously difficult to quantify the performance of efforts aimed at country branding. The procedure is time-consuming and expensive, and the results are frequently challenged.

It is possible that it will take several months before the immediate impact of the Brave Campaign becomes apparent. In addition, it is not entirely clear for how much longer its message will continue to reverberate.

However, it is quite evident that Ukraine is adapting its nation branding to the modern era of consumer culture and constant stimulation from the media in order to create a new form of propaganda weaponry.