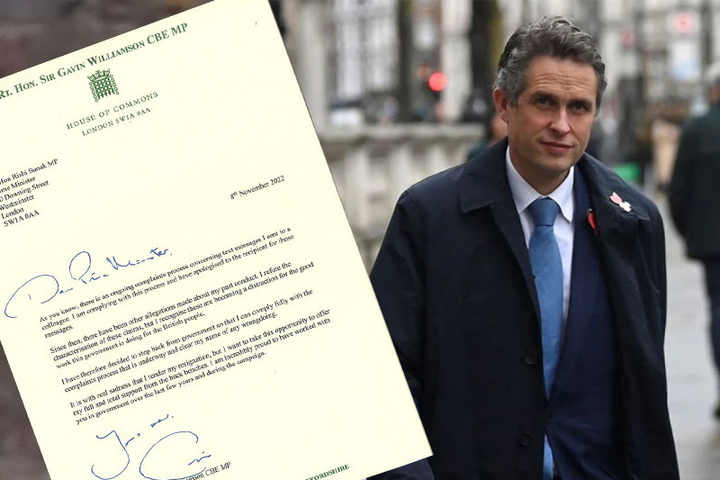 In October, Sunak became Britain’s third prime minister in two months, promising to restore integrity and professionalism to the heart of government after months of chaos under his predecessors, Boris Johnson and Liz Truss.

However, his first two weeks in office were overshadowed by controversies involving first his interior minister, Suella Braverman, and then Williamson, who was forced out of government for the third time in less than four years.

The Sunday Times and other publications stated that Williamson’s coworkers had accused him of behaving in a bullying manner, including sending profanity-laced communications and threatening a government official to “slit your throat.”

Williamson stated in a letter to Sunak on Tuesday that he was following with a complaints procedure and that, while he disagreed the interpretation of the communications, he acknowledged that they had become a distraction for the administration.

In the letter, which was released on Twitter, he stated, “I have thus decided to resign from government in order to comply with the ongoing complaints procedure and clear my name of any wrongdoing.”

I am submitting my resignation with deep regret.

In a letter of response, Sunak stated that he accepted the resignation with “with grief,” but he supported the choice.

In an effort to appease the conflicting factions of his party and form a stable government, Sunak picked ministers from all wings of the Conservative Party upon becoming prime minister in late October.

However, Williamson’s hiring raised questions. Williamson was sacked from his position as defence secretary in 2019 due to a national security leak, and again in 2018 when parents criticized his handling of the COVID-19 outbreak and schools as education secretary.

Sunak has also been criticized for rehiring Braverman to the interior ministry or Home Office less than a week after his predecessor fired her for violating email security regulations.

The Labor Party, the opposition, described Williamson’s departure as “a devastating reflection of a weak prime leader.”

“This is another another instance of Rishi Sunak’s poor judgment and lack of leadership,” Labour’s deputy leader Angela Rayner said in a statement.

The government and other ministers had earlier stated that, if accurate, Williamson’s statements were unacceptable, but that further investigation was required.