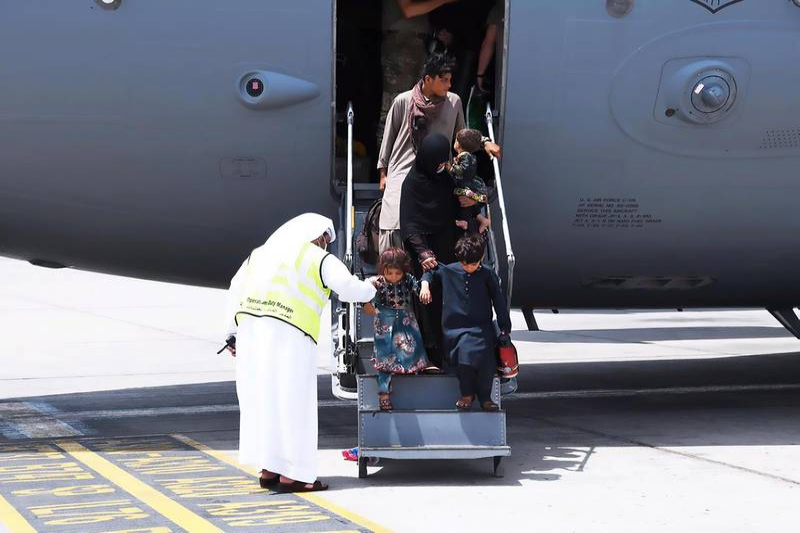 The UAE has been continuously working for the health and safety of millions of Afghans in the crisis-hit country. In line with the direction issued by Sheikh Mohamed bin Zayed Al Nahyan, Crown Prince of Abu Dhabi and Deputy Supreme Commander of the UAE Armed Forces, the UAE authorities are currently ensuring all possible efforts to provide social support and assistance to Afghan families on the Emirati soil.

As part of the initiative launched by Sheikh Mohamed bin Zayed, the UAE coordinated necessary efforts with world governments and non-government organisations to facilitate safe evacuation of officials, support staff and Afghan nationals through Emirati airports.

According to a WAM report, the UAE has safely evacuated approximately 40,000 Afghans and foreign nationals from Afghanistan through its national aircraft over the last few days. A recent statement issued by the UAE Ministry of Foreign Affairs and International Cooperation noted that the Emirati authorities will host about 5,000 Afghan nations evacuated from the war-ravaged country.

Taking note of the recent developments in Afghanistan, the UAE has intensified its humanitarian and relief initiatives in the land-locked country under the supervision of Sheikh Mohamed bin Zayed. It is the UAE’s noble legacy of humanitarian work that encouraged the authorities to provide assistance to thousands of Afghan women and children affected by the ongoing crisis after the takeover of the Afghan government by the Taliban group. As Afghans are taking refuge in other countries, UAE’s decision to accommodate them reflects its universal message of goodness and years of humanitarian work in the country.

Notably, the UAE has led some of the biggest humanitarian projects in Afghanistan over the past few years. In coordination with the Emirates Red Crescent and its armed forces, the UAE has ensured the provision of crucial aid and assistance in Afghanistan. From constructing schools, universities and mosques to setting up medical centres, the UAE has facilitated various necessary projects with the aim of providing a better standard of living to Afghan people. Recently, the UAE established the Sheikh Khalifa Bin Zayed Al Nahyan city in Kabul to provide residential housing to people in need.

Several world leaders have also recognised and hailed the UAE’s humanitarian operations in Afghanistan. Recently, US President Joe Biden and Spanish PM Pedro Sánchez thanked the UAE for its assistance in evacuating thousands of Afghan nations from the country. It is the vision and principles of UAE’s founding father, the late Sheikh Zayed, that are guiding the Emirati authorities to lead global efforts to help those in need and promote its friendly foreign policy.