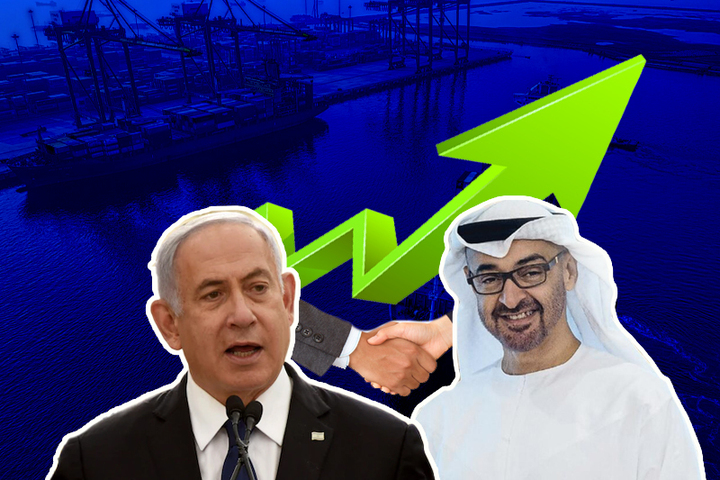 The UAE and Israel approved a free-trade deal on December 11, which is expected to generate $10 billion annually in bilateral economic activity by 2026, two years earlier than previously anticipated.

The Comprehensive Economic Partnership Agreement, which was signed for the first time in May following the historic Abraham Accords, would eliminate or lower tariffs on 96% of commodities traded between the two countries.

The Circuit cites UAE’s Minister of State for Foreign Trade Thani Al Zeyoudi as stating that there is a rising thirst in the area for further collaboration and cooperation. “Six Arab nations have now recognized Israel, and the benefits of these connections will accrue as economic flows expand.”

In the video interview with The Circuit, the minister was cited as stating, “I’m certain that via these interactions and the outcomes of our economic and bilateral trade, we’re sending a message to everyone about how vital and effective this collaboration is.”

Al Zeyoudi stated that he expects relations between the two nations to improve with the return of Benjamin Netanyahu as prime minister of Israel.

In the first nine months of 2022, non-oil commerce between the UAE and Israel reached $2 billion, an increase of 114% compared to the same time in 2021. This development will be accelerated by the agreement as the United Arab Emirates generates chances in important industries such as advanced technology, renewable energy, and food security.

The UAE-Israel Cepa was created to enhance global supply chain efficiency, notably for agriculture and food items, which would influence food security. It would also facilitate the movement of individuals, particularly the business sector.

The agreement, which is anticipated to have a significant catalytic effect on reciprocal investment flows, has created new export potential in the services and services-related industries. It improves market access for important UAE exports to Israel, including aluminum, petrochemicals, and polymers like ethylene and propylene.

According to investment consultants, Cepa will also facilitate investment flows into tourism infrastructure projects and increase the number of flights between the two countries, in addition to providing greater market access for UAE services exports, of which travel and aviation will reap the greatest rewards.

Since the signing of the Abraham Accords, the UAE and Israel have inked a number of key MOUs, since both economies share similar interests, including renewable energy, healthcare, advanced technology, water and food security, logistics and transportation, and space sciences.

The Abraham Accords’ Reality in 2022

The formalization of the UAE-Israel alliance has resulted in a significant reorganization of the Middle East’s political and security landscape by expanding Israel’s Arabian Peninsula allies.

The leaderships of the United Arab Emirates and Israel hailed the Abraham Accords as a significant diplomatic victory that would enable the two nations to more effectively pursue their respective national objectives.

Nearly two years after the signature of the Abraham Accords — U.S.-brokered accords repairing Israeli relations with the UAE and Bahrain — the optimism and promise embodied in this diplomatic triumph have shown themselves in a number of venues.

This is especially true between Israel and the UAE, as evidenced by the May 31 signing of a free trade agreement (FTA) between the two nations. Since the two nations decided to normalize their relations in 2020, there has been a steady progression of thawing ties and collaboration.

This FTA is unique in its own right, as it eliminates tariffs on the vast majority of products exchanged between the two countries and is thus expected to provide a significant boost to commerce and partnerships in a range of industries.

As so, it serves as a reminder that, contrary to much of the Abraham Accords’ interpretation, these accords are about far more than finding common security ground and confidence in the face of a shared Iranian danger.

Iran is a factor in the formation of these new alliances, but the economic, social, and technical benefits already generated by the agreements indicate that for all parties involved, normalization is as much about generating possibilities as it is about avoiding threats.

As a result, it is perhaps more remarkable that the FTA was signed in the immediate aftermath of escalating violence and tensions in Jerusalem, following a provocatively routed and conducted “Jerusalem Day” flag parade of extreme right-wing Jewish nationalists through a Palestinian neighborhood of the city, and a prior month of rising violence centered on increasing challenges to the historic Status Quo arrangement on Haram Al Sharif/Temple Mount.

In reality, the UAE foreign ministry criticized the “invasion of extremist settlers into the courtyard of the hallowed al-Aqsa Mosque under the cover of Israeli military” on the same day the FTA was signed.

In this post-Arab Peace Initiative environment, the message is clear: Jerusalem, notably Al-Aqsa mosque, remains vital to the Emiratis, but the future and fate of their developing connections with Israel will not hinge simply on the course of Israeli-Palestinian relations or the war and occupation. These agreements are durable and reliant only on national interests.