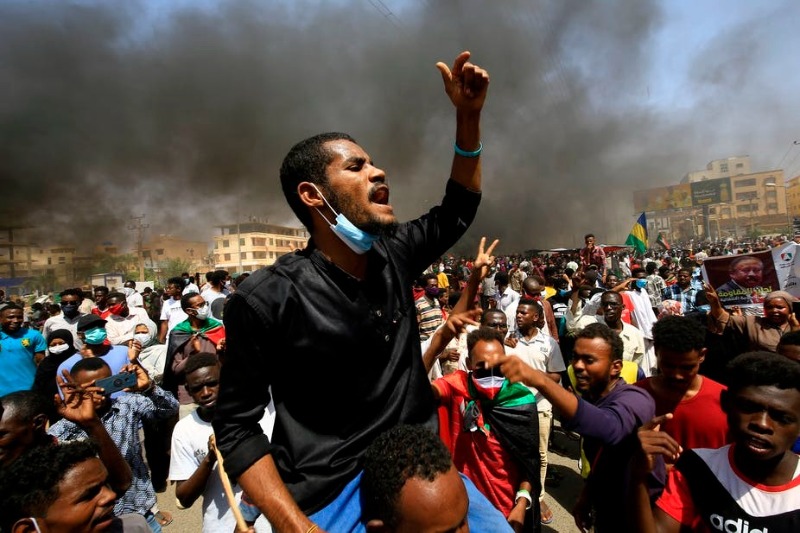 The Sudanese Revolution is still not over, waiting for Military Regime to fall

Even when tear gas and bullets rain down on them from the military’s guns, Sudanese people are still struggling for their rights, freedom and dignity in the face of an oppressive regime that refuses to budge.

Despite months of unrest and enormous protests, Omar al-Bashir was ousted from power in April 2019. After that, a government in transition was put in place. It anticipated a period of military rule before transferring control to civilians. The army, however, has never been committed to following through on these assurances, as the tragic events of October last year have shown.

Abdel Fattah al-army Burhan staged a coup one month before the transitional phase was supposed to be over, shattering people’s hopes for a democratic Sudan.

As a result of this, Sudanese did not keep quiet. For the past eight months, Khartoum has been the scene of weekly protests, which have been greeted with terrible violence by the security forces.

Usman, a 23-year-old activist, claimed that the military has killed 99 individuals since the anti-coup demonstrations began. There is almost always someone there who has lost someone they cared about. He pointed to someone’s keychain with a picture of a young man slain during one of the riots.

At the June 6 demonstration, a man named Usman witnessed the severe brutality of the soldiers.

There are particular areas of the city where protests normally take place, but the leaders of the resistance often announce a new location soon before the start of the event in order to confuse the security forces.

Around one o’clock in the afternoon, people arrived at the protest site, where people had already begun blocking the roadways with bricks and concrete blocks. Protesters were well-coordinated from the outset, and the atmosphere was relatively serene. People were chanting political songs, making noise, and halting automobiles in order to call the attention of others to what was going on in the neighborhood. People started running and saw what seemed like thick fog; the cops arrived and began blasting tear gas canisters at them just as someone stated, “I don’t think we’re going to be assaulted today.”

They awoke to find themselves huddled behind a shield, dodging rocks hurled by demonstrators in response to police force. Several hundred protesters began marching toward a nearby police station as the protest escalated. To add to the confusion, security personnel dropped sound-bombed tear gas canisters and protestors set fire to tires to disorient their opponents.

After a while, the cops started shooting into the throng. Even if it appeared as if they were merely trying to intimidate them, the possibility of being hit accidently was still great. A nursing student earlier had been wounded in the leg at a demonstration that had taken place just a week prior to this event. As a result, the crowd began to disperse.

“There will be no compromise or negotiation with the resistance.” As she stated emphatically, the protests will go on until they topple the coup and realize the magnificent revolution’s objectives from December 2018.

They may not have made any tangible progress that day, but they stood together as a team, united and hopeful. They were encircled by Sudanese demonstrators as the protest came to an end and the sun was about to drop. Everyone was smiling and shaking hands, despite their exhaustion, sand-covered bodies, and red eyes from the tear gas.

Ultimately, what Amani had said was true: Sudanese people will not give up until the military dictatorship is overthrown.