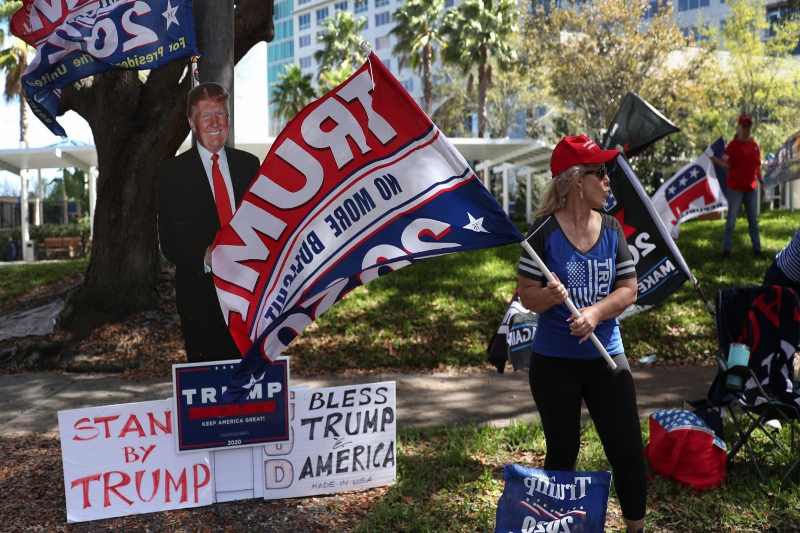 The return of Donald Trump, “I could run and win again”

“Hi CPAC. Did you miss me?”. So, Donald Trump greeted the crowd at the Orlando Conservative Political Action Conference. The former president has chosen the annual meeting of American conservatives for his first public appearance since his farewell to the White House. In a speech that lasted an hour and a half, alternating jokes and invectives, Trump again proclaimed that he had won the 2020 election.

He attacked Joe Biden; he is angry with the Republicans who voted for his impeachment in Washington and with the transgender people who embody the anti-American “cancel culture”. He ruled out, Trump, that he wanted to found a new party, but he also hinted at the possibility of taking the field in 2024. “You know, I might even decide to beat the Democrats for the third time,” he said, to the enthusiasm of those present that they punctuated a single sentence. “We love you!”.

Orlando’s 90 minutes have once and for all ruled out the possibility of Donald Trump disappearing from American public life. The 45th president is here to stay and, in any case, his themes, his obsessions, the harsh and exasperated tone of his conservatism have now made their way into the Republican party. Many of the speeches at the three-day CPAC in Orlando raised accusations of electoral fraud and the lament for the “lost heart of America”. It is above all on immigration that he beats: “I had made the southern border safe. I had put an end to human trafficking”. The illegal immigrants were being captured and sent home.

Biden, on the other hand, has already triggered a new humanitarian crisis …” He goes on more or less like this for over an hour. Repeating the old story of electoral fraud on several occasions along with other flagships of his election campaign: “the Chinese virus”, of course. But also, how Biden is in the hands of the extreme left that wants to promote socialism on the Venezuelan model. And, again, “we are committed to defending unborn children.”

If it is still too early to say with certainty that Trump will be the Republican candidate in 2024 – and if much of the Republican leadership breathes a sigh of relief at the news that there will be no independent Trumpian movement in the future – the tone and the words spoken by Orlando’s podium unmark Trump from the past and make him a cumbersome protagonist for years to come. The people of Orlando live in an alternate reality where Trump has won the 2020 election and there is a usurper in the White House.

The Republican party is now increasingly Trump’s party: and he reaffirms it by making one by one the names of the Republicans who did not support him, starting with Mitt Romney and ending with Liz Cheney. “Let’s get rid of them in the next elections. Dems are diabolical but they have the advantage of being united. We must be too.”

While Joe Biden and Congress are busy approving the $ 1900 billion economic stimulus bill in the capital, Trump also took the opportunity to severely chastise the new administration. “We knew Biden was going to be a bad president but none of us would ever imagine how bad this administration would be, and how far left it would fall.” Citing “a horrific new migration crisis on our southern borders” and Biden’s inability to reopen schools, Trump explained that “in just one short month we went from America First to America Last”. In front of an enthusiastically applauding audience, Trump showed that the foreigner theme is still the one that garners the most support in the conservative world. “Biden’s radical migration policies are not just illegal. They are also immoral, heartless, and are a betrayal of the founding values ​​of our nation.”

Vaccination drive in EU: Where the problem lies?
For America, The Pandemic Storm Has Not Passed
Subscribe
Login
0 Comments
Inline Feedbacks
View all comments