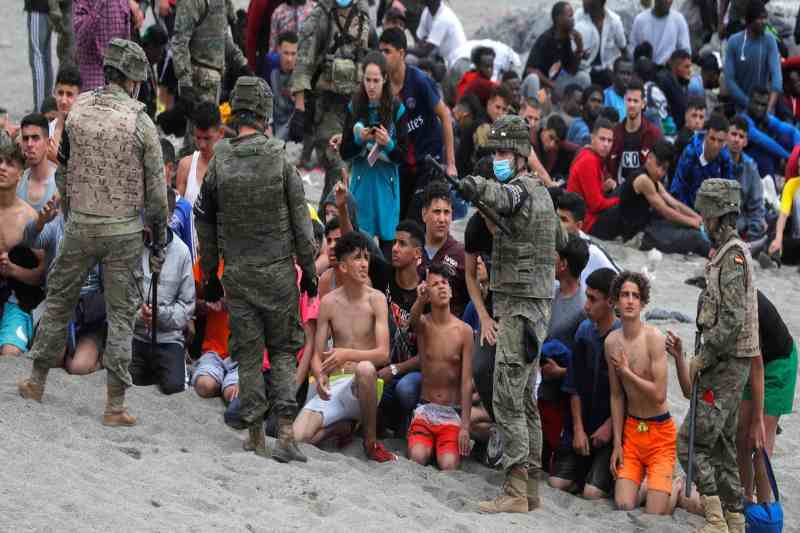 Thousands of migrants arrived in Spain last week. By swimming, on foot, crossing the border to reach Ceuta, a city of about 85,000 inhabitants and 14 square kilometers. In the first two days of the emergency, more than 8,000 migrants entered the city, through the breakwaters of Benzú, to the north, and Tarajal, to the south, due to the diplomatic impulse that Rabat has launched in Madrid. These are not only Moroccan citizens but also sub-Saharan migrants, rejected across the border by the Madrid authorities, who have deployed the army.

The Spanish government and the regions of the Iberian country have reached an agreement to ensure that the various territories take care of the reception of about 200 underage migrants housed in the enclave of Ceuta. This was announced by the Minister of Social Rights, Ione Belarra.

These are children and young people already present in Ceuta before the migratory emergency last week, which led to the arrival of more than 800 minors in a few days. Belarra explained that in this way there will be “enough space” in the enclave both to bring together children who have recently arrived after “being cheated” and who are now asking, together with their families, to “return to Morocco”, as well as those who wish to stay. in Spain. According to reports from the Spanish news agency EFE, the regions that will welcome the greatest number of migrant minors are the Valencian Community (25), Madrid, and Galicia (20 for each).

That Moroccan border guards have let migrants pass in retaliation for the hospitality granted by Madrid to Brahim Ghali, head of the separatists of the Polisario Front who are fighting Western Sahara in Rabat, is much more than a suspicion. “There are attitudes that cannot be accepted, there are actions that have consequences and we must take responsibility for them,” warned the ambassador of Morocco to Spain, Karima Benyaich. Words that are more than an allusion and dismantle the attempts of the Foreign Minister of Madrid, Arancha Gonzalez Laya, to deny the link between the Ceuta crisis and the reception of Ghali, who entered Spain from Algeria last April with a fake ID and is now in a hospital in Logrono to be treated for Covid-19.

On 23 April Gonzalez Laya had been forced to admit Ghali’s presence in Spain and had invoked “humanitarian reasons”. Three days later the Moroccan counterpart, Nasser Bourita, accused Madrid of “hosting on its territory the leader of a separatist militia accused of serious war crimes and serious violations of human rights”.

Crimes and violations for which Ghali is also wanted in Spain, although the Madrid magistrates have not yet subjected him to any restrictive measures. Today, even heavier words fly between the two diplomacies. Laya summoned Benyaich, who was later recalled to her homeland for consultations and expressed “disapproval” and “disgust” at the failure to comply with the agreements for the control of illegal migration.

Although half of the migrants arriving in Ceuta, mostly young men but also entire families, have already been pushed back across the border, hundreds of people are still crowded in front of the Castillejos wall, which separates Ceuta from the Rabat territory. The Moroccan police, according to the reporters present on the spot, sometimes allow some of them to climb over or pass under the metal barrier, sometimes try to prevent it, but often end up being overwhelmed by the large mass of people.