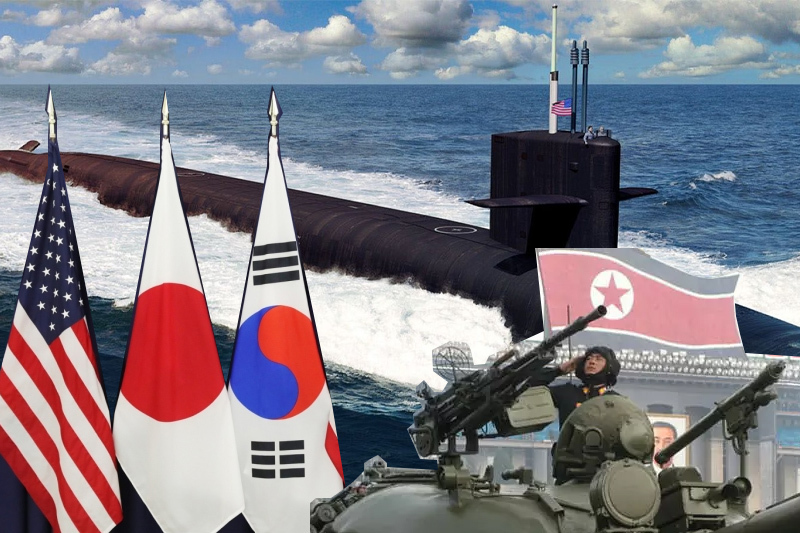 South Korea, US, and Japan will hold anti-submarine drills amid North Korea concerns

On Friday, September 30, the naval forces of South Korea, the United States, and Japan will hold their big anti-submarine drills for the first time in five years. This comes as tensions rise over North Korea’s recent missile tests.

The drills will take place in international waters off the east coast of the Korean peninsula, just one day after North Korea fired two ballistic missiles toward its east coast and US Vice President Kamala Harris visited Seoul and the heavily fortified border between the two Koreas.

In a statement, the South Korean navy said, “The exercises are meant to improve their ability to deal with North Korea’s growing submarine threats, such as its submarine-launched ballistic missiles (SLBM), at a time when it keeps posing nuclear and missile threats with a series of ballistic missile tests.”

The one-day drills are the most important maritime training that hasn’t been done since 2017. This is because the former progressive South Korean government wanted to improve relations between the two Koreas and make it easier for Pyongyang and Washington to talk about denuclearization, but those talks have been stuck since 2019.

A South Korean military official said that as part of the program, the navies of the three countries will work together to find a fake North Korean submarine and share information about it.

The South Korean navy said that the exercises will include the aircraft carrier USS Ronald Reagan, the 9,800-ton guided missile cruiser USS Chancellorsville, the 6,900-ton Aegis-equipped destroyer USS Barry, the 4,400-ton destroyer Munmu the Great from South Korea, and the 5,100-ton tanker Asahi from Japan.

A US think tank said a few days before the drills that commercial satellite images showed that North Korea might be getting ready to launch a new submarine that could fire ballistic missiles.

Yonhap, a South Korean news agency, reported on Saturday that the South Korean military has seen signs that the isolated country might be getting ready for an SLBM test.