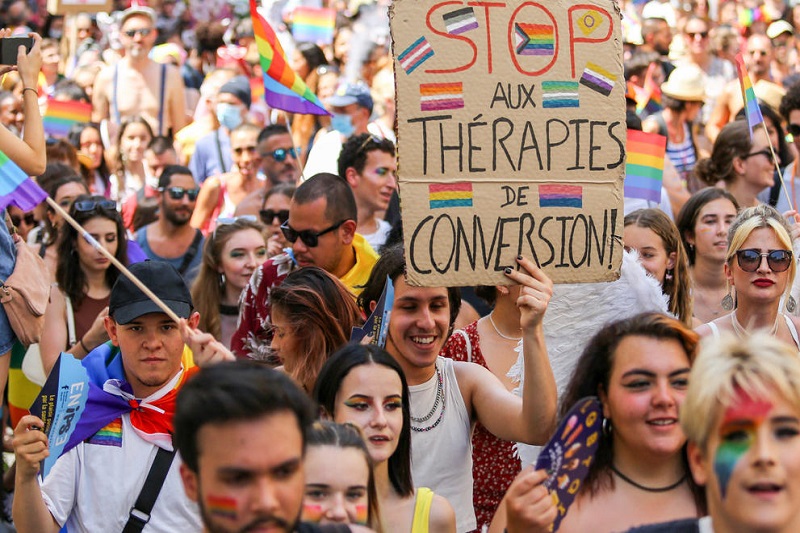 A landmark new law has been passed by the National Assembly of France that has banned and criminalized LGBT community members’ “conversion therapies”. The law now authorizes imprisonment and fines for practitioners who allegedly use “scientifically discredited practice” in attempt to change or convert sexual orientation and gender identity of members of LGBTQ community. The law was passed on Tuesday evening by the National Assembly unanimously with votes 142-0.

Under the legislation, criminal penalties can be imposed on people who are convicted for trying to attempt “conversion” of LGBTQ people to heterosexuality or traditionally expected gender identity. The law further offers the possibility for rights campaigners and activists to file civil suits on behalf of the victims. The parliament has hailed this step as a breakthrough for individuals who hesitate or are unable to report this to the police themselves.

Lawmaker Laurence Vanceunebrock, who was instrumental in steering the law’s passage through parliament, said the new law will target “all those who equated an identity or a sexual orientation with sickness.” “There is nothing to cure,” she told the National Assembly.

The new law projects sustained efforts “that aim to modify or reprimand sexual orientation or gender identity” and which “impact the physical or mental health of victims” are deemed punishable for a period of up to two years in jail and 30,000 euros ($34,000) in fines. The punishment can further be increased to three years imprisonment and fines of 45,000 euros ($50,000) for cases involving minors or other vulnerable people.

The law will be in effect in the next 14 days after President Emmanuel Macron’s signoff on the legislation. Macron has lauded the passage of this new law. “Let’s be proud of it,” the French leader tweeted. “Because being oneself is not a crime.”

France’s equalities and diversity minister, Elisabeth Moreno, has condemned the practice of conversion therapy as “barbaric” and has stressed that “very often it leaves permanent marks on bodies and minds” of those who are victims of this practice.