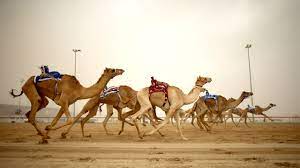 The fourth documentary from the Emirates News Agency (WAM), “Camel Race Secrets,” highlights the Emirati history of camel racing, one of the UAE’s traditional sports.

The 12-minute video, which was aired in 13 different languages, highlights the historical and cultural facets of camel racing in the United Arab Emirates as well as the relationship between camels and Emirati culture and how it influenced the formation of the national identity.

The documentary also discusses the UAE’s international leadership role in camel racing, which led to its emergence as the sport’s epicentre. The late Sheikh Zayed bin Sultan Al Nahyan promoted the ancient sport, and the government of the nation has carried on his heritage.

In light of recent advancements in veterinary care that have made sophisticated procedures possible despite their vast proportions, the video also emphasises the UAE’s camel-centric paradigm, which has allowed the nation to make progress in all areas relating to camel breeding.

The documentary also reveals the genetic secrets behind camels’ high levels of performance as well as the considerable advancements made in the field of nutrition. It also sheds light on the mysteries surrounding camel racing in the desert.

The movie also demonstrates the leadership of the UAE’s interest in and support for the preservation of this genuine historical heritage, as well as its directives to establish festivals that cross national boundaries, to present races full of vigour and strength with sizable prizes and fierce competition, which have been taking place for decades.

The film uses real-time footage from racetracks to depict the beginning of a race as the heat of the day increases during the mounting of the mounts and the installation of necessary equipment. It also emphasises the value of camels by showing how they draw buyers from all over the world to auctions where a million-dollar camel was sold.

The movie depicts night racing on the racetrack in Dubai, where spectators gathered to cheer on the inaugural women’s camel race before it started.

As a result of Emirati purchase agreements for wild camels in the 1990s, camel racing experienced a surge in popularity. The video also features a camel race in Australia and discusses the history of the growing Emirati camel racing industry.

The diversity of the Emirati population and their affection for camels, an essential component of their rich cultural history, were then brought to light in the documentary.

The documentary, according to Mohammed Jalal Al Rayssi, Director-General of WAM, is one of many created by WAM with the goal of promoting the UAE’s culture to the rest of the globe and showcasing its overall accomplishments.

He added that the film highlights the UAE’s eminent position in the world as well as its history of camel racing, as it has grown to be the camel racing world centre.