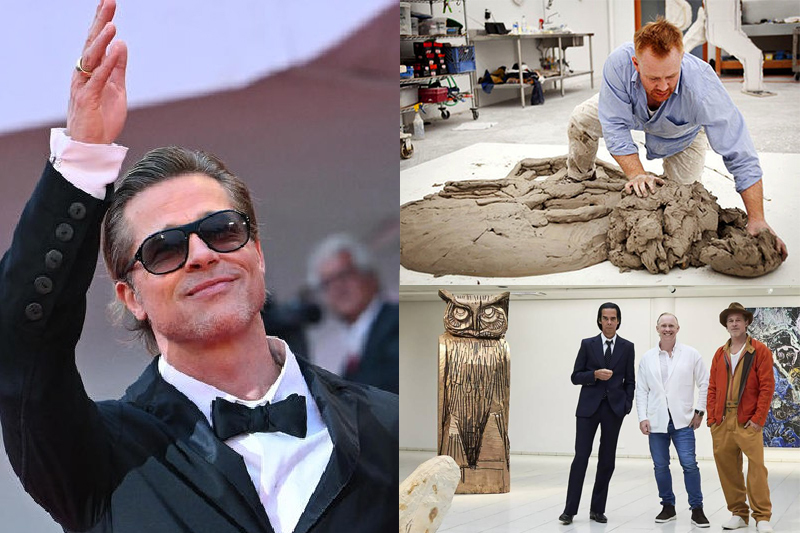 Brad Pitt, the famous Hollywood actor has made his debut as a sculptor, in a group art show at the Sara Hildén Art Museum in Tampere, Finland. The artworks by the A-List actor appear alongside the works by musician Nick Cave and the artist Thomas Houseago for the exhibition “We”, which will be on view until January 15, 2023.

There are a total of nine artworks by Brad Pitt on show. These include a house shaped structure molded in clear silicon and shot with bullets, and his first ever sculpture “House A Go Go” – made in 2017, it is an 18 inch miniature house made out of tree bark, crudely held together with tape. The largest art pieces by Pitt include a coffin sized bronze box that depicts hands, feet and faces which appears to be attempting to break through the structure at various angles. Another is the plaster wall hanging sculpture “Aiming At You I Saw Me But It Was Too Late This Time,” from 2020, that is depicting a gun fight between eight figures.

In an emailed statement to The Art Newspaper, Mr. Pitt said about his artistic angle, “For me it’s about self reflection… It was born out of ownership over what I call a ‘radical inventory of the self’. And getting really brutally honest with me and taking account of those I may have hurt and the moments I’ve just gotten wrong.” The actor had reportedly began trying his hand at sculpting and pottery after his divorce from actress Angelina Jolie. He would reportedly spend up to 15 hours a day in Houseago’s Los Angeles studio back in 2017 to cope with the divorce. He told GQ that he regarded “his pursuit of ceramics not as art, but as a solo, very quiet, very tactile kind of sport”.

Australian singer and songwriter Nick Cave is also making his artistic debut at this exhibition. According to a press release, he shows “glazed ceramic figurines depicting the life of Satan in 17 stations, from innocence through experience into confrontation of our mortality.”