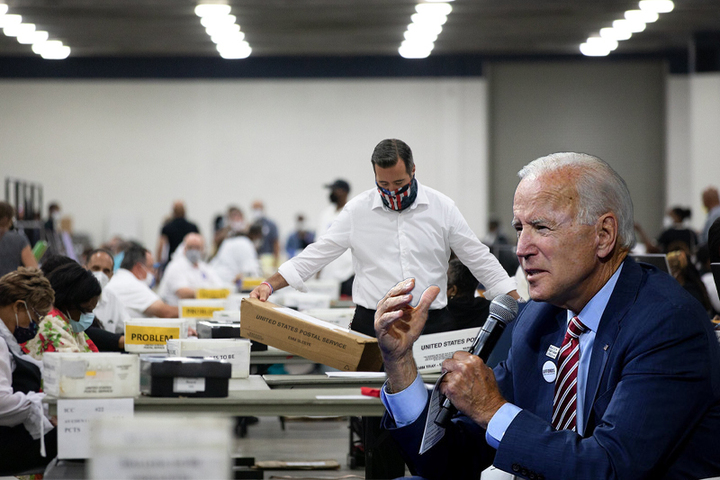 President Joe Biden stated on November 2 that threats by some Republican candidates to refuse to accept election results on November 8 if they lose are a threat to democracy and that former President Donald Trump inspired them.

“Make no mistake, democracy is on the ballot for all of us,” President Joe Biden said in a speech only days before Americans vote on whether Democrats retain control of the US Senate and House of Representatives or cede power to Republicans.

Paul Pelosi, the husband of US House Speaker Nancy Pelosi, was attacked with a hammer at their home in San Francisco less than two years after the attack on the US Capitol on January 6, 2021. Biden, speaking at Union Station near Capitol Hill, cited this incident as evidence that democracy is under threat.

“The attacker entered the house and demanded, ‘Where’s Nancy? Where is she? These were the exact words spoken by the mob when they invaded the United States. Capitol on Jan. 6,” Biden remarked.

He asked voters to “consider carefully the current situation”

“As I stand here today, there are candidates for every level of government in America — governor, Congress, attorney general, secretary of state – who refuse to accept the outcomes of the elections they’re in,” he remarked.

Biden stated that election skeptics are motivated by Trump, who is considering a bid for president in 2024 at the same time Biden is deciding whether to pursue a second four-year term.

Biden stated that “American democracy is under threat” because to Trump’s refusal to accept the results of the 2020 election, which Biden won.

Biden stated, “He refuses to recognize the decision of the people and refuses to understand that he lost.”

Former President Barack Obama has also highlighted worries about the condition of democracy.

Obama, speaking late Wednesday night at a Democratic event for state candidates in Arizona, reflected on earlier movements to ensure that women, African-Americans, and other oppressed groups could participate in a democracy that he said was now at peril.

Biden, who along with Obama is engaged in a flurry of campaigning for Democrats in the final days preceding next Tuesday’s midterm elections, faces the potential that Republicans may gain control of Congress, which would thwart his plan.

According to the majority of midterm predictions, the House will almost certainly be won by the Republicans, but the Senate is a toss-up.

Biden stated that “the fate of the nation” rests with the people, and he concluded his 20-minute speech on an upbeat note.

“My fellow Americans, this moment has arrived. Simply, we must remember who we are. The United States of America are our nation. We can do anything if we work together,” he remarked.

Voter fraud is extremely uncommon in the United States, although many citizens remain concerned. Monday’s Reuters/Ipsos poll indicated that 49% of Americans believe widespread voting fraud is a problem, with 34% of Democrats and 68% of Republicans sharing this view.

44% of Americans, including 28% of Democrats and 62% of Republicans, are concerned that the US election is rigged.

Despite these concerns, 67% of respondents, including large majorities of Democrats and Republicans, were sure that their personal ballots would be accurately tallied.