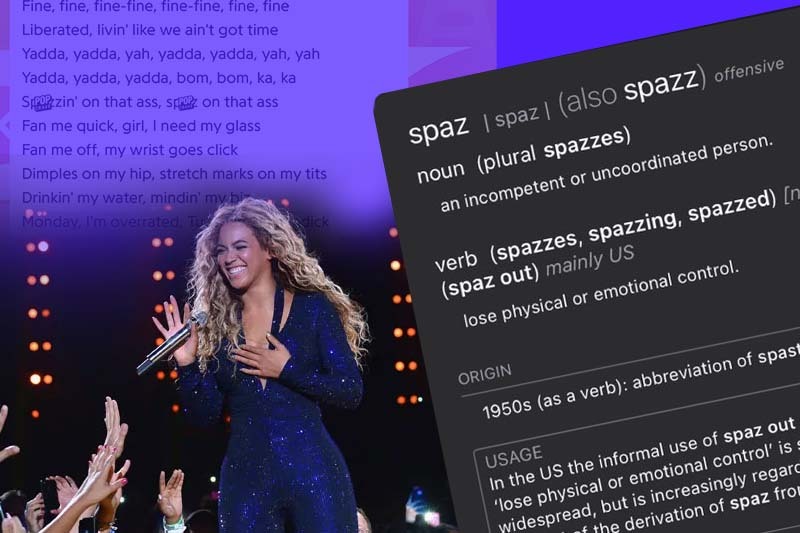 Beyonce will remove a pejorative phrase for disabled people from her new song “Heated,” according to a spokesman for the singer, who made the announcement on Monday (1 August), after its use was slammed as insulting by activists.

The American pop megastar will redo the recording of the song “Spazzin’ on that ass, spazz on that ass” from her most recent album Renaissance. The previous version of the song included her singing the words.

A spokesman for Beyonce told AFP via email that the phrase will be changed because it was not used intentionally in a detrimental way. “The term will be replaced.”

The dance music, which was written in collaboration with the Canadian rapper Drake, appears to employ the word “spaz” in the colloquial sense of behaving erratically or briefly losing control.

However, advocates for people with disabilities pointed out that the word comes from the word “spastic.”

Spasticity is a movement issue that affects 80 percent of persons who have cerebral palsy, according to the Centers for Disease Control and Prevention. This disorder causes muscles to become rigid, which results in uncomfortable movement.

Lizzo, a musician from the United States, re-recorded her song Grrrls in June in order to eliminate the same term after receiving feedback that it was offensive.

The inclusion of the word by Beyonce, according to Australian disability activist Hannah Diviney, “feels like a slap in the face to me, the disabled community, and the progress we sought to accomplish with Lizzo.”

According to one of her tweets, she plans to “guess I’ll simply keep pushing the whole industry to ‘do better’ until ableist insults disappear from music.”

The highly awaited seventh solo studio album by Beyonce, titled Renaissance, was finally made available for purchase on Friday. The album has received mostly excellent reviews due to its references to disco and electronic dance music.

Other artists who contributed to the album include Nigerian singer Tems, Nile Rodgers, Skrillex, Grace Jones, Pharrell, and Beyonce’s husband Jay-Z, who is a rap industry tycoon. The album was leaked online in the days leading up to its official release.

Beyonce stated that the process of crafting the album “gave me a place to dream and to find escape amid a scary moment for the globe.” This statement was made in an Instagram post that was released shortly after the release of the album.

She stated in her writing that “my objective was to establish a secure environment, a place without judgment.”

“A place where perfectionism and excessive thought are not tolerated. A place to shout, let go, and experience the feeling of liberation.”