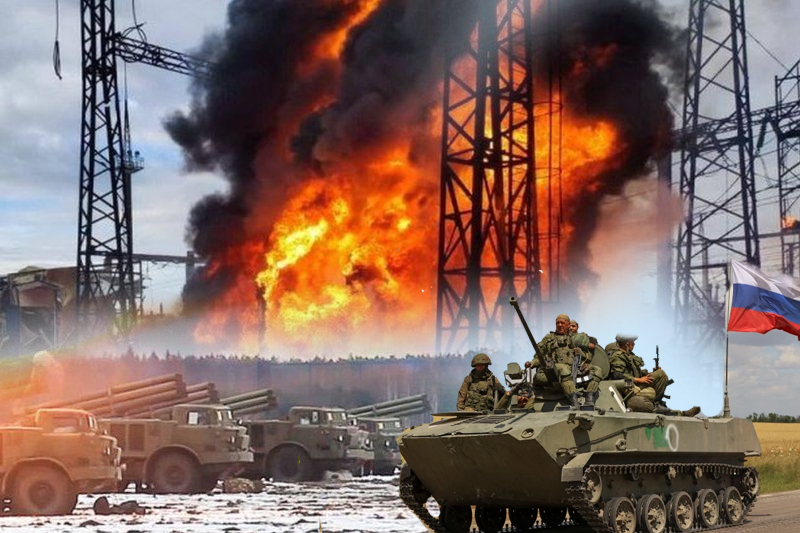 As snow fell in Kyiv, Ukrainian President Volodymyr Zelenskiy predicted that Russia will launch more missile attacks against his nation and advised defense troops and residents to brace for another week of strain on the electrical infrastructure.

After days of Russian attacks, city officials reported that workers were close to finishing the restoration of power, water, and heat, but heavy demand necessitated the imposition of partial blackouts.

“We believe the terrorists are plotting further attacks. We are certain of this,” Zelenskiy said in his nightly video message on November 27. As long as they possess missiles, they will be unable to calm down.

Zelenskiy stated that the upcoming week could be as challenging as the last one, when attacks on energy infrastructure caused the most severe power outages in Ukraine since the Russian invasion in February.

Moscow has no response to Zelenskiy’s assertions.

Since Russia’s invasion of Ukraine on February 24, Moscow has stated that it does not target civilians. Thursday, the Kremlin stated that Kyiv could “stop the misery” of its inhabitants by complying with Russia’s requests.

In September, Russia annexed large portions of Ukraine’s east and south, and President Vladimir Putin has stated that Moscow’s territorial claims are non-negotiable. After the annexation, Zelenskiy stated that he would not negotiate with Moscow and that the territorial integrity of Ukraine is inviolable.

There were no deadly strikes on Kiev or other large cities on Sunday. According to Ukraine’s central army command, Russian forces in the Dnipropetrovsk region launched four missile attacks and shot many times on civilian targets.

According to Zelenskiy, intense battle raged along the front lines in many regions of Ukraine, particularly in the eastern Donetsk region.

Sunday, the General Staff of the Ukrainian Armed Forces reported that Russian troops had shelled a dozen villages in the Donetsk region’s eastern sector, including the primary objectives of Bakhmut and Avdiivka.

Oleh Zhdanov, a Ukrainian military expert, reported that Russian forces had made many unsuccessful attacks on the village of Soledar, located near Bakhmut, and suffered serious losses in a separate push against Avdiivka.

He stated on YouTube that heavy fighting was also occurring in the northeastern district of Kharkiv, close to regions regained by the Ukrainian army in September and October.

In recent weeks, Moscow has targeted critical infrastructure with waves of airstrikes that have caused massive power outages and killed civilians.

As the weather becomes colder, the number of attacks has grown, resulting in an increase in energy demand as repair crews rush to restore damaged power plants.

New attacks on Wednesday caused the biggest damage to date in the nine-month conflict, leaving millions of people without electricity, running water, or heating as temperatures dropped below 0 degrees Celsius (32 degrees Fahrenheit).

Zelenskiy stated that utility and emergency workers were working around the clock to restore power, and that the situation was “in control” despite scheduled blackouts in most locations to help restore the grid.

In Kherson, a city in southern Ukraine abandoned by Russian soldiers last month, 17% of customers now have power, according to regional governor Yaroslav Yanushevych. Other districts will be linked in the coming days.

Zelenskiy criticized Vitali Klitschko, the mayor of Kiev, stating that he had not done enough to aid the city’s citizens. Klitschko, a renowned professional boxer, responded that political infighting during Russia’s military effort was “senseless.”

The chairman of Ukraine’s state-run nuclear energy company stated on Sunday that there are indications that Russian soldiers may be planning to withdraw from the massive nuclear power plant in Zaporizhzhia that they seized in March. Repeated shelling around the nuclear power station has sparked worries of a nuclear disaster.

Petro Kotin, the head of Energoatom, stated on national television, “It appears as if they are packing their bags and grabbing everything they can.”

Along with energy, the war has interrupted food supplies, with Ukraine’s grain exports unlikely to surpass 3 million tons in November, down from 4.2 million tons in October, as Russia attempts to limit ship inspections, according to Ukraine’s Infrastructure Minister Oleksandr Kubrakov.