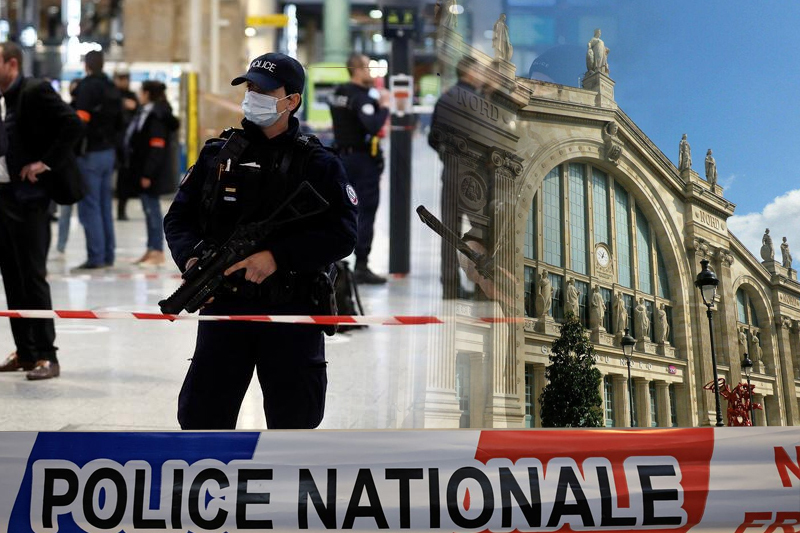 The unnamed assailant was shot and wounded by off-duty police officers who were going home and by border police, Darmanin said, praising the swift intervention of police for helping prevent any fatalities.

The suspect used a metal hook in the incident, according to the public prosecutor.

He first threw himself upon a 36-year-old man outside the train station, stabbing him 15 times, before entering the station and attacking four civilians – one male passenger aged 41 and three female passengers aged 40, 47, and 53 – and a 46-year-old police officer, French media reports said. According to officials, the man stabbed in front of the station was the only person who sustained serious wounds in the attack.

While the suspect was attacking the police officer, screams alerted two other officers who intervened. The policeman who is part of the border police at the Gare du Nord was stabbed in the back but not seriously wounded because of a bulletproof vest, Darmanin said.

Multiple shots were fired. The attacker, who was said to be in critical condition, has since been hospitalised and is undergoing surgery after being shot twice in the chest and once in the right arm. Investigators have not been able to interrogate him.

Darmanin said the suspect’s weapon was likely homemade and that investigators haven’t discovered any extremist links.

Nevertheless, while Wednesday’s incident is currently not being investigated as terror-related, it is the second in two months. In December, a man who was being investigated at the time for racist violence shot and killed three Kurdish activists in Paris.