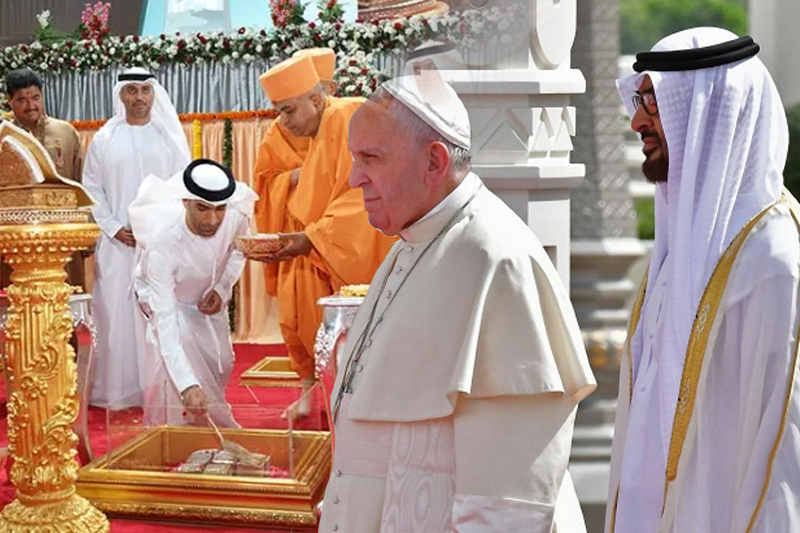 uaes role in promoting interfaith dialogue and bringing people together

UAE’s role in promoting interfaith dialogue and bringing people together

Through the sponsorship and hosting of numerous international events and forums aimed at fostering dialogue and interaction between various religions and cultures as well as promoting the values of tolerance, moderation, and coexistence among all peoples and societies, the UAE has long led international efforts to promote religious dialogue and rapprochement.

In keeping with the nation’s historical legacy of religious tolerance and embracing diversity and its strategic direction in establishing peace and spreading love and goodness throughout the world, the UAE annually hosts a number of international events that have evolved into a global platform for dialogue and rapprochement between religions.

The G20 Religious Values Forum Association and the Alliance of Religions for Communities Security jointly organised the “G20 Interfaith Forum,” which was officially opened yesterday, Monday, under the theme “Involving interfaith communities in setting the agenda of the G20 summit and beyond.”

In order to serve as a transition between the summit held in Indonesia and the announcement of the G20 agenda to be held in India in 2023, the conference intends to involve communities and leaders of religions and crystallise their views on the agenda of the G20 leaders’ summit.

Hosting the event exemplifies the UAE’s commitment to fostering communication among different civilizations and cultures and to erecting bridges of trust between the peoples of the world, as well as its vision of wise leadership. in a manner that advances the consolidation of societal stability and security as well as the accomplishment of all-encompassing development objectives.

A conference on “Religious Diplomacy…International Opportunities and Challenges” was held in October by Sorbonne University Abu Dhabi and the Anwar Gargash Diplomatic Academy. It was attended by academics, clerics, notable diplomats, and subject matter experts from all over the world and provided an opportunity to talk about the significance of religious diplomacy and interfaith dialogue.

Three facets of religious diplomacy were explored at the conference, including its usefulness in resolving disputes by identifying the parties in favour of interfaith cooperation and cultural pluralism. A potent weapon for influencing a state’s foreign policy is religious diplomacy.

The Global Alliance for Tolerance initiative was established by the Ministry of Tolerance and Coexistence in November 2021 during Expo Dubai 2020 festivities. It calls for stepping up international efforts to spread a culture of tolerance among all peoples and nations. It also served as the official inauguration of the World Interreligious Summit, which brings together influential world leaders every year.

Building stronger bridges between the various religions and ideologies in the world and concentrating on what unites people from shared perspectives on human values are the goals of this gathering of leaders of various religions and laws, well-known thinkers from various countries around the world, as well as representatives of a number of pertinent global and regional institutions.

Following the signing of the Human Fraternity Document in Abu Dhabi on February 4 by His Holiness Pope Francis, Pope of the Catholic Church, and His Eminence the Grand Imam, Dr., it became a document that unites all religions, races, and colours in the globe.

Following the signing of the agreement, the General Assembly of the United Nations unanimously decided to declare February 4 of every year to be the International Day of Human Fraternity. This declaration calls for adherence to the principles of dialogue, understanding, and a culture of tolerance among people as well as calls for coexistence between religions.