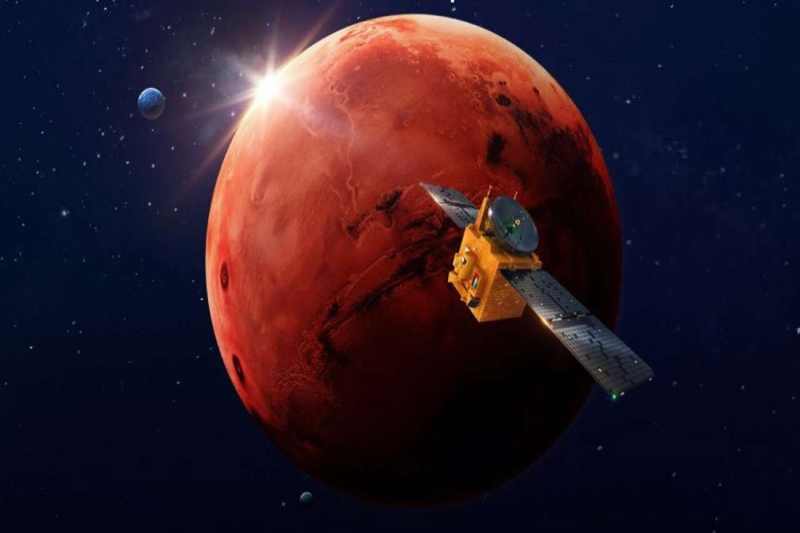 Emirates as its Hope spacecraft, which was launched from Earth seven months ago, was about to enter Mars’ orbit.

Emirates expects it to land on Mars on Tuesday sometime between 5 to 7 pm. It would help it to initiate its probe around Mars. The Emirates authorities confirmed that the spacecraft successfully entered Mars in the evening at about 7:42 pm local time, and sent a signal back to Earth. The spacecraft was moving at a speed of over 120,000km/h (75,000mph). The space scientist expected it to shut off its engines for 27 minutes to enhance its chances of catching Mars’ gravitational pull. It’s a huge leap for the nation, which did not have full experience in interplanetary missions and only recently started with launching satellites in Earth’s orbit in 2009.

The project director, Omran Sharaf told BBC News, “We’re entering a very critical phase. It’s a phase that basically defines whether we reach Mars, or not; and whether we’ll be able to conduct our science, or not. If we go too slow, we crash on Mars; if we go too fast, we skip Mars.”

The entire success of the mission rested on the spacecraft’s orbit insertion, for which its speed was required to come down to about 18,000km/h. Earth and Mars are about 190 million km apart, hence for any radio command to reach Hope would take 11 minutes. The mission leaders said that that’s why they didn’t have much control over it and hence the entire mission relied on the spacecraft’s speed manoeuvre. Few months ago, engineers at the Mohammed bin Rashid Space Center (MBRSC) in Dubai, reduced Hope’s space trajectory to bring it in sync with its braking burn to make it reach Mars at the precise time as planned. The mission was launched six years ago in order to make it land on the red planet at the time of the UAE’s golden jubilee The Emirati federation was founded on 2 December 1971.

The propulsion engineer Ayesha Sharafi said, “It’s definitely going to be nerve-racking; just thinking about it gives me goose-bumps. But we do have a fault-protection system in place that can compensate for any problems that might happen during the burn, so I think we’re in a good position for Mars orbit insertion to happen successfully.”

The Hope probe would enable UAE to study whether or climate on Mars, and help gather more information about its atmosphere. It would also help scientists capture information regarding energy flow through the atmosphere – from bottom to top, throughout the day, and through all the seasons of the year. Besides, the mission handlers added that Hope would also get clear images of the whole of the planet on regular basis.

“Any image we got of Mars would be iconic but I just can’t imagine what it’s going to feel like to get that first full-disk image of Mars, once we’re in orbit,” said Sarah Al Amiri, the Emirati minister of state for advanced technology and chairperson of the UAE Space Agency. “And for me also, it’s getting that science data down and having our science team start analyzing it and finding artifacts that haven’t been discovered before”.