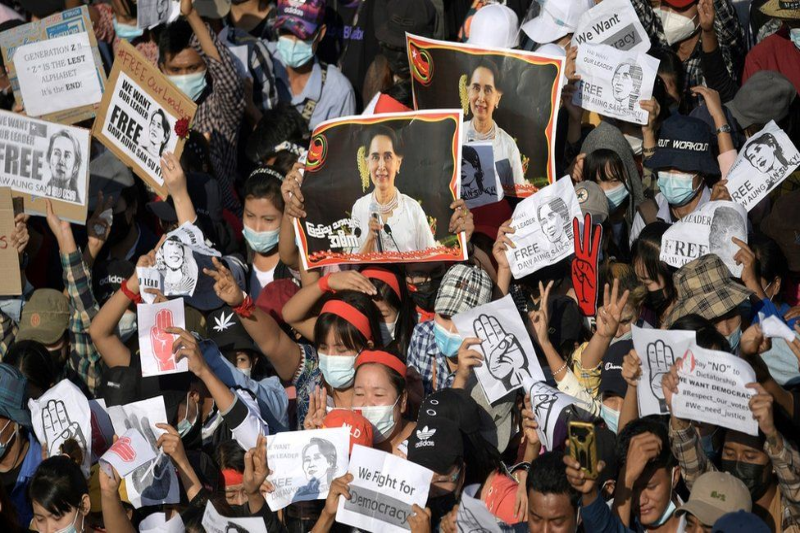 Myanmar’s junta on Monday declared curfew in the country’s two biggest cities amid growing protests against last week’s military coup. As widespread demonstrations entered the third day, the new military rulers of the country banned public gatherings of more than five people in order to control the protesters.

However, thousands of people defied the ban on public gatherings to join nationwide protests against the military removal of elected leader Aung San Suu Kyi. Military moved soldiers with water cannons to Myanmar’s capital Naypyidaw, Yangon and other major cities in order to disperse the protesters. As soldiers entered to the cities, they blocked roads and forced protesters to retreat.

Significantly, protesters have also taken over social media platforms such as Twitter and Facebook to voice their demands for the release of civilian leaders including Aung San Suu Kyi, and the withdrawal of the military from the government.

Myanmar’s junta leader Senior General Min Aung Hlaing on Monday issued the first televised address since the coup, vowing to hold fresh elections after the year-long state of emergency in the country. He further reiterated his claims of voter fraud in November’s election which was won by Suu Kyi’s National League for Democracy party (NLD) with a landslide majority.

“We will have a multiparty election and we will hand the power to the one who wins in that election, according to the rules of democracy,” he said.

Justifying the military’s seizure of power, Min Aung Hlaing claimed that the country’s Election Commission did not allow fair poll campaigning by using the COVID-19 pandemic as an excuse. Calling the coup “unavoidable”, Min Aung Hlaing also asked the protesting public to cooperate with the military for the “good of the country.”

Meanwhile, the electoral body has rebuffed the army leader’s allegations, maintaining that any irregularities in election results would not have changed the overwhelming vicotry of Suu Kyi’s party. Min Aung Hlaing has declared the formation of a new election commission to inspect the voting procedure.

Suu Kyi, along with other senior members of the NLD party and government officials were detained by the military last week. In addition, several legislators and human rights activists have been detained since the coup.

The military also issued Martial law in a number of cities, warning anti-coup protesters against further demonstrations. The first wave of protests were led by members of the Students Union across various regions, with engineers, teachers and monks joining in later days. Holding posters and banners with portraits of Suu Kyi’s face, thousands of protesters chanted anti-coup slogans while demanding the removal of military and release of detained elected lawmakers.

After the coup, the army also intermittently blocked internet, mobile data networks, and social media websites to counter dissent across the country.

Reportedly, United Nations (UN) Secretary-General Antonio Guterres has been reaching out to Asian governments to lead a collective and bilateral action for the reversal of the military coup in Myanmar.

“The Secretary-General continues to follow the situation in Myanmar closely and with grave concern. He and his Special Envoy have been reaching out to key international actors, including regional leaders, in calling for collective and bilateral action to create conditions for the recent coup in Myanmar to be reversed,” Spokesman for the Secretary-General Stephane Dujarric said on Monday.