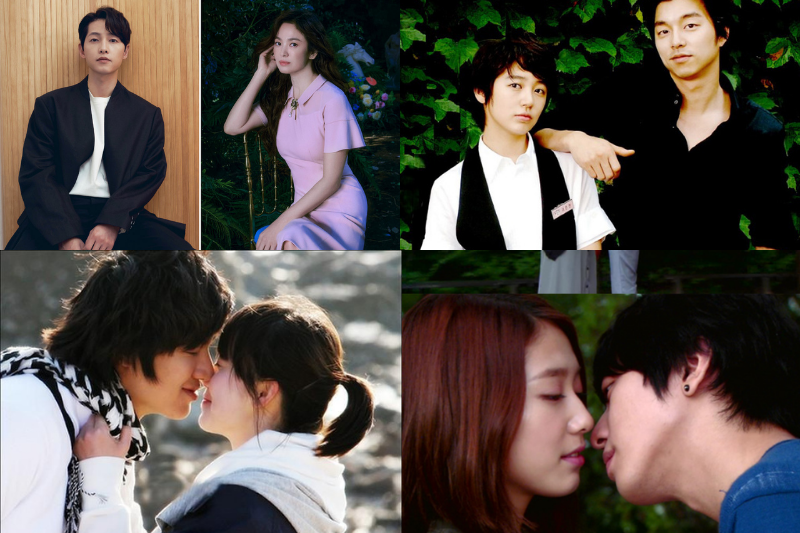 Many love teams and on-screen couples are introduced to viewers that watch a lot of Korean dramas. Seeing the beautiful chemistry between the series’ leading man and leading lady will make us wish they were real-life partners. Here are the top 10 best Korean drama couples we’ve seen so far in the many popular K-dramas.

Park Shin Hye’s charming partnership with the handsome singer-turned-actor Jung Yong Hwa (from the K-pop boy group CNBLUE) began in the film You’re Beautiful, in which Yong Hwa played the guy with concealed feelings for Shin Hye. When they starred in Heartstrings in 2011, their love developed even more.

They are very good friends in real life and look stunning together. Yong Hwa expressed his feelings towards Shin Hye during the press conference for Heartstrings, saying, “I feel so comfortable around Park Shin-hye, she’s like a member of (his group) CNBLUE.” “Jung Yong-hwa and I know so much about each other, I think it would be impossible for us to establish a romantic connection,” Park remarked at the same press conference.

The primary actors in the play Coffee Prince are another beautiful duo onscreen. Yoon Eun Hye’s upbeat demeanour and Gong Yoo’s astute charisma complement each other like a well-balanced cup of coffee. Coffee Prince was a great sensation in Southeast Asia in 2007, with many fans believing that their favourite actor, Han Kyul, would be Eun Chan’s prince, not only in the drama world, but also in real life.

Even after the drama’s filming had through, it’s fascinating to see how outstanding these two are. When Eun Hye was asked to choose her ideal type from among her previous co-stars on SBS’s One Night of TV Entertainment, she chose Gong Yoo from among the other male actors (Lee Sun Gyun, Jung Yong Hwa, Lee Dong Gun, Yoo Seung Ho, Park Yoo Chun, and Kang Ji Hwan).

Who hasn’t heard of these well-known love couples from the 2004 drama Full House? Thanks to Hye Kyo’s character, who wrote a wonderful song about one happy small family of bears living together, everyone will remember the ‘Song Hye Kyo – Rain’ combination as the cute ‘Mama bear and Papa bear’ relationship. The two played the role of being a family under one roof, as the song says, although there are many problems and obstacles.

These two have never failed to make viewers laugh, weep, and feel love as one of the first love pairings to touch the hearts of countless K-drama fans. Many fans will be eternally grateful to them as they recall their lovely and amusing scenes while listening to the popular OST, ‘I Think I Love You.’ They won the Best Couple Award at the 2004 KBS Drama Awards for their fair love and war in this romantic comedy.

Boys Over Flowers, starring our lovely MinSun couple, is another fantastic K-drama. Lee Min Ho, who played the flamboyant Gu Jun Pyo, was attracted to Geum Jan-di at the end. The onscreen couple rose to fame thanks to their flawless portrayal of two young people with loving hearts despite their difficulties.

Ku Hye Sun, the leading actress, just married Ahn Jae Hyun, her attractive partner in the vampire drama series ‘Blood.’ Hye Sun recalled Min Ho from their early days in Boys Over Flowers during an interview last year, saying, “He [Ahn Jae Hyun] gave off a feeling that reminded me of Lee Min Ho when I first met him. It felt incredibly revitalising.” ‘Boys Over Flowers’ fans will be reminded of the love and joy that the MinSun couple previously brought onscreen thanks to this, even though our pretty Hye Sun has already married her boyfriend.

The Secret Garden, starring the exceedingly gorgeous Hyun Bin and the queen of Korean dramas, Ha Ji Won, is another great drama that has captured the hearts of many K-drama fans. Because of its honest, heartwarming, and compassionate tale, this drama has become a hit. And, of course, who can forget their on-screen passionate kiss, which makes us wonder if they’re dating in real life?

According to reports, the two became fast friends while filming the drama. In his spare time, Hyun Bin spends time with Ha Ji Won. In 2014, Ji Won stated that Hyun Bin is the closest of her actor buddies. She also has a hesitant smile on her face whenever she is asked about him. Hyun Bin admitted to sending a message to Ji Won when he was discharged from the military in 2013. “After I was discharged from the army, I texted Ha Ji Won,” he claimed. Their dating rumours have accelerated since this confession, and many Secret Garden fans are hoping that they will end up together.

5. Jin Goo and Kim Ji Won (Descendants of the Sun)

The ‘GooWon’ couple may not have been the focus of the 2016 popular drama Descendants of the Sun, but their complicated-yet-adorable love won over many viewers. Kim Ji Won, who played First Lieutenant Yoon Myung Joo, portrayed a fierce and brave character. Except for her one and only man, Seo Dae Young, no one else knows she has a sensitive heart (played by Jin Goo).

Their love is more mature than the Song-Song couple’s ‘love-at-first-sight romance,’ and the struggles they have to through just to establish their love is not a simple battle. Many admirers believe their connection is far more difficult than that of Yoo Si Jin and Kang Mo Yeon. Many fans say they are the best second-lead romantic couples in K-drama history as a result of this.

Despite the fact that ‘Running Man’ is a variety programme that has been airing since 2010, the Monday Couple has become popular among viewers due to their hilarious, comical, and sweet combination. They are the best on-screen duo that will make you laugh out loud.

The term “Monday Couple” was coined by HaHa because the two lovebirds are inseparable every Monday (the day of filming), and it has shown to be effective since, no matter how attractive the male guests are, Song Ji Hyo will always prefer Gary if it’s Monday. The couple had numerous challenges, including an apparent love triangle between HaHa and Song Joong Ki making Gary jealous in the opening episodes.

The ‘Lee Min Ho – Park Shin Hye’ partnership from the drama The Heirs is one of the most popular K-drama couples. Min Ho, who portrayed the rich, intelligent, and charismatic Kim Tan, as well as the innocent-looking Shin Hye, who played Cha Eun Sang, performed admirably in the drama. Their narrative follows two ordinary affluent and poor kids who, despite their class differences, fell in love. Fans of “The Heirs” couldn’t give up hope that the two would date in real life because of their chemistry.

Fans may have hoped that Kim Tan and Cha Eun Sang’s romance would continue in real life, but it’s pleasant to see that they’re good friends who admire each other’s acting abilities. Min Ho expressed his feelings on Shin Hye in an interview. “I think she’s a fantastic teammate, and [I] consider her a younger sister,” he remarked. Shin Hye, on the other hand, regarded Min Ho as a man with a strong personality. “Whenever we work together, we laugh around, and it makes filming comfortable and simple to continue,” she remarked.

2. Kim Soo Hyun and Jun Ji Hyun (My Love From the Star)

Because of their roles as the lead couple in the immensely successful 2013 series My Love From The Star, Kim Soo Hyun and Jun Ji Hyun have established themselves as one of the top couples in K-drama history.

The incredible connection between Do Min Joon and Cheon Song Yi, as well as the actor’s persuasive performance, has made viewers laugh and cry with each episode.

Who can forget the ’15 seconds to fall in love challenge,’ which culminated in a lovely kiss in episode 8? Or is it Do Min Joon’s tearful farewell to his Earth girl? They are, indeed, humorous, dramatic, and romantic, which drives the audience insane as they experience the surge of love.

The Song-Song duo is currently the most popular and hottest couple in Korea, following Song Joong Ki and Song Hye Kyo’s international recognition as the lead couple in the 2016 smash drama Descendants of the Sun. Who’d have guessed that Yoo Si Jin, a sweet-looking boy, is a tough soldier, and not just any soldier, but a Captain in the Special Forces? Song Joong Ki’s performance was so compelling that even non-K-drama fans will fall in love with him.

Also Read: 7 Best Companies To Work For In Israel In 2022

Who’d have guessed that the most gorgeous doctor is hiding within a terrifying emergency room? That’s Kang Mo Yeon’s pretty power: even when she’s wearing a mask and a doctor’s gown, Yoo Si Jin still thinks she’s the sexiest person in the hospital. They are currently one of the best couples in K-drama history, thanks to their flawless depictions.

Leave your thoughts in the comments section below and do let us know which from the above couples is your favourite.