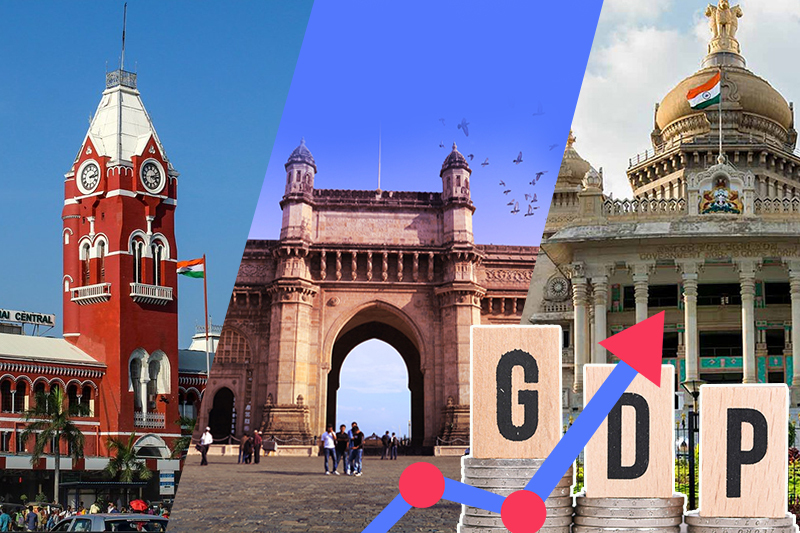 India is known for being one of the most developed countries on the planet and also has one of the economies that is developing at one of the quickest rates in the world.

During the course of the last century, India was home to a significant number of forward-thinking metropolitan settlements. As a result, today we will provide a list of the Top 10 Most Developed Cities in India, based on their contributions in terms of GDP to the overall economy of the nation.

India’s economic capital is Mumbai. It should not be a surprise that Mumbai is the most developed metropolitan area in all of India. It is the location of several important financial institutions in India, including the Reserve Bank of India, the Bombay Stock Exchange, the National Stock Exchange, and the Mint. It contributes $209 billion to the Gross Domestic Product, which is equivalent to 1,212,200 crore. It holds the 29th spot on the list of developed urban communities throughout the world.

Delhi is India’s second most developed city, with a gross domestic product that is equivalent to $167 billion (Rs. 968,600 crore). It possesses a big consumer market in addition to a considerable amount of FDI from other countries. Infrastructure, electricity, telecommunications, healthcare and social services, as well as real estate, are some of Delhi’s most important economic sectors. It is ranked 37th overall in the developed urban settlements category in the globe.

Kolkata is home to a diverse range of industries, including the steel and mining industries, the cement industry, the healthcare industry, the food processing industry, agriculture, the garment industry, and the jute industry. It is the most important commercial hub in both the East and North-East regions of India. The Calcutta Stock Exchange is located in the city of Calcutta (CSE). The Gross Domestic Product (GDP) that Kolkata contributes is around 870,000 crores, or $150 billion. The World Urbanization Prospects Database ranks Kolkata as the 42nd most developed city in the world.

The city of Bangalore has been called the “Silicon Valley of India.” It is the most important part of India’s IT industry. This city is home to the headquarters of a great number of companies and organizations, such as Infosys, Wipro, Hindustan Aeronautics Limited, and the Indian Space Research Organization (ISRO). Many people travel to Bangalore because it is known as a garden city and because the weather there is so pleasant. The city of Bengaluru has a gross domestic product (GDP) of 78 billion dollars (or 429,200 crores). It ranks as the 84th most developed city in the world.

With more than 13 different universities and business schools, Hyderabad is widely regarded as a leading global center for education. It is home to a wide variety of economic sectors, each of which makes a unique contribution to the expansion of the city. Two of the most significant industries in Hyderabad are the pharmaceutical and biotechnology industries. Pearl City is another name for it since it has the most special economic zones of any city in the world (SEZ). In Hyderabad, places like Genome Valley and other technological parks have gained a lot of notoriety. It is responsible for the employment of more than a third of India’s labor force. It has a positive impact on the economy of the world by the equivalent of $74 billion (Rs. 429,200 crore). It is India’s fifth most developed city and ranks 84th on the global list of most developed cities.

Services related to information technology and business process outsourcing are among Chennai’s most important exports. The city of Chennai’s economy is driven primarily by the automobile manufacturing sector. The production of textiles, apparel, and footwear, as well as technology and computers, the health care business, and the creation of hardware are all significant industries. Because there are so many flyovers in the area, it is commonly referred to as the “City of Flyovers.” It is one of the economies in India that is expanding at the quickest rate, and its GDP is $66 billion (Rs. 382,800 crore). On the list of the most developed cities in the world based on GDP, it comes in at position number 93.

This city is home to the headquarters of a large number of additional companies, including Nirma and Adani Group, amongst others. The production of textiles and garments, the manufacturing of automobiles, architecture, gardening, and parks are all significant economic activities in Ahmedabad. The city of Ahmedabad has improved its systems for transportable water and electricity. The gross domestic product (GDP) of the city is equal to Rs. 301,600 crore, which is equal to $52 billion. It holds the 105th spot on the list of most developed cities in the world.

Automobile manufacturing companies such as Tata Motors, Mercedes-Benz, Mahindra & Mahindra, Force Motors (Firodia-Group), and Kinetic Motors, as well as automotive component manufacturing companies such as Saint-Gobain Sekurit, TATA Autocomp Systems Limited, Robert Bosch GmbH, ZF Friedrichshafen AG, Visteon, and Continental Corporation, all have their headquarters in Pune. It has been a focal point for German companies throughout the course of the last 60 years, serving in this capacity continuously. The education sector, along with the glass, sugar, and forging sectors, are just some of the numerous successful businesses that can be found in this city. The city of Pune has a gross domestic product (GDP) of 48 billion dollars (or 278,400 crores). The United Nations ranks it as the 108th most developed city in the world.

The city of Surat has a strong reputation in the field of textiles. Due to the fact that it is the location of 92 percent of the world’s diamond production, Surat is also known as the diamond capital of India. Steel, petrochemicals, and jari are just few of the industries that help keep Surat’s economy humming along. Recently, Surat has gained a reputation for the diamond-studded golden jewelry and real estate that it produces. Forty percent of India’s artistic talent is produced in the city of Surat. In addition to this, the city is home to the highest concentration of embroidery machines in all of India. It is the ninth most developed city in India and ranks 115th on the list of the most developed cities in the world. The gross domestic product (GDP) of Surat is $40 billion, which is equivalent to Rs. 232,000 crore.

Industrialization has brought a number of heavy industries and steel mills to the city of Visakhapatnam, which is owned by the state government. It acts as a crossroads for the distribution of commodities such as iron ore, which are bought and sold by many different nations. Additionally, it is the location of a significant number of international financial institutions and technological corporations. It also boasts a robust economy based on fishing and real estate, both of which are experiencing continued growth. The city of Visakhapatnam has a lot of natural beauty to offer its visitors. It contributes $26 billion to the overall GDP, which is equivalent to Rs. 150,800 crore. It has been placed at number 133 on the list of the most developed cities in the world.