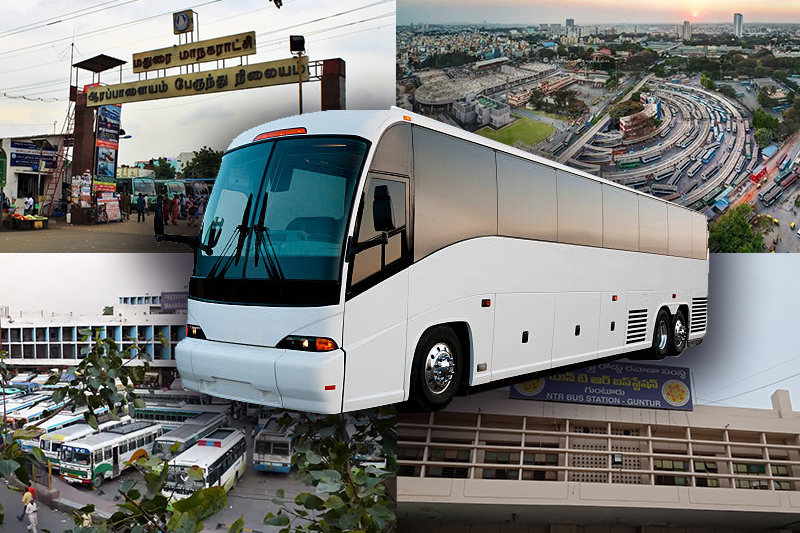 When traveling between cities or states, the majority of Indians still take buses—luckily they have access to literally the largest bus stand in India. Buses have an advantage over trains and planes in terms of accessibility from different parts of the city. Plus, people of all socioeconomic backgrounds like using the bus. Cheaper than train and plane tickets is a bus ride. Late-night bus travel is more popular than late-night air travel because of the convenience it provides passengers.

In recent years, bus travel in India has been modernized because of the government’s increased investment in the improvement of bus terminals and bus stations across the country. It’s not just private companies that are constantly updating their fleets; governmental agencies are always producing new buses, and most of the ones that travel great distances now have air conditioning. Therefore, it’s really no surprise that India houses the largest bus stand.

Below, we’ve compiled a list of the top 10 biggest bus stand in India:

The Vadodara bus station was officially opened by the Prime Minister of India, Narendra Modi, in the year 2014. The construction of the bus station, which is a building with five levels and cost close to 114 crores of rupees, was completed. Every day, the terminal sees 30,000 passengers and 800 buses making their way there. The commercial complex at the bus terminal is exceptionally spacious and has the potential to house up to 400 retail establishments. Up to this day, it still holds the title ‘India’s biggest bus stand.’

The Majestic Bus Station is another name for the Kempegowda bus station, which is located in Bangalore. The Majestic Bus Station is also known as the Kempegowda bus station. 1960 was the year that saw the inaugural opening of the bus terminal to the public. Since it is important to maintain everything, including the bus station, it is kept in good condition and has undergone a number of upgrades to ensure that it is up with current standards. It ranks second in the top 10 largest bus stands in Asia.

There are 160 platforms at the Chennai Mofussil Bus Terminus, the largest bus stand in Asia, in Chennai. CMDA is in charge of both the governance and maintenance of the bus terminal. The fact that the path leading to the bus station connects to the Chennai Metro, which makes the lives of the people who live here more simpler, is an additional advantage of the bus station. The Chennai Mofussil Bus Terminus was a project undertaken by the government in the year 2002. Still it remains in the top 10 biggest bus stands in Asia.

The ISBT Delhi bus terminal in India is the country’s largest bus station in terms of total area and connects seven different states to the capital city of Delhi. The information gathered from the sources indicates that on a daily basis, the bus terminal serves 66 buses. Additionally, it links up 1800 buses each and every day. The bus terminal is conveniently connected to the metro, and one of the interesting things about this bus station is that there is a bus that travels to Pakistan from here once per week.

In terms of the amount of space it occupies, the Mahatma Gandhi Bus Terminal in Hyderabad is the third largest bus station in all of India. The bus terminal is also known by its alternative name, the Imlibun Bus Station. There are one hundred fifty platforms in the bus station. Telangana State Road Transport Corporation is currently responsible for the governance as well as the maintenance of the Mahatma Gandhi Bus Station. The accounts claim that the bus station first opened its doors during the reign of the Nizam, and that it subsequently underwent expansion and improvement.

Andhra Pradesh State Road Transport Corporation is in charge of the Pandit Nehru Bus Station, which can be found in Vijayawada and is named after the country’s first prime minister. Telugu Satavahana Prayana Pranganam was the name of the bus station in the past, but it was changed by the authorities so that it more accurately reflects the station’s function.

The NTR bus station can be found in Guntur, which is located in Andhra Pradesh. The passenger who wishes to travel within the city as well as those who are eager to travel outside of the city are both accommodated at the bus terminal. The Andhra Pradesh State Road Transport Corporation did a good job of building the bus station, and they continue to do a good job of maintaining it even today. This terminal serves as a connection to a large number of routes, and the station itself has 52 different platforms, so passengers may quickly board buses bound for any route.

Also Read: Top 10 Most Developed Cities In India By GDP Contribution in 2023 (Updated)

Hassan is home to the KSRTC bus station that serves the area. This bus station was restored and reopened in 2010 as a result of the requirement that frequent renovations and adjustments be implemented. The station is said to have the capacity to house approximately 250 buses, according to the sources. The construction of bus stands cost the government more than 34 crores in total expenditures.

The Arappalayam Bus Terminus in Madurai, which is located in the Indian state of Tamil Nadu, is regarded as being one of the most important terminals and the 7th most biggest bus stand in India. The reason for its significance is that this terminal is on the path that will take you to major towns such as Coimbatore, Tripura, and Dindigul. This is the driving force for its significance. It is an older bus station that was built by the government. This bus also provides other services and amenities, such as a medical dispensary, a florist, parking for two-wheelers, and dining options.

Everyone is well aware of the fact that Delhi is a state with a heavy population, and we all are also aware of the fact that a heavy population signifies the fact that every day a tremendous amount of people move in and out of Delhi. In that region, the roadways, trains, and airways are all operating at or near capacity. A new terminal was built in the Anand Vihar by the government so that residents of the area might benefit from improved transportation and other types of infrastructure.

These are the top 10 biggest bus stands in India, please let us know if you have any weird experiences at the bus station.

Also Read: Top 10 Most Dangerous Cities in California in 2023