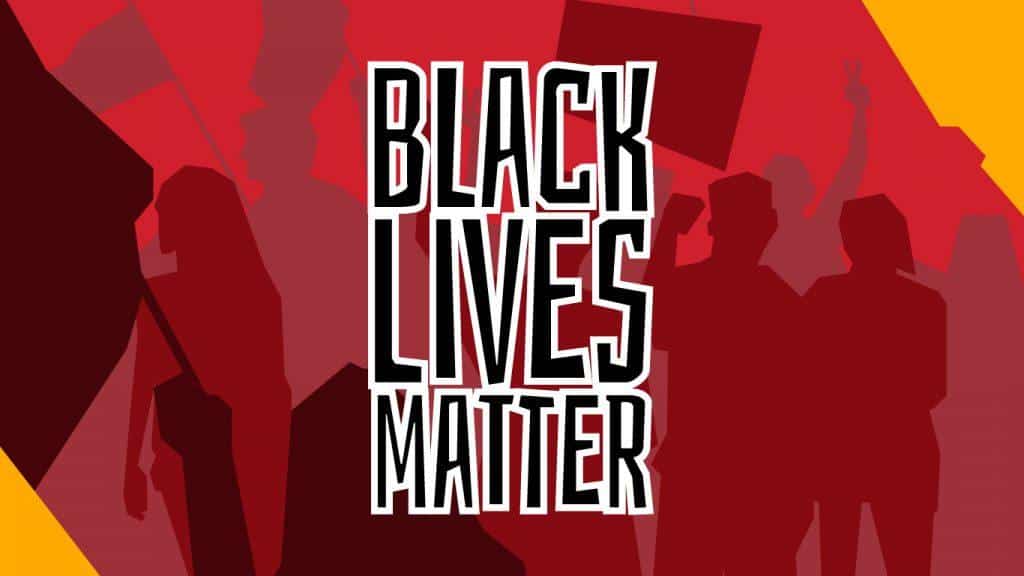 The African American citizen George Floyd was a previous offender and criminal. But the brutality of his death has shaken up America and many other nations alike. The 46 years old African American lost his life to police brutality, something which was filmed and viewed millions of times on various social media handles.

A multitude of civilians already harried due to corona virus scares and loss of jobs is angry, mobbing city bounds across the globe, shouting out for justice against racial discrimination. Previous instances of similar cases have also found mention in the mass protests that have rocked the world intrepidly over the weekend.

The world has not recovered from the uncertainty of survival to the Corona Virus. Yet people have busied themselves mimicking the death of Floyd by lying on the floor face down showing their solidarity. Floyd was pushed to the ground for almost nine minutes before he went unconscious and was later declared dead.

Photo and video grabs show people thronging streets and prominent city centres and historical hotspots. Some have gone ahead and defaced public property and given rather violent outcome to peaceful protests. Media sources are confirming the play of miscreants that are taking advantage of the sentiments of the masses.

The protests have stretched to Tokyo, Berlin, Spain, UK, Denmark, and Hungry not to forget the epicenter of the eruption- America itself. All four officers present at the time of his arrests, have been charged- one with second degree murder as well.

But what has blown the protests out of proportions is a blatant use of social media and a whole lot of misinformation that has done rounds on various channels. The social media has given the common man power; and sometimes too much of it as well. The crime was committed, recorded and therefore cannot be ignored. It might have had racial implications behind the police brutality. But the wave of misinformation that has come with it, is becoming difficult to handle for city administrations and police personnel across the globe.

According to Euronews, there has been a lot of misinformation doing rounds on the social media. Old clips are being posted and circulated. Most of them are isolated cases of assault that occurred anytime between the years 2014-2020, has been implicate to George Floyd’s death and is now (wrongly) building up hatred for police personnel in America.

The correspondents from major dailies in America and the UK have admitted that visual investigation has never been as important as it has become today, owing to the fact that a lot of misinformation could have lead to other catastrophic outcomes, had there not been visual evidence to substantiate what actually happened with George Floyd.

With the slogan ‘Black Lives Matter’ the globe is resonating and shouting against racial discrimination at every level, which includes various such instances of the past where Asians being subjugated in Australia as well. They might not hold relevance here right now but will only add more fuel to this uncontrollable fire.

George Floyd lost his life under the knee of a Minneapolis police man who pinned him down ,handcuffed as Floyd begged for him to free his neck, as he said ‘I can’t breathe’ for almost 16 times.

Similar demonstrations have been seen in Toronto itself. The same has seen solidarity from the prime minister who himself is said to have kneeled on one knee with his mask on to show solidarity amongst Americans and unity for all.

In Paris, several thousand demonstrators ignored a protest ban — issued due to the coronavirus pandemic — and assembled within sight of the U.S. Embassy, kept back by imposing barriers and riot police. An estimated 15,000 people gathered in the heart of Manchester, England, while 2,000 people joined in a demonstration in the Welsh capital of Cardiff.

The mass protests are a breeding ground for easy corona virus contractions and can push the various countries into second and third waves of infections again. Political analysts are right in fearing this. 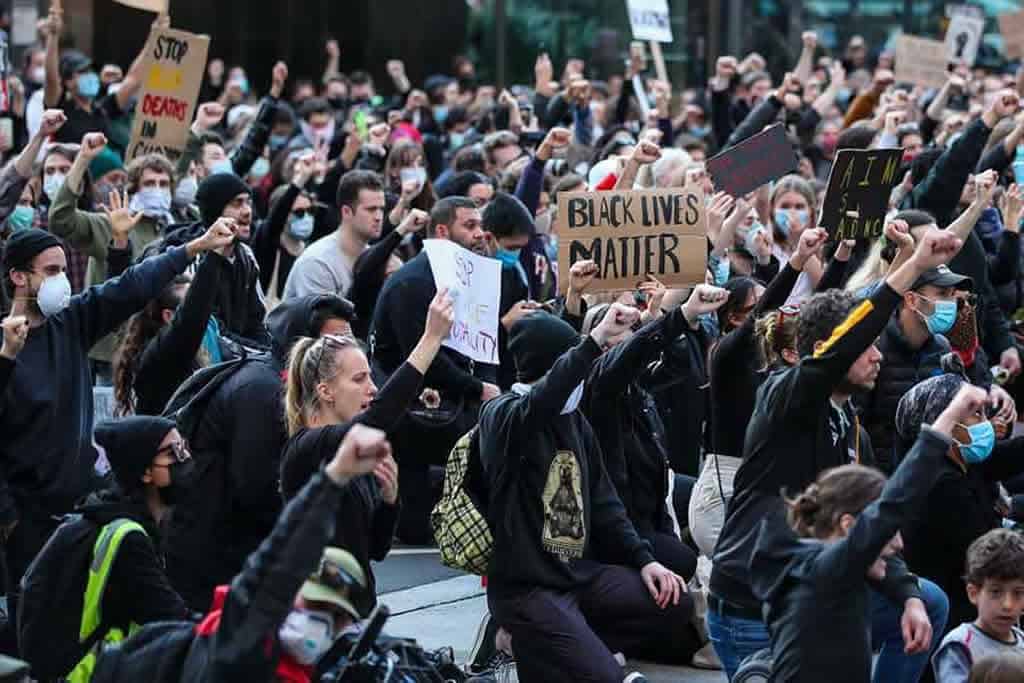 Supporting “Black lives matter” thousands of people have been protesting in Australia, inspired by the death of George Floyd in police custody in Minneapolis, U.S. last week.

Rallies in Australia are also about the long going mistreatment and marginalization of Australian Aboriginal people. Protestors in Sydney were ready to resist an order but it was overturned by a court appeal at the last moment. The New South Wales Supreme Court ruled against the protest holding on Friday under the social distancing rules in place due to coronavirus.

The mass protests are being seen in Melbourne, Brisbane, Hobart, Adelaide and many other Australian cities.

New South Wales Police Minister David Elliott said regarding the protest cancellation in Sydney, “Freedom of speech isn’t as free as we would like it to be at the moment. Rules at the moment are clear.”

Why is Australia protesting? Not just in solidarity, enough indigenous deaths.

To some it may feel Australia is protesting just in solidarity. But it is actually seizing in the US protests, because Australia too has a history of lot many indigenous deaths, and people have had enough.

According to Committee to Defend Black Rights in 1987, one indigenous person in Australia was dying in custody every 11 days. This led to a royal commission investigate into this, finally pronouncing in 1991 the widespread incarceration of Aboriginal people and provided the circumstances around 99 deaths. Apart from further recommendations, nothing much was done in this relation, leading to massive uproar and disapproval in people against the government. The Guardian reports that since the report in 1991 almost 432 indigenous Australians have died while in custody.

Protests have been long going at various episodes against the death of indigenous Australians, asking for action against the police officers responsible. But the lack of government’s actions in the required direction have led the fury rise.

The recent protests in US post George Floyd’s death in police custody has infuriated the people like never before. The mass protests are spreading across nations and Australia is witnessing massive rallies in support of the targeted communities. 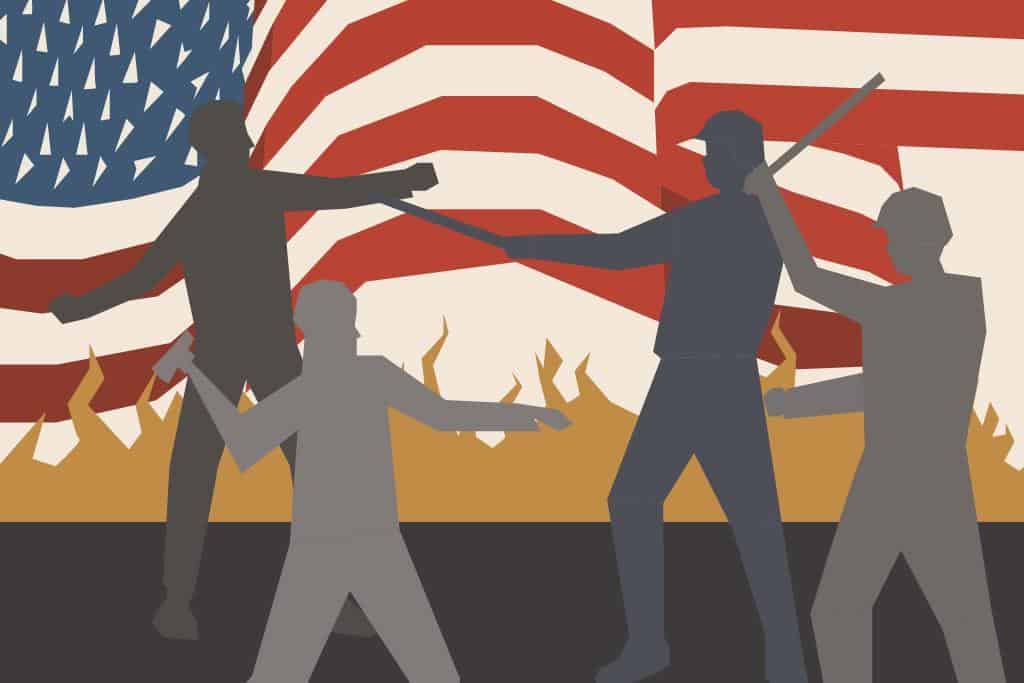 On the third night of protests after death of George Floyd, 46 in police custody, the protesters set ablaze a police station in Minneapolis.

The protests unfolded across U.S. cities after a harrowing video recorded in Minneapolis was released showing a police officer kneeling on the neck of resident George Floyd, even when he kept saying “I can’t breathe”, leading to his death.

This incident sparked anger among U.S. citizens lending them on streets protesting against racism and brutality by police against African-Americans.

Mr. Floyd’s family is demanding for implication of accused police officers over murder charges. However, prosecutors are said to be still gathering evidence.

On Friday morning a CNN journalist, Omar Jimenez was arrested with his camera crew at the site of protests by police in Minneapolis for not “moving from the site”. This has further added fuel to the long criticized unlawful and inhuman conducts by police officials in the U.S. Some have also called it as “suppression of media.” The team was released 1 hour later, post Minneapolis governor’s apology for arrest.

Minneapolis police department’s third precinct, the epicenter of the Floyd incident was mustered by protesters on Thursday. The police, in an attempt to disperse the crowd, fired tear gas and rubber bullets. But the area was soon breached by crowd and set on fire along with 2 more nearby buildings.

Minneapolis mayor Jacob Frey called the protests “unacceptable” but acknowledged that there is a “lot of pain and anger”.

President Trump criticized the Minneapolis mayor for “lack of leadership”. He also said that National Guard would be sent to fix the situation.

President Trump tweeted, “These THUGS are dishonoring the memory of George Floyd, and I won’t let that happen. Just spoke to Governor Tim Walz and told him that the Military is with him all the way. Any difficulty and we will assume control but, when the looting starts, the shooting starts.”

This has sparked the anger even more as it seems that President is “glorifying the violence”. Twitter has too mentioned the tweet to be violating the rules of social media platform.

The protests against violence and racism against black Americans has extended to various cities of U.S. including Denver, Colorado and Columbus in Ohio with mass rallies being carried out.

What happened to George Floyd – the incident unfolding!

On Monday, responding to reports of counterfeit money use, the police officers approached Mr. Floyd who was in his car. The police officers involved say that when he was asked to step away from the car, he resisted and was then handcuffed.

However, the video released shows otherwise, where a police officer is seen pinning him down with his knee on Floyd’s neck. Mr. Floyd in the video can be clearly heard saying “Please, I can’t breathe”, “don’t kill me.”

In the latest development, Derek Chauvin, who is seen kneeling on Mr. Floyd’s neck has been arrested with murder charges.

The country-wide unrest following a long history of violence against black Americans by police officers has taken a violent note and is worrying.