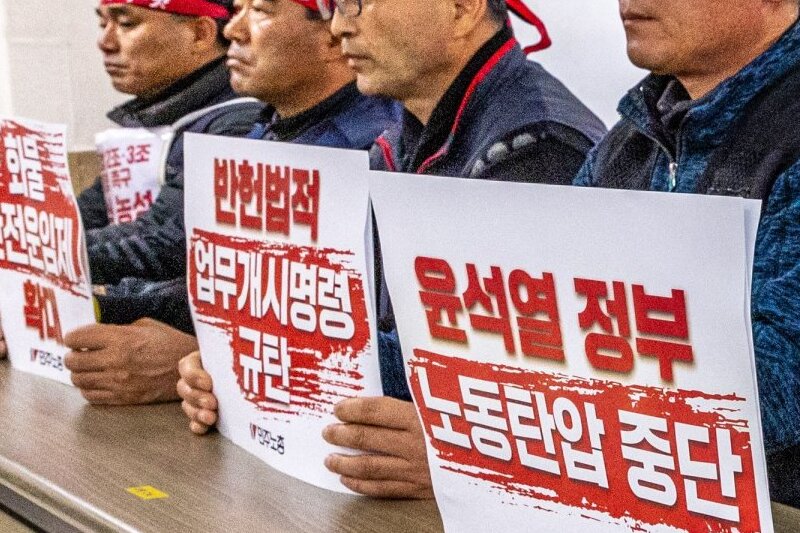 Amidst a protracted truckers’ strike, South Korean President Yoon Suk-yeol on December 4 authorized preparations for expanding a back-to-work order beyond the cement industry.

Thousands of South Korean truckers have been on strike for almost ten days, with negotiators for the government and unions unable to resolve issues on minimum pay regulations.

Yoon demanded on Sunday that government ministers prepare to issue a return-to-work order in sectors like as oil refining and steelmaking, where additional damage is anticipated, according to a statement from Yoon’s spokesperson, Lee Jae-myeung.

Yoon demanded that individuals who violated the law during the strike be punished, and he instructed ministers to take steps to mitigate the harm, such as utilizing alternative drivers, military personnel, and military equipment.

Tuesday’s countrywide strike is being planned by the Korean Confederation of Trade Unions, an umbrella organisation.

According to Lee, Yoon stated, “I cannot help but view this planned strike as a politically driven move rather than one intended to promote workers’ rights,” signaling a likely strong response from the government.

“Holding the people’s living standards and national economy hostage in this time of economic crisis makes it more difficult for weak, unorganized employees to survive and deprives future generations and the general public of their future employment opportunities,” Yoon added.

The strikes have damaged South Korea’s supply chain, resulting in 1.6 trillion won ($1.2 billion) in lost shipments in the first week, according to Thursday’s statement from the industry ministry.

The government has stated that a minimum pay scheme for truckers will not be extended beyond the next three years. According to the union, it should be permanent and broader in scope.

On Saturday, tens of thousands demonstrated in downtown Seoul in favor of the truckers’ demands.