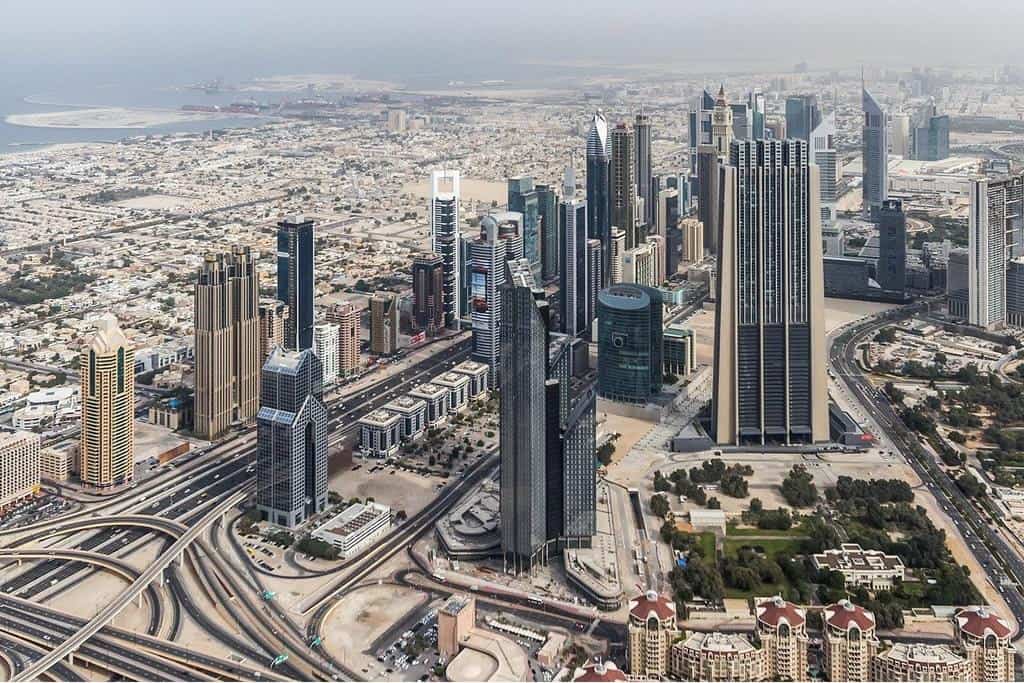 Positive signs for a rapid economic recovery in the UAE

With a dramatic fall in the price of oil and the global economy slowing down, Gulf countries find themselves in a crunch.Plunging oil prices and the deepening fallout from the coronavirus pandemic is a double blow to Gulf governments as they seek to protect their energy-dependent economies.Although the UAE is still heavily exposed to fluctuations in the oil market, its economy is expected to come back stronger and faster than other economies. That’s because the UAE is the most diversified economy in the Gulf with the non-oil sector accounting for more than 71 percent of GDP.

The Central Bank of the UAE, CBUAE, has projected the recovery of economic activity to commence in the second half of the year.The first quarter economic activities witnessed mixed movements, with the UAE economy performing well during the first two months of 2020. In the Quarterly Economic Review 2020, the Targeted Economic Support Scheme, TESS, by the CBUAE and the economic stimulus packages announced by both local and federal governments are likely to weigh in positively on the PMI, real estate prices, employment and credit growth with a positive impact on the overall sentiment.In line with the agreement by OPEC+, the UAE average oil production is projected at 2.984 million barrels per day in 2020.

From mid-March, the UAE Central Bank also moved to protect the economy, buffering banks and businesses with an economic support scheme worth around 65 billion euros. This took the form of collateralized loans to banks at zero cost in order to encourage lending. And freeing up cash from ‘capital buffers’ which are the banks’ mandatory rainy-day funds.According to a recent survey of financial lenders, these support measures have instilled considerable confidence. 42% of respondents in the UAE said they believed their companies could go back to ‘Business as usual’ within 3-6 months.Similarly, 64% of respondents here were ‘very confident’ in their company’s ability to build skills for the future compared with just 48% globally.

The UAE will remain politically stable in 2020-24, despite regional tensions centred on Iran, “The economist Intelligence Unit” says. Despite extensive stimulus measures, the economy will contract in 2020, given slumping oil prices and output and the impact of the coronavirus. Economic diversification and a strong business environment will remain policy priorities but oil will remain central to the economy.The rating agency Moody’s in the UAE warned last month that the negative growth and fiscal implications can be most acute in Dubai, while it faces the greater risk of its government-related entities requiring financial support as a result of the deterioration in economic conditions.

In the light of these considerations, a multi-nation group of business councils and chambers based in Abu Dhabi and Dubai have joined forces to engage with the UAE government and work collectively to ensure business continuity in the country.The Multi-nation Business Continuity Task Force will provide a channel of communication for members, gauge sentiment, assess business continuity challenges and support the wider business community on specifics that require the UAE government assistance.Since the beginning of the COVID-19 pandemic, the authorities in the UAE have rushed to contain the outbreak by closely monitoring and proactively testing and enforcing self-quarantine.

Now, businesses are returning to more normal operations, and UAE government continue supporting a robust business environment for those operating throughout the country. Comprising 25 diverse business councils and representing over 6,500 companies, the joint task force may be leveraged by the UAE government to secure clear, concise feedback from business and industry. The joint task force is one of many initiatives launched by the government to help the business sector keep going, enhanced liquidity and reduced the impact of the current global economic situation. This is clearly manifested in the growing number of customs transactions handled by Dubai Customs in the first five months of this year.

The Statistics Centre – Abu Dhabi (SCAD), a government entity under the Department of Government Support (DGS), published on May the Statistical Yearbook of Abu Dhabi 2020.The handbook confirms that, despite the importance of oil to the economy of Abu Dhabi, the Emirate pursues an ambitious strategy that seeks to expand and diversify the economy in order to fortify it against volatile oil prices. In this regard, it can be seen from the figures announced by SCAD, that oil accounted for only 40.8% of Abu Dhabi’s GDP in 2019, despite the rise observed in oil prices during the same year. This attests to the successful progress of the Emirate’s plans to expand the economic base and diversify the sources of income.The Abu Dhabi government is committed to facilitating business activities in various sectors, while building a diversified and resilient economy that is aligned with the global economy and appealing to foreign investments. A total of 18,452 new business licenses were issued in 2019.

Over the past decades, the number of agricultural holdings has increased 38-fold, from 634 in 1971 to 24,018 in 2019, while the area of agricultural land has increased 33 times from 22,377 donums to 749,868 donums. The area cultivated with fruit trees made up 36% total area of plant holdings in 2019, followed by field crops at 5%, and vegetable crops at 3%.The Statistical Yearbook includes data on commercial farms specialised in the production of poultry, eggs and cow milk in Abu Dhabi, which supply the emirate’s market with a substantial quantity of food. Poultry production reached 22,408 tons, the layers farms produced 529.7 million eggs, and dairy farms produced 136,900 tons of cow’s milk in 2018.

To meet the country’s freshwater needs, the government is increasingly turning to energy-intensive desalination methods. Another challenge is that less than 1% of the UAE’s land is arable, according to the World Bank. The focus ison finding ways to farm with fewer resources – which is where technology and experimenting with new crops can help, said Sajid Maqsood, associate professor in theCollege of Food and Agriculture at United Arab Emirates University.In recent years, the UAE has seen a rise in the number of vertical farms, in which cropsare grown stacked under LED lighting and watered with mists or drip systems.In general, the Emirates continue to invest in science and technology, establishing itself as one of the most advanced countries in the world. The Gulf State is also learning and changing strategies for supply chain management.

In collaboration with the Centre for the Fourth Industrial Revolution UAE and the Dubai Future Foundation, DFF, the World Economic Forum has released a comprehensive blockchain toolkit to offer businesses and organisations new, industry-tested solutions to the urgent issues hindering global supply chains, which have been exposed by the COVID-19 pandemic.The Redesigning Trust toolkit provides tools, resources, industry insights and best practices for organisations seeking ways to improve traceability, visibility, accountability and end-to-end, real-time communication.The toolkit has been developed following a deep analysis of projects and use cases of more than 100 blockchain stakeholders from over 60 public- and private-sector entities across the world focused on supply chain logistics, including prominent work and feedback from the DFF and World Economic Forum Centre for the Fourth Industrial Revolution UAE.

If it is true that some sections of the Emirati economy are suffering from the current global crisis, such as tourism due to the prolonged lock-down, other positive signs demonstrate the country’s economic solidity.Sectors that were already on the edge of trending started to boom. Online sales are on the rise.Residential projects in UAE also continue momentum in first half of 2020. The UAE adopted a comprehensive national strategy for developing the housing sector, to serve citizens and maintain stability and prosperity. The Follow-Up Committee of the Initiatives of the UAE President has completed the construction of the AED1.9 billion Mohamed bin Zayed Residential City in the Emirate of Fujairah.

On a federal level, the Sheikh Zayed Housing Programme is monitoring the implementation of many projects and programmes that aim to provide suitable housing for various segments of the community, by offering housing grants and loans for the construction, completion and maintenance of houses.The UAE leadership is givingconfidence and support that the economy will recover faster to community and foreign investors. This positive attitude encourages purchases and investments, avoiding panic.

Airlines around the world are facing increasing pressure and unprecedented challenges as a direct result of the COVID-19 pandemic. In March, the IATA called for emergency support from governments in order for airlines. The UAE’s flagship airline, Emirates, has said that the international airline industry is unlikely to recover for the next 18 months with the airliner likely to need extended state supportand Dubai has stepped up to respond.In a tweet, Hamdan bin Mohammed bin Rashid Al Maktoum, Crown Prince of Dubai and Chairman of Dubai Executive Council,stated the Government of Dubai’s renewed commitment in supporting the success story of Emirates, acknowledging that this was a critical time for the airline.

As a shareholder of Emirates, the Government of Dubai injected equity into the company, considering its strategic importance to the Dubai and the UAE economy.Domestic demand in the UAE will not be able to recover fully until overseas demand starts normalising. Various sectors of the UAE economy like trade, tourism, real estate, leisure, hospitality and domestic manufacturing rely heavily on inbound and outbound flows.UAE has a strategic vision to promote openness and cooperation with the global economy and strengthen its bilateral trade and investment with other countries.This will allow the Gulf country to stage a faster recovery to pre-COVID-19 levelsin the mid to latter part of 2021.

US: Latinos worst-hit by COVID-19, health officials alarm concerns
US letter to European governments: War on the web tax