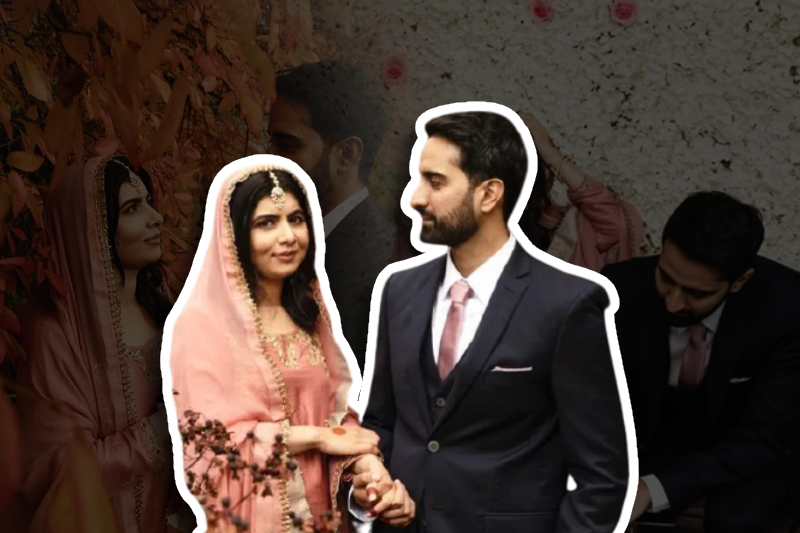 Birmingham -At 17, in year 2014, she became the youngest-ever Nobel Peace Prize winner. And now at 24, Pakistani activist for female education has married Asser Malik in an intimate nikah ceremony in Birmingham, England on Tuesday. Young Malala Yousafzai, popularly just known as ‘Malala’, has come a long way after assassination attempt in 2012 when she was shot in head by Tehrik-e-Taliban Pakistan (TTP) for going to school, a right that was banned for girls by the terrorist organization.

Malala announced the news of her nikah on Twitter as congratulatory wishes came pouring in. “Please send us your prayers. We are excited to walk together for the journey ahead,” Yousafzai tweeted sharing pictures of the couple from ceremony. Priyanka Chopra and Greta Thunberg were among those who wished the couple on Instagram. Justin Trudeau, the Prime Minister of Canada, joined by his wife wished the couple on their “special day”. He tweeted, “We’re wishing you a lifetime of happiness together.”

Her husband, Asser Malik, is a general manager for Pakistan Cricket Board, according to his LinkedIn page. He has graduated from Pakistan’s Lahore University of Management Sciences in 2012.

China has imposed heavy tariffs on Australian wine, barley, and meat this year

Pollution Analysis: Fossil fuels use led to an unprecedented number of deaths in 2018

Nine years have passed when Malala was fatally shot in head by Taliban for blaring open and criticizing the organization’s attempts to prevent Pakistani girls from attaining education. At that time she was writing blog posts for BBC about ‘life under the Taliban in the Swat Valley of Pakistan’. She was transferred to UK for medical treatment. She settled in Birmingham in 2013 with her father, educational activist Ziauddin Yousafzai, and family. She was later granted asylum in the UK where she continued her education, became an activist and founded Malala Fund organization that works for girls’ education. Last year she graduated from the prestigious Oxford University in Philosophy, Politics and Economics.

In 2012, Malala received Pakistan’s first National Youth Peace Prize and in 2013 she received Sakharov Prize. The same year she co-authored the international best seller ‘I AM Malala’. On July 12, 2013, day of her 16th birthday, Malala spoke at the UN advocating for global access to education for all. The event was dubbed by UN as “Malala Day”.