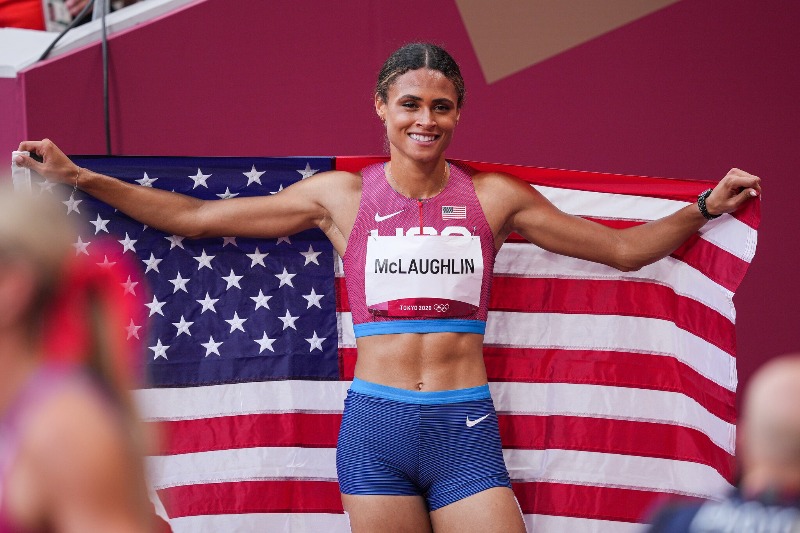 mclaughlin breaks the world record for the 400m hurdles

McLaughlin breaks the world record for the 400m hurdles

For the fourth time in the past 13 months, Sydney McLaughlin has broken the world record for the 400-meter hurdles. With a time of 50.68 seconds, she won the event at the World Championships for the first time, thereby completing her collection of gold medals.

Her previous record, which stood at 51.14, was completely destroyed by this performance.

She shared this information with Lewis Johnson of NBC Sports, saying, “We believed we’d be able to run a little bit quicker than 50.68.” “But we are quite thankful for that amount of time. We considered it a victory if our score was lower than 51.

She has cut the world record down from 52.16 seconds to 50.68 seconds since June 2021. She is nine tenths of a second faster than the lady from her own nation, Dalilah Muhammad, who holds the record for the second-fastest time ever run by a woman and who finished in third place behind the Dutchwoman Femke Bol on Friday in Eugene, Oregon.

McLaughlin, who is only 22 years old, recently became the second-youngest track and field athlete in the annals of the sport’s history to win the three most prestigious trophies in a single individual event: the Olympic gold medal, the world title, and the world record. Kenenisa Bekele, an Ethiopian distance runner, was the only one to hold all three titles at a younger age.

By a couple of days, McLaughlin overtook Usain Bolt as the second-youngest person to ever finish all three events in the triple crown.

McLaughlin also matched Edwin Moses’ accomplishment of breaking the world record for the 400-meter hurdles four times during the course of his career, despite the fact that Moses did so over a period of seven years.

What does the future hold for McLaughlin? If the United States team makes it into the finals of the women’s 4×400-meter relay on Sunday and she wants to compete again, she will most likely get a berth in the final.