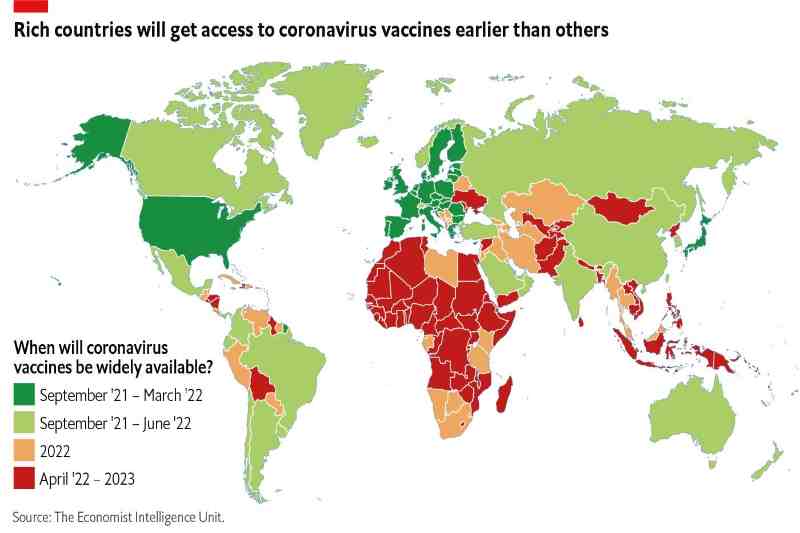 Geopolitics and COVID-19, a map of the coronavirus vaccine

If Asia, Africa, and South America are the winning ground for Chinese and Russian vaccines, the Northern countries of the world, Europe and the United States in the lead, but also Japan and South Korea, have chosen to focus on vaccines produced by Pfizer and BioNTech and by Moderna. Except for India, which instead has chosen to focus on the vaccine developed in Oxford by AstraZeneca. There is an evident correlation between many Governments’ geopolitical and diplomatic relations and the anti-Covid vaccines’ distribution map. To realize that, it’s enough to look at where the different vaccines are currently available and authorized.

The vaccine produced by the American multinational Pfizer and developed by the German company BioNtech was currently authorized for emergency use in the United States, the United Kingdom, the European Union, Switzerland, Israel, Canada, Mexico, and is now also awaits the green light from South Korea and Japan. On March 17, 2020, Pfizer and BioNtech concluded an agreement providing for the development of the vaccine and its distribution throughout the world except China, where BioNtech has already entered into an ad hoc agreement with Fosun Pharma.

The same countries that approved Pfizer/BioNTech’s vaccine also authorized the vaccine developed by the American startup Moderna in collaboration with the American National Institute of Health, which, in turn, signed an agreement with the Swiss multinational Lonza for the worldwide production and distribution of the vaccine. The green light for the two vaccines in these countries was also facilitated by a special agreement that binds the authorities, called to authorize the distribution of drugs in their respective countries, and which involves the European Medicines Agency (EMA) and the Canadian, Swiss, and Japanese ones. Those allowed the managers of these agencies to participate in the European authorization process and, therefore, to share the collected data.

Despite this agreement, it will not be possible to launch a vaccination campaign before May in Japan due to national laws requiring nationwide testing of the vaccine before it can be authorized. The high costs and limits in the production of vaccines that are slowing distribution even in countries that have already booked several million doses such as the European Union and Canada with the Pfizer/BioNtech vaccine, are also an obstacle to the adoption of these vaccines in other countries of the world, especially the very populous and less rich ones such as India and the African ones. It is precisely these countries that are looking with the greatest interest at the other vaccines available.

For example, India started a nationwide trial of the vaccine, produced by the Anglo-Swedish multinational AstraZeneca and developed by the Jenner Institute of Oxford (UK).   The Serum Institute, one of the largest vaccine manufacturers worldwide, will produce it on-site. For Pfizer / Biotech and Moderna vaccines, the Indian market could remain closed, even if, in recent weeks, the relations between Moderna and Hyderabad Indian Immunological Limited (IIL) of Hyderabad have intensified for the local production of the American vaccine.

That would allow a considerable reduction in costs, and the leverage of the low price has also prompted Jair Bolsonaro’s Brazil to look for the vaccine produced in India. It is not a coincidence that AstraZeneca’s vaccine is one of the two vaccines authorized for emergency use in India, together with the one produced by the Indian pharmaceutical company Bharat Biotech. India is the only country, after the United Kingdom, to have authorized the distribution of this vaccine. The vaccine will have a low cost, and AstraZeneca has stated that as long as the epidemic continues, it will not impose the charges deriving from the exploitation of copyright, or patent costs, on the vaccine’s final price.

The same goes for the Russian Sputnik V vaccine, which was first authorized in Russia in August, and which was then gradually adopted by countries that have a direct relationship with Moscow: Belarus, Serbia, Argentina, Bolivia, Algeria, Palestine, Venezuela, Paraguay, and Turkmenistan.

However, it was China to use vaccines as a geopolitical offensive tool. Xi Jinping has exploited the Chinese biotech power (4 of the 12 vaccines currently authorized are of Chinese production) to consolidate relations with countries along the Silk Road and in the American continent, from Brazil to south-eastern Asia. Not to mention Africa, where China is implementing a real vaccine distribution infrastructure, several countries have now started concrete collaboration with the Beijing government on this front and have also signed important political agreements.

For example, Ethiopia which will host one of the Chinese vaccine production sites just outside Addis Ababa, or Egypt and Morocco which, together with Brazil and Chile, the United Arab Emirates, and Saudi Arabia, hosted a series of trials that have allowed to evaluate the effectiveness of different vaccines produced by Chinese pharmaceutical companies. Once the trials are completed, these countries are now in the front row to receive the vaccines necessary for their respective vaccination campaigns.