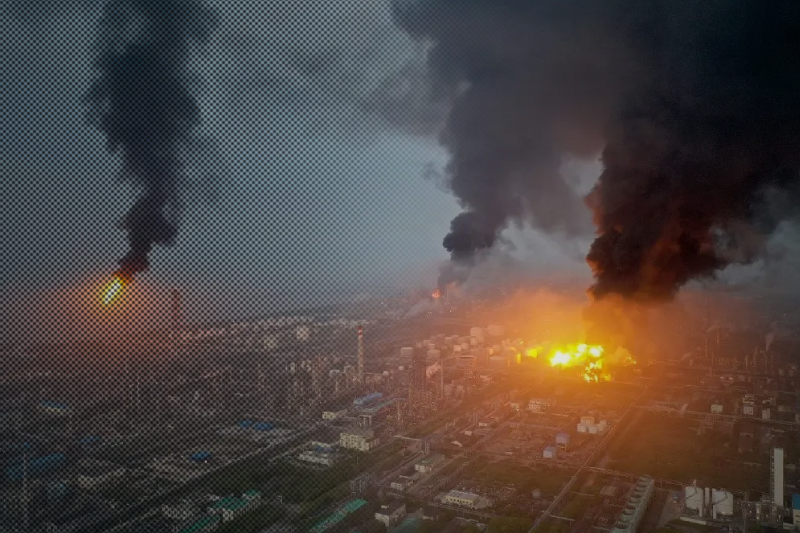 fire and smoke rage through the shanghai chemical plant

Fire and smoke rage through the Shanghai chemical plant

The fire at Shanghai’s Sinopec Shanghai Petrochemical Co plant in outlying Jinshan district had erupted around 4am. It was later brought under control by morning, as reported by the state news agency Xinhua. The fire has reportedly killed at least one person.

“The fire at the scene has been effectively brought under control and protective burning is currently being carried out,” Xinhua said. “According to our initial understanding, the fire has already caused one death,” it added.

Cause of fire at the chemical plant

The factory that caught fire is of ethylene glycol. But the reason of fire hasn’t been cleared yet. Sinopec, the state-owned company that is in charge of the operations of the plant located in the suburb of Jinshan, said that driver of a transport vehicle had been killed and a company employee has been reportedly injured.

Footage circulating of the fire at a petrochemical plant in #China is eerie end-of-the-world stuff. It’s now been brought under control but at least one death. It started in #Shanghai area at 4am today. Gotta be pretty toxic air too. pic.twitter.com/ubrdJNqgsm

Drone footage making rounds on the social media shows the sky above Shanghai, which is the most populous city of China, is turning black from smoke. In one aerial video on social media, three fires could be seen blazing in separate buildings. “At the petrochemical plant, an early morning explosion was heard by residents as far as 6km (four miles) away,” according to local media.

Sinopec has underlined that it was monitoring for any environmental impact due to the fire and that no damage to the surrounding environment of water bodies had been recorded.

The Shanghai fire department said on Weibo that over 500 personnel had been dispatched immediately after the fire broke out around 4.28am. “The ministry of emergency management has dispatched an expert group to the scene,” CCTV reported.

Shanghai has been under strict lockdown due to the Covid-19 pandemic for two months and had just started to resume its businesses.