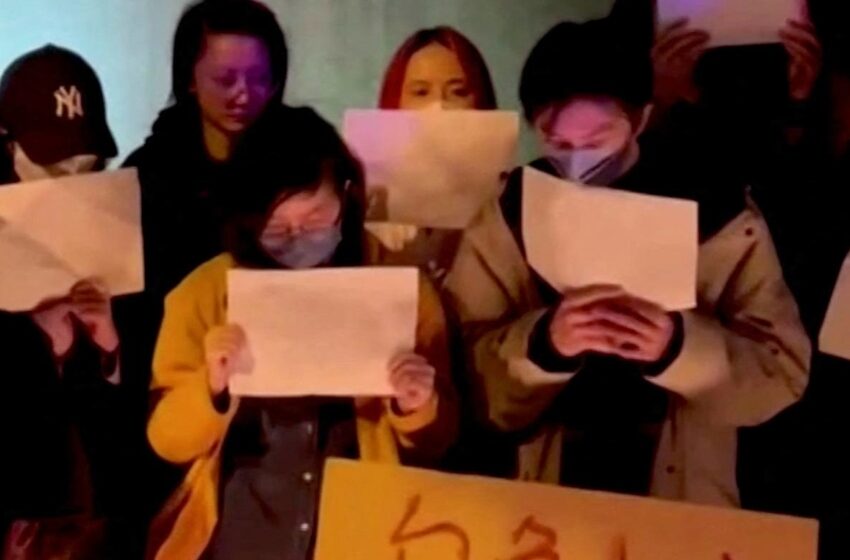 Early on November 27, over three years into the pandemic, protests against China’s strict COVID-19 restrictions moved to further cities, including the financial capital Shanghai, with a new wave of fury spurred by a deadly fire in the country’s far west.

The fire that killed ten people in a high-rise building in Urumqi, the capital of the Xinjiang region, on Thursday has sparked widespread public outrage, with many internet users speculating that residents were unable to escape in time because the building was partially locked down. However, city officials have denied these rumors.

The fire and the authorities’ denial that COVID restrictions hindered escape and rescue have sparked a surge of public disobedience unseen in mainland China since Xi Jinping gained power ten years ago.

In Shanghai, the most populous city in China, locals gathered on Urumqi-named Wulumuqi Road on Saturday night for a candlelight vigil that erupted into a protest early on Sunday morning.

According to witnesses and cameras, at another moment a big number began yelling “Down with the Chinese Communist Party, down with Xi Jinping” in a rare public protest against the Chinese government.

Occasionally, the police attempted to disperse the crowd.

Beijing sticks to a zero-COVID policy while the rest of the world attempts to coexist with the coronavirus. This has led to lockdowns and other restrictions in cities across China.

China’s case numbers have reached record highs for many days, with roughly 40,000 new illnesses reported to health authorities on Sunday for the previous day.

China defends Xi’s trademark zero-COVID policy as life-saving and essential to avert healthcare system overload. Officials have sworn to continue it despite growing public opposition and its mounting cost to the second-largest economy in the world.

Mark Williams of Capital Economics stated in a note published last week that the upcoming weeks could be the worst for China’s economy and healthcare system since the early weeks of the pandemic.

According to social media posts, locals of the city of Lanzhou in China’s far northwest toppled COVID staff tents and destroyed testing booths on Saturday. Protesters reported being placed under lockdown despite the fact that no one had tested positive.

Several universities, including those in Nanjing and Beijing, held candlelight vigils for the victims of Urumqi.

Since then, Chinese officials have attempted to be more specific in their COVID control measures, an effort that has been hampered by the increase in infections as the nation enters its first winter with the extremely contagious Omicron variety.

On Friday evening, demonstrators filled the streets of Urumqi, screaming “End the lockdown!”

Some citizens under lockdown in Beijing, about 2,700 kilometers (1,700 miles) away, held small rallies or addressed local officials over movement restrictions on Saturday, with some successfully persuading them to lift the restrictions ahead of schedule.

A video obtained with Reuters depicted Beijing people demonstrating in an unidentified section of the city on Saturday, chanting “End the lockdown!”

The administration of Beijing did not reply immediately to a request for comment.