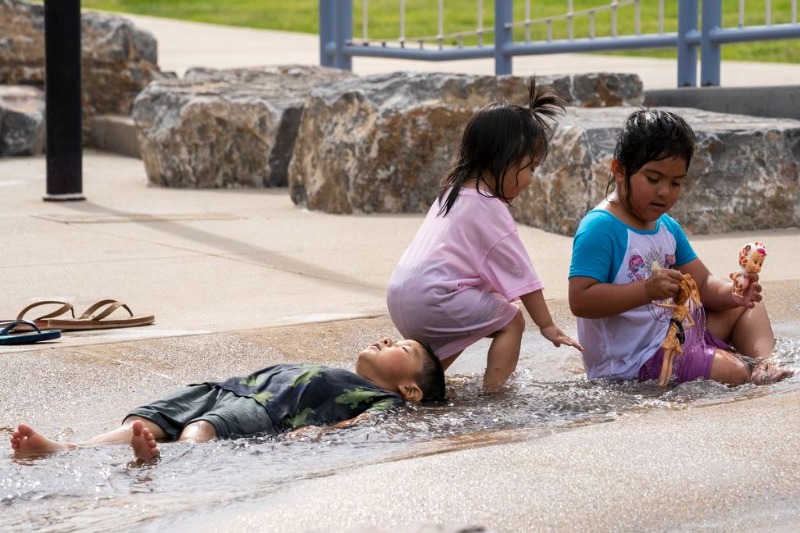 As climate change worsens, a record-breaking heat dome roasts an eighth of the US population

More than an eighth of the population of the United States, or over 40 million people, are on high alert across the western United States in anticipation of a prolonged heat wave that has the potential to cause death. Upwards of 300 temperature records could be broken this week.

In the days leading up to this record-breaking heat wave, the National Weather Service in Salt Lake City sent out a series of tweets that read, “No easy way to say this, so we’ll just cut straight to the chase: it’s going to be *very* hot for a *long time.”

On Tuesday, the city of Salt Lake City reported its third day in a row with temperatures in the triple digits, breaking records for both the daily high and the all-time high temperature. On Tuesday afternoon, the temperature in the city reached 107 degrees, tying its all-time record high temperature, which had previously been attained in the month of July.

In order to provide some context, the records in Salt Lake City date all the way back to 1874. Over the course of that time period, there have been over 50,000 calendar days during which temperatures have been recorded. The temperature in the city reached 107 degrees on Tuesday, making it only the third time in the city’s history that it has ever reached that high.

The reason for this is a large ridge of high pressure, often known as a heat dome, that is rapidly strengthening over the western United States. This week, temperatures will be anywhere from 10 to 25 degrees over their normal range as a result of factors like sinking air, clear skies, and prolonged exposure to sun radiation.

Because it deflects rain away from the area, this ridge is also to blame for the ongoing drought that has affected the region.

Hayhoe stated that the ridge would become stronger as the temperature increased. “Thus, although climate change may not be responsible for the ridge emerging in the first place, it might cause it to remain longer and be stronger than it otherwise would be, which in turn causes the drought to be more extreme and last for longer.”

This week, the state of Nevada will attempt to break its all-time record high temperature. The record is currently held by the town of Laughlin, which reached 125 degrees Fahrenheit on June 29, 1994. This week’s attempt comes amidst a historic drought and the lowest water level on record in nearby Lake Mead. From Wednesday until Sunday, high temperatures in Laughlin are expected to range between 120 and 122 degrees, whereas the norm for this time of year is 106 degrees.

Even as far north as Idaho and Montana, widespread records of temperatures in the triple digits have been seen.

Temperatures in Billings, Montana, surged to 105 degrees on Tuesday, tying for the hottest weather ever recorded in the month of June and shattering the previous daily record of 98 degrees, which had been in place for more than three decades.

The prolonged heat wave is expected to continue to get worse as the week goes on.

Heat waves have always existed, but their frequency and severity are only increasing.

Long before people began altering the climate, there have always been extreme weather events such as heat waves, droughts, and wildfires. According to Hayhoe’s explanation, what scientists are progressively beginning to say is how much worse these catastrophes are becoming as a result of climate change.

“Scientists are starting to be able to reply ‘a lot!’ and even answer this question with statistics for specific events,” she said. “This is a very exciting development.”

According to Hayhoe, heat waves and drought are projected to become more severe in the future. Especially in regions that are already susceptible to drought due to their natural conditions.

Ironically, climate change will also make it more likely that there will be prolonged periods of high rainfall. Hayhoe offers the following explanation: “Which is not good news either.”

“When rain falls in torrential downpours, it can be harmful, and it makes it difficult to replenish soil water and groundwater that has been depleted during a drought because most of it just goes off,” said a researcher.

The records of the past suggest that the future will be very different.

According to Hayhoe, “we can no longer rely on the past as a reliable predictor for future conditions,” which is something that humans have been doing for hundreds or even thousands of years.