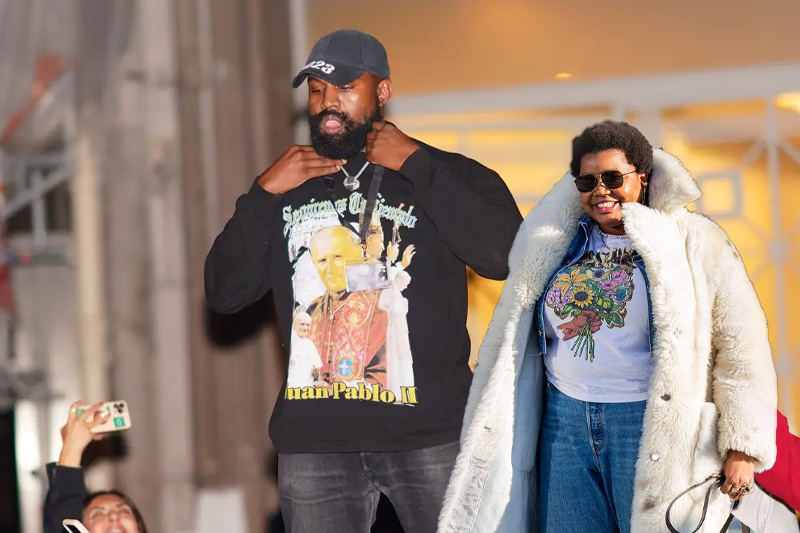 After attacking Gabriella Karefa-Johnson, the fashion editor of Vogue, for her criticism of Kanye West’s “White Lives Matter” T-shirts, West referred to Karefa-Johnson as his “sister.”

Ye wrote on Instagram on Tuesday night, with a photograph of Karefa-Johnson, “GABBY IS MY SISTER.” Karefa-Johnson was also tagged in the photo.

“IM NOT LETTING PEOPLE GO TO BED THINKING I DIDN’T MEET WITH GABRIELLE AT 5 PM TODAY FOR 2 HOURS THEN WE WENT TO DINNER AT FERDIE (a popular Italian restaurant in New York City).”

The founder of “Yeezy” went on to allege that their meeting was videotaped by Baz Luhrmann, who is best known for directing the film “Elvis,” at the request of Anna Wintour, who is the editor-in-chief of Vogue.

The rapper known as “Donda” also asserted that they posed for pictures after the incident, but that he had been “instructed to not post them.”

In his article, Ye made the assertion that he had the impression that Karefa-Johnson was being “used” by her firm “to comment on my expression.” Karefa-Johnson, however, denied that this was the case.

“WE APOLOGIZED TO EACH OTHER FOR THE WAY WE MADE EACH OTHER FEEL WE ACTUALLY GOT ALONG AND HAVE BOTH EXPERIENCED THE FIGHT FOR ACCEPTANCE IN A WORLD THAT’S NOT OUR OWN,” he wrote.

The rapper brought the letter to a close by declaring, “SHE DISAGREED I DISAGREED WE DISAGREE. AT THE VERY LEAST, WE SHARE A PASSION FOR FERDIE AND FASHION.”

In another Instagram post on Tuesday, Vogue condemned Ye’s conduct of their employee and verified that he and Karefa-Johnson had a meeting before Ye’s behavior was brought to light.

“Gabriella Karefa-Johnson, Vogue’s global fashion editor at large and a longtime contributor, has our full support. Vogue stands with her.” She was singled out and subjected to bullying on a personal level. “This cannot be tolerated in any way,” the publication declared in their response.

“Voices like hers are needed now more than they have ever been before, and in a private meeting with Ye today she once again shared her truth in a way that she believed was best, on her terms.”

The most current feud between Ye and West began when the editor of Vogue called West’s “White Lives Matter” designs “indefensible behavior” as she was sitting in the front row of his exhibition in Paris. Ye took offense to her comments.

She posted a video of her reaction to the fashion show along with a caption on her Instagram Story that said, “I’m angry… gathering my thoughts…” The caption was accompanied by the video.

“There is no art here,” she went on to say after that. “There is no excuse. I do believe that if you questioned Kanye, he would claim that there was art, revolution, and all of those other things included in that t-shirt. It’s not the case.”

Following her viewing of her Stories, Ye began to criticize the Vogue editor’s style decisions.

West posted a photo of Karefa-Johnson that has since been deleted, saying, “This is not a fashion person.” Karefa-Johnson was seen in the snap sporting brown boots, a striped knit skirt, a yellow graphic T-shirt, and a corduroy trench coat with eye-catching accessories.

Karefa-Johnson is not the only individual who has raised their voice in criticism of the most recent design decisions made by West.

After hearing of the recent shenanigans, the rapper’s longtime business partner Jason Lee severed all of their connections with the designer.