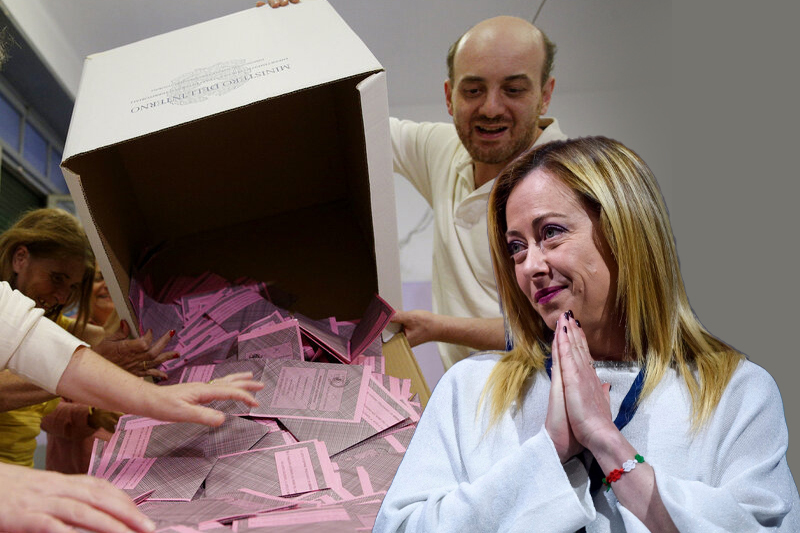 In a big turn of events for the far right coalition in Italy the voters have changed the stand and inclination, claiming victory for the far right coalition. Giorgia Meloni will thus be the first female Prime Minister of Italy after exit polls gave her rightwing coalition a clear majority in elections. With this Meloni, the Brothers of Italy leader will be on course to create the most rightwing government since the World War II.

The exit poll for Italian broadcaster Rai, gave the rightwing coalition lead of 41 per cent – 45 per cent against 25.5 per cent – 29.5 per cent for the leftwing bloc. The populist Five Star Movement was on mark of 13.5 per cent – 17.5 per cent.

In a victory speech, far-right Italian leader Giorgia Meloni took a moderate tone after exit polls projection after counting of votes from about two thirds of polling stations showed her party leading. “If we are called to govern this nation, we will do it for everyone, we will do it for all Italians and we will do it with the aim of uniting the people (of this country),” Meloni said at her party’s Rome headquarters. “Italy chose us,” she said. “We will not betray (the country) as we never have.”

In the last Italy election in 2018, the Brothers of Italy party had won just 4.5 per cent of the vote, but recent years have seen a considerable gain of popularity for the party, thereby “underscoring Italy’s longstanding rejection of mainstream politics, seen most recently with the country’s support of anti-establishment parties such as the Five Star Movement and Salvini’s League”, noted CNN. Celebrating the early results on Sunday evening, Salvini said on Twitter, “Center-right in clear advantage both in the House and in the Senate! It will be a long night, but already now I want to say THANK YOU.”

Mattia Diletti, a politics professor at Rome’s Sapienza University, said about Meloni, “Ambiguity is the key to understanding Meloni. She’s really interested in compromising with the EU on economic politics. But if the EU pushes her too much on the Italian government, she can always revert back to her safe zone as being a populist rightwing leader. She will do what she needs to do to stay in power.”