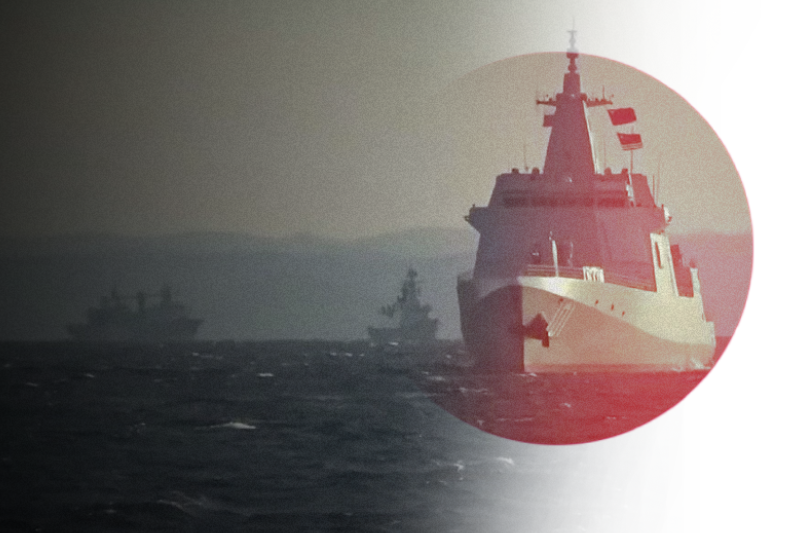 Why China and Russia are scrambling their warships near Japan’s territorial waters?

Around eight Russian and Chinese warships were reportedly spotted in the seas near Japanese territorial waters this week. This is being taken as yet another sign of the pressure China and Russia have been putting on Tokyo amid crumbling relations over Ukraine and Taiwan respectively.

On Tuesday, Japan’s Defense Ministry said its forces had spotted

“five Russian warships led by an anti-submarine destroyer steaming through the Tsushima Strait, which separates Japan and South Korea”.

The news release by ministry said, “The five-ship Russian flotilla has been near Japanese islands for a week, from Hokkaido in the north to Okinawa in the south.”

Furthermore, the ministry added that at least two Chinese warships and a supply ship were also spotted on Tuesday in the Izu Islands, located about 500 kilometers (310 miles) south of the capital city of Tokyo. One of those ships was said to bear resemblance to the Lhasa – a Type 55 guided-missile destroyer and one of most powerful surface ships owned by China.

“This is an obvious show of force from both Russia and China,” said James Brown, associate professor of political science at Temple University in Tokyo.

“These activities are a major worry for Japan. Not least, tracking the movements of both Russian and Chinese military forces are a strain on the resources of the Japan Self Defense Forces.”

A reply to Kishida’s recent summit?

Recently, Fumio Kishida – the Japanese Prime Minister – had hosted a summit of leaders from Australia, India and US in Tokyo. Coinciding with the summit, the Chinese and Russian air forces conducted joint air patrols over the Sea of Japan, the East China Sea and the western Pacific Ocean.

“Beijing has been angered by Japanese statements regarding the security of Taiwan, which the Chinese Communist Party considers a domestic matter,” Brown said.

With China does not rule out displaying aggression and coercion against Taiwan, Japan sees any conflict across the Taiwan Strait as a threat to its national security. Moscow too has been angered by Tokyo’s support to Kyiv, shown through imposition of sanctions on Russian diplomats by Japan. “Russia therefore wishes to use its military power to intimidate Japan in the hope that this will deter Tokyo from imposing further such measures,” Brown said.

In such a scenario, a coalition between China and Russia would be nothing short of a nightmare for Japan.