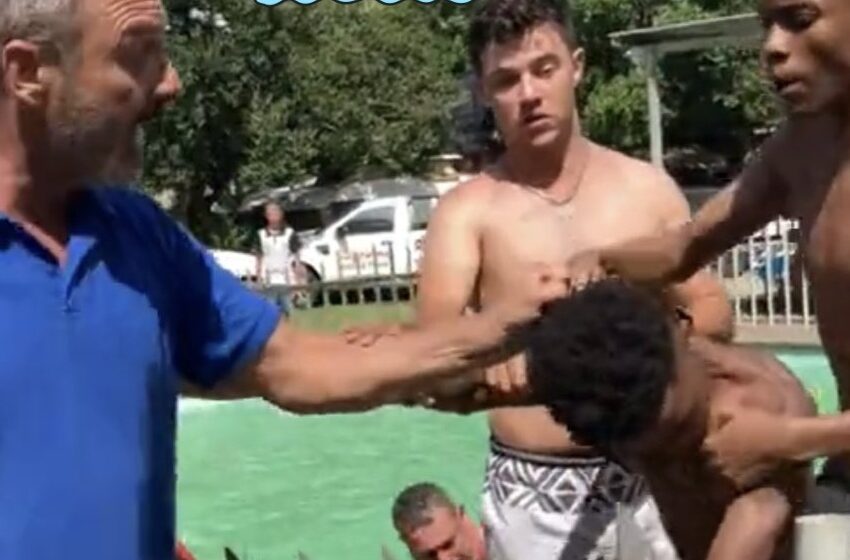 A Christmas Day attack by a group of white males on two Black teenagers at a resort pool in South Africa has provoked widespread indignation, resurrecting images of the harsh days of apartheid and acting as a painful reminder of the country’s unresolved racial tensions.

Social internet was flooded with cellphone footage of the attack, which the kids said began after they were informed the pool was for “white people only.” It depicted events that may have occurred decades ago, when apartheid-era rules prohibited the Black majority of South Africa from utilizing public amenities allocated for whites.

A video clip depicts one man delivering an open-handed slap to the face of one Black teenager, another graying white man holding a cigarette casually as he pulls the hair of the other Black youth, and one of the men grabbing the taller youth by the head and pulling him into the pool, attempting to submerge the youth’s head underwater.

Former underground anti-apartheid activist Brian Nakedi stated that his 18-year-old son, Kgokong Nakedi, was among the teens assaulted at the pool in Bloemfontein, a city some four hours south of Johannesburg. Both rejected reports made online claiming the kids initiated the brawl.

Mr. Nakedi, who watched his son’s assault, exclaimed, “I felt enraged. We must experience the suffering via our children.”

Police announced on Wednesday that they had arrested and charged three white men: Johan Nel, 33, and Jan Stephanus van der Westhuizen, 47, who appeared in court on assault charges; and a third suspect, 48, whose name was withheld and who is scheduled to appear in court on Thursday on a charge of attempted murder. No suspects or their attorneys could be reached immediately for comment.

Since the end of apartheid over three decades ago, South Africans have proudly referred to their nation as a “rainbow nation.” However, the incident at Maselspoort Resort and Conference Center adds to the long list of racist incidents that have prompted South Africans to engage in soul-searching and hand-wringing.

After a bouncer was accused of denying admittance to a Black customer without a white escort in Cape Town last month, demonstrators swarmed upon a pub. In May, the prestigious Stellenbosch University was the scene of an outrage after a video of a white student peeing on his black roommate’s things surfaced.

Bloemfontein is the capital of the province of Free State, which is a hotbed for racial conflict. Formerly an autonomous Boer Republic for the white Afrikaans-speaking immigrants who dominated South Africa’s apartheid state, the region is now predominantly agricultural. It is also at the center of South Africa’s intensely racist land issue.

White farmers from the working class commonly express anxiety about being killed or evicted from their land. In a democratic South Africa, black workers have complained about the harsh working conditions and unfulfilled promises of land ownership.

After footage of the violence at the pool appeared, President Cyril Ramaphosa issued a statement urging black and white South Africans to denounce bigotry.

Mr. Nakedi, 58, stated that his family had reserved a three-night stay at the resort for their first reunion since the coronavirus outbreak began. The site is separated into two halves, he explained, with cottages and chalets on one side, where his family was staying, and a woodland campground on the other, which is predominantly populated by white guests.

Management of the resort did not respond to a phone message requesting comment.

Kgokong Nakedi stated that he and his 13-year-old cousin, Sipho Khumalo, had gone swimming in the campground’s pool in the early afternoon on Christmas Day. Almost immediately after their arrival, he said, white people began inquiring what they were doing and declaring that they were not permitted. Kgokong reported that he entered the pool anyhow, but when emotions escalated, he and his cousin exited to inform his father.

Mr. Nakedi stated he confronted the men who detained his son and nephew. According to him, it appeared that they believed the youngsters were not resort guests and were thus not permitted to use the pool. Mr. Nakedi stated that he clarified that they were guests, and the matter looked to be resolved. Mr. Nakedi emphasized to the children that everything was OK and that they may return to the pool.

When they returned, however, one of the guys barred the gate and prevented them from entering, according to Kgokong. According to surveillance footage from the pool given by the Nakedi family, Kgokong and the guy engaged in a dispute, jabbing their fingers at each other. The resort’s administration had released the film. Both Kgokong and Sipho jumped the barrier. Video evidence revealed that as Kgokong leaped into the water, nearly all of the dozen white people and children in the pool left. Two youngsters of white race stayed in the water.

Then, as seen by surveillance film, some white guests and Kgokong began shouting at one another. Kgokong swam to the pool’s edge. Teenagers fought back when a white guy struck one of them with a slap, which caused commotion.

Kgokong subsequently revealed that the man attempting to submerge him repeatedly told him, “You’re battling for the water; now you’ll die.”

Kgokong, who was born after the end of apartheid in South Africa in 1994, stated that his generation, known as the born-frees, is “not at all tolerant of such racist behavior.” Still, he stated that his parents had instilled in him a sense of caution, knowing that as members of an ascending middle-class Black family, they would be stepping into regions that were formerly the exclusive domain of white South Africans who would not always welcome them with open arms.