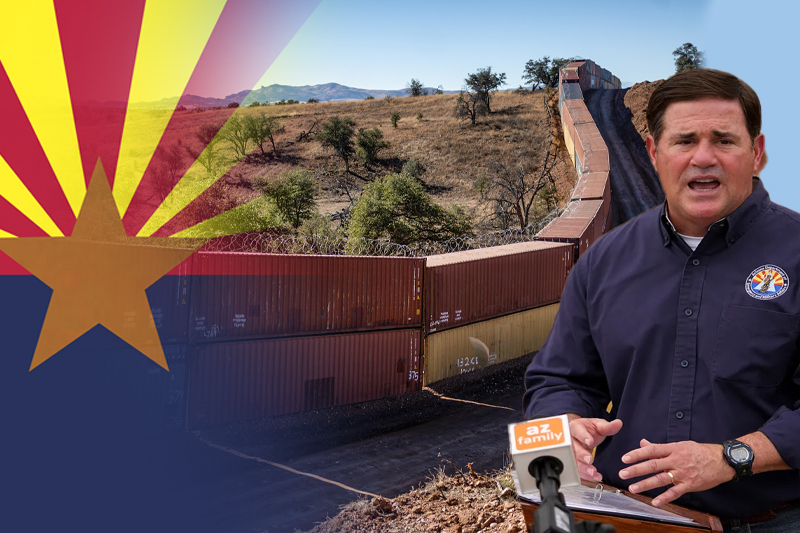 The U.S. government has sued Arizona Governor Doug Ducey and the state for placement of shipping containers and erecting its wall on the border with Mexico, calling it as an act of trespassing on federal lands. The complaint that was filed in U.S. District Court comes about three weeks before Republican governor Ducey would be replaced by Democratic Governor elect Katie Hobbs, who is openly opposing the construction.

Ducey had assured earlier this week that Arizona would help in removing the containers, that have been placed as a temporary barrier. But he in return wanted a verbal communication as to when the government would fill “any remaining gaps in the permanent border wall” as was announced a year ago. The U.S. “owes it to Arizonans and all Americans to release a timeline,” the Governor wrote in a Tuesday letter, regarding news of the pending federal complaint.

“Officials from Reclamation and the Forest Service have notified Arizona that it is trespassing on federal lands,” the federal complaint reads. The action also “seeks damages to compensate the US to fix any damage along the border”.

US DOJ has sued Arizona on behalf of the Bureau of Reclamation, the Department of Agriculture and the Forest Service it oversees. The US agriculture secretary, Tom Vilsack, said in a statement that the project “is not an effective barrier, it poses safety hazards to both the public and those working in the area and has significantly damaged public land”. He added, “We need serious solutions at our border, with input from local leaders and communities. Stacking shipping containers is not a productive solution.”

The legal conflict between Arizona and US government comes as the Biden administration is staring at a December deadline to terminate Title 42, a public health authority that was imposed during the onset of the coronavirus pandemic and permitted border officials to turn away migrants at the US southern border. A federal judge had blocked Biden administration’s attempts to maintain the authority last month and set an expiration date of policy for next week.