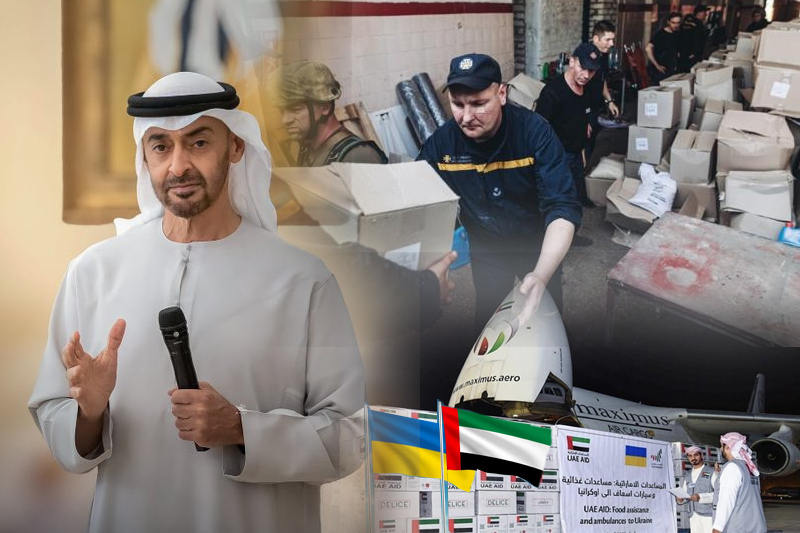 uae to send 100 million humanitarian aid to ukraine amid turmoil

In the midst of the ongoing confrontation with Russia, the United Arab Emirates made the announcement on Tuesday that it will provide Ukraine with humanitarian assistance to the tune of one hundred million dollars. This aid will assist in the reconstruction of the country. The decision was reportedly made in response to an instruction from President Sheikh Mohamed, as reported by the Wam news agency.

Up until this point, the United Arab Emirates has been one of Ukraine’s allies, and they have already provided financial assistance to Ukrainians who were seeking asylum in Bulgaria and Poland during the beginning of the conflict. The United Nations estimates that over eight million people abandoned their homes in Ukraine and made their way to various locations across Europe.

Sheikh Mohamed has also been very vocal about the need to assist Ukrainian civilians who have been impacted by the ongoing fighting. During a phone call with the President of Ukraine, Volodymyr Zelensky, Sheikh Mohamed made it clear that he will be providing “humanitarian and economic assistance to mitigate the impact of the conflict with Russia.”

On Monday, Zelensky also resorted to Twitter to express gratitude to the UAE for their unwavering support.

In addition to providing assistance to those in need, Sheikh Mohamed also met with Russian President Vladimir Putin to discuss ways to bring an end to the conflict between Russia and Ukraine “peacefully.” Following their meeting in Strelna, state-run media reported that Mohamed called on both Russia and Ukraine to establish a “middle ground.” The two world leaders were in Strelna.

According to a report by the state news agency of the United Arab Emirates (UAE), “a political settlement can be reached by engaging in communication, negotiation, and diplomatic channels,” which will lead to “world peace and security.”

On Tuesday, the European Union handed out the initial portion of the anticipated financial assistance to Ukraine. This was also the case.

During a post on Telegram, the Prime Minister of Ukraine, Denys Shmyhal, said that the European Union has provided the Ukrainian government with $1.96 million as a “financial resource to help pay critical budgetary obligations.”

The President of the United Arab Emirates, Sheikh Mohamed bin Zayed Al Nahyan, has given the order for Ukraine to receive a humanitarian aid package worth one hundred million dollars.

According to an announcement made by the state news agency WAM on Tuesday, the aid would support citizens who have been affected by the continuing situation.

According to Reem bint Ebrahim al-Hashimy, minister of state for international cooperation, the assistance comes from Sheikh Mohamed’s belief in the significance of solidarity in times of war and conflict, as well as the United Arab Emirates’ ongoing efforts to mitigate the humanitarian impact of the crisis in Ukraine.

It is the most recent shipment of aid relief that the UAE has given to the country that has been torn apart by violence.

In response to the urgent appeal made by the United Nations and the regional refugee response plan in Ukraine, the United Arab Emirates (UAE) has provided similar relief aid in recent months to Ukrainian civilians who have been affected by the crisis. In addition, the UAE has sent planes carrying aid to Ukrainian refugees who are currently residing in Poland and Moldova.

The announcement of the aid comes on the heels of a phone discussion that took place on Monday between Sheikh Mohamed and Ukrainian President Volodymyr Zelenskyy. During the call, the two leaders reviewed the most recent events in the conflict between Russia and Ukraine.

According to WAM, the two leaders talked about potential areas of cooperation and emphasized how important it is to find a way to reduce the level of friction that currently exists.

“Dialogue and diplomatic solutions” were emphasized as a means to end the offensive, with the leader of the UAE reiterating that the Emirates will “exert all possible efforts to prevent the worsening of the crisis and help foster an atmosphere conducive to de-escalation and negotiations for the benefit of all parties.”

According to reports, the leader of the UAE expressed his concern on the worldwide effects of the war between Russia and Ukraine, especially its effect on the international economy and security.

In especially within the United Nations, “I am grateful for the effective support of the sovereignty and territorial integrity of Ukraine,” the statement continued.