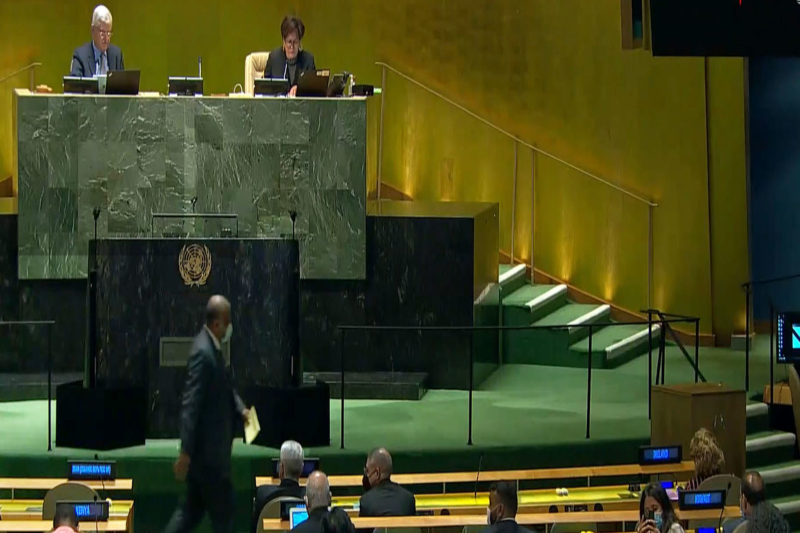 The UAE on Friday was elected unopposed as a non-permanent member of the UN Security Council for the 2022-2023 term, alongside Brazil, Ghana, Albania, and Gabon. It won resounding support from 179 out of the total 190 members of the UN General Assembly.

Taking to Twitter, Sheikh Abdullah bin Zayed, UAE Minister of Foreign Affairs and International Cooperation, recognised the UAE’s key responsibilities as a non-permanent member of the UNSC. He expressed keenness in fulfilling these responsibilities in addressing the most pressing challenges facing the world. He further affirmed that the UAE will continue to ensure relentless efforts to promote global peace and security with great diligence and determination.

In recent years, the UAE has emerged as a pioneering nation in the Middle East, working rigorously towards establishing peace and stability among countries in the region. The historic ‘Abraham Accord’ was signed between the UAE and Israel in August 2020 with the aim of normalising ties between the two countries and reinforcing efforts towards achieving regional peace. Other Gulf countries including Bahrain and Jordan joined the UAE in signing a peace accord with Israel to open promising opportunities across trade, business, and other sectors in the region. Along with Israel, Bahrain and Jordan, the UAE has furthered its ties with Egypt and Greece in recent years.

With its strategic allies in the Gulf region, the UAE has also gained significant influence in the Horn of Africa in recent years. In 2018, Abu Dhabi played a crucial role in the Ethiopia-Eritrea rapprochement, encouraging both sides to enhance their cooperation and fulfill regional commitments. The UAE worked with Saudi Arabia to provide diplomatic and financial support to Eritrea and Ethiopia in order to expand Horn stability. As Abu Dhabi expanded its foothold in the Horn of Africa, it gave increasing priority to the security interests of the region in its international diplomacy.

UAE as a mediator

Expanding its mediating role, the UAE recently offered its willingness to de-escalate tensions and establish peace between Israel and Palestine in view of the Gaza attacks. The UAE has backed a two-state solution to end the conflict between the two sides to further peace and prosperity in the region. Earlier this year, the UAE played a crucial role in reducing tensions between India and Pakistan over the Kashmir issue.

As part of its foreign policy, the UAE has given utmost importance to de-escalation and political diplomacy with countries across the world. Over the next few years, the UAE seeks to expand its foreign policy trajectory to promote friendly ties and regional growth.

The UAE’s international humanitarian role has grown steadily across various sectors with its generous contributions to global aid. In the wake of the COVID-19 pandemic, the country intensified its humanitarian efforts to support the healthcare needs of millions of people across more than 100 countries in need. From medical aid to food packets, the UAE, with its humanitarian arm, the Emirates Red Crescent, ensured the provision of tonnes of supplies to several parts of the world. The UAE has gained international recognition for its continuous support and dedicated efforts in extending humanitarian aid internationally.

Time and again, the UAE has expressed its readiness to work with the Security Council to better fulfill its responsibilities towards finding concrete solutions to resolve challenges faced by the Arab region, including increasing extremism and terrorism and COVID-19 repercussions. Furthermore, the UAE aims to use its position to augment humanitarian aid to all countries in need.

In its UNSC membership campaign “Stronger United”, the UAE outlined its four main pillars – securing peace, building resilience, advancing inclusion, and spurring innovation. The UAE has pledged to use its UNSC seat to promote innovation, global peace, inclusivity, resilience, women empowerment and limiting the impact of climate change. At the same time, the UAE will press the Security Council to take more action towards confronting extremism and combating terrorism against extremist ideology that has hampered growth and development projects in various regions.

The UAE is home to more than 200 nationalities from different countries living together as one. The UAE leadership has created a safe and secure environment for these nationalities to showcase their cultures and traditions with confidence.

As part of its UNSC membership, the UAE has pledged to represent the Arab region at the international platform by conveying and strengthening the voice of Gulf countries on various issues of global concern. The UAE received massive support from Arab nations during its campaign for its membership. In this regard, Abu Dhabi has vowed to amplify the zealous efforts taken by previous Arab members on the Council to raise the Arab voice at the international level.