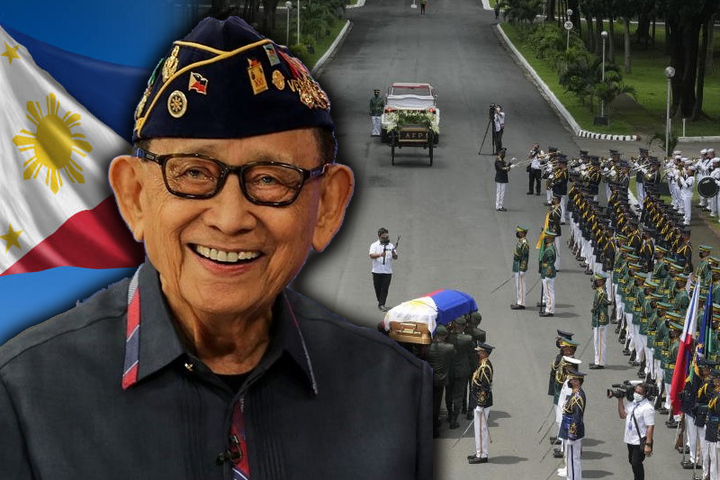 Former Philippine President Fidel V. Ramos, who passed away on July 31, was laid to rest on Tuesday, August 9, at the Libingan ng mga Bayani (LNMB) in Taguig City.

At the age of 94, the 12th President of the Republic of the United States passed away. Amelita “Ming” Ramos, Ramos’s wife and former first lady, along with their daughters and grandkids, were the ones who carried Ramos to his final resting place.

A formal burial with two parts was held for Ramos because he had previously served as both head of the nation and commander in chief. His wake had been held at Heritage Park for almost a week, and early in the morning, his remains were transported from that location.

After Ramos’ remains were transported into the foyer of Heritage Park, military honors were thereafter begun. A solemn procession then made its way to the LNMB after these events.

In front of the Heroes’ Memorial Gate at the Libingan, full military honors were bestowed upon the recently deceased commander in chief. Following the opening ceremonies, a funeral procession was led to where Ramos was laid to rest.

The burial was attended by President Ferdinand Marcos Jr., who was seen standing by Mrs. Ramos during the ceremony’s closing ceremonies.

As part of the emotional send-off for Ramos, his favorite songs, such as “Maalala Mo Kaya,” were performed for those in attendance. After the songs had been performed, Marcos, in his capacity as commander in chief, handed the flag of the Philippines over to Mrs. Ramos.

Flowers were presented to the recently deceased president by his loved ones as well as other attendees at his funeral.

The last floral wreath was laid on top of their grandfather’s grave by all of the grandkids of Ramos.

A former military commander, Ramos held the position of chief of the Philippine Constabulary and later that of vice chief of staff of the Armed Forces of the Philippines (AFP) before entering politics. He was one of the military officers under the late dictator Ferdinand Marcos who was responsible for the implementation of Martial Law, which at the time targeted government dissidents.