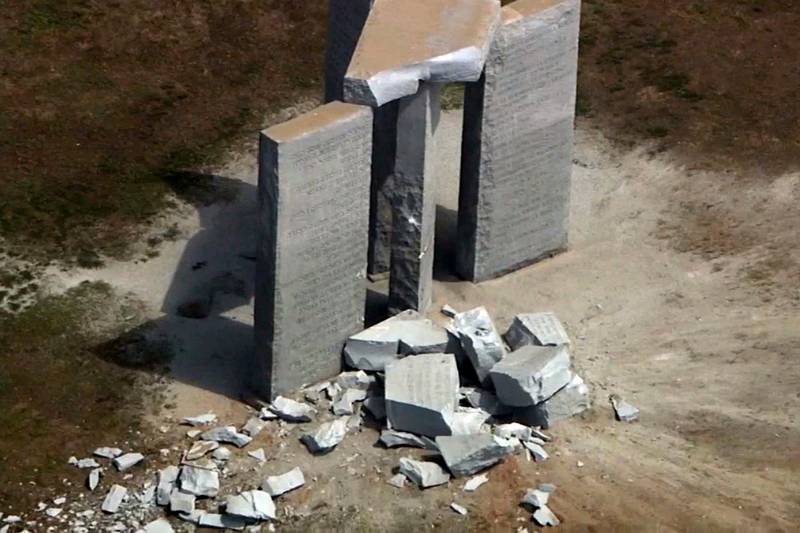 Some consider 'America's Stonehenge' to be satanic

Some consider ‘America’s Stonehenge’ to be satanic

Many people have dubbed it “America’s Stonehenge,” but a conservative congressman labeled the monument “satanic” and ordered its destruction hours after vandals severely damaged the granite structure.

According to local media, the Elberton Granite Association, which had cared for and conserved the stones, replacing them would have cost hundreds of thousands of dollars.

One of the 42-year-old Georgia Guidestones was reduced to rubble in a predawn explosion on Wednesday morning. Investigators from numerous law enforcement agencies arrived at the site about 100 miles east of Atlanta searching for answers.

The rest of the monument was dismantled later that day “for safety reasons,” according to the report, which included a photo showing the monument in its entirety reduced to ruins. When the initial damage was done, it was attributed to “unknown individuals” detonating an explosive device on the premises.

Gray monoliths were placed in a vast field outside Elberton, Georgia, in 1980 and classified it as a tourist attraction by the state’s travel site and the Elbert county chamber of commerce.

The 6-meter-high (19ft) monument was initially made of a single upright slab at the center of four bigger tablets set around it, with a massive rectangular capstone placed above them.

The monument has been dubbed “America’s Stonehenge” by official descriptions. Stonehenge, the UK’s prehistoric landmark dating as far back as 3000 BC in Wiltshire, was vastly older and more impressive.

Unknown to the general public, the slabs’ vague wording, written in 12 different languages, calls for a population cap of 500 million to ensure that humanity can continue to exist “in perpetual balance with nature.”

It is believed that the Guidestones served as an astronomical calendar, with a small hole in the construction allowing sunlight to stream through at noon each day, illuminating inscribed dates. Controversy arose from those who linked the monument’s message to far-right conspiracy theories and religious blasphemy.

Kandiss Taylor, the third-place finisher in the Republican primary on May 24, made removing the monument part of her campaign platform, which was parodied by TV comedian John Oliver. Taylor ran for governor of Georgia in 2012 and lost.

“God is God all by Himself. He can do ANYTHING He wants to do. That includes striking down Satanic Guidestones.” Taylor tweeted that the bombing of the Guidestones was an act of divine intervention following the news of the attack.

“Anyone who goes on private or public property to destroy anything illegally should be arrested,” Taylor made a video stating her opposition to vandalism and that she would never condone it. According to investigators, no evidence has been found linking Kandiss to the blast.