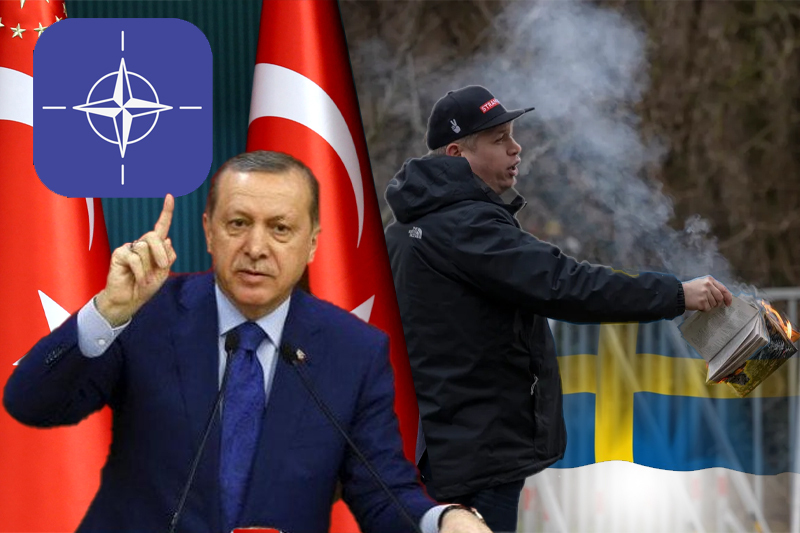 Sweden should not expect Turkey to support its NATO membership bid, Turkey’s President Recep Tayyip Erdogan warned on Monday, following weekend protests in Stockholm by an anti-Islam activist and pro-Kurdish groups. He slammed Rasmus Paludan’s Quran-burning protest on Saturday, calling the action an insult to everyone, especially Muslims.

Erdogan also criticised Sweden for pro-Kurdish protests where demonstrators waved flags of various Kurdish groups, including the Kurdistan Workers’ Party, or PKK, which is identified as a terrorist group by Turkey, the EU, and the US. PKK has waged a decades-long insurgency against Turkey, but its symbols are not prohibited in Sweden.

Erdogan has also expressed his disappointment at Sweden for allowing the protests to take place outside the Turkish Embassy in Stockholm. Saturday’s demonstration – but not the burning of the holy book itself – was given prior approval by Swedish authorities.

The burning of the book has incited anger among people across the globe and has received sharp criticism from scores of global political leaders.

Sweden and neighbouring Finland applied to join the military alliance after Russia invaded Ukraine last year, but requires Turkey to back its membership bid. As Turkey is already a NATO member, it can block another country from joining, as it’s necessary for all 30 members to agree before a new member can be admitted.

Ankara has made several demands of Sweden already, including the extradition of people that Turkey regards as ‘terrorists’. It is demanding Stockholm override a decision by its own Supreme Court. Last December, the Swedish Supreme Court blocked the extradition of exiled Turkish journalist Bulent Kenes, on the grounds that he was prone to persecution for his politics if he were sent to Turkey. Kenes has been accused by Turkey of being part of a 2016 attempt to topple Erdogan in a coup.