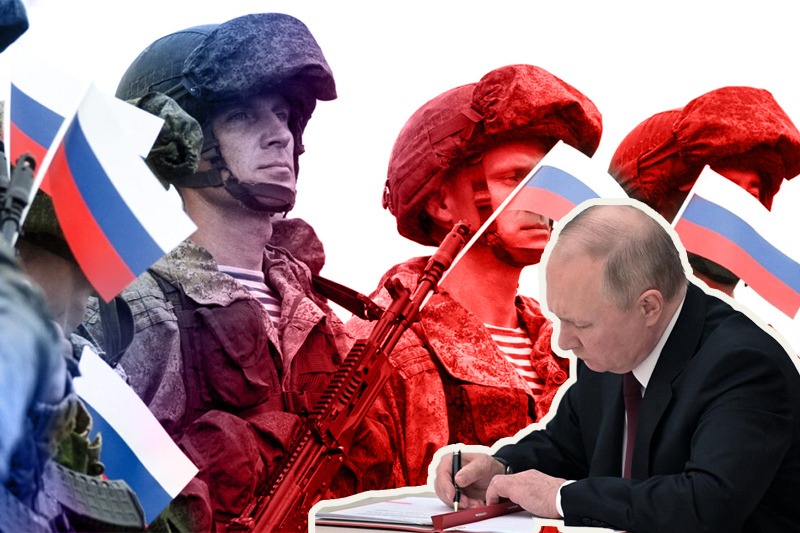 Russian President Vladimir Putin has declared martial law in the four regions of Ukraine that were annexed by Moscow, giving all the regional governors in Russia emergency powers that made way for sweeping new restrictions across the country. The regions of Ukraine are Kherson, Zaporizhzhia, Donetsk and Luhansk. Moscow does not control these regions entirely and is right now attempting a hasty retreat in Kherson as Ukrainian forces are gaining offensive in the region.

Putin didn’t immediately give details about the steps that would entail under martial law, but he did say that the order will be effective starting Thursday. His decree gives the law enforcement agencies time of three days to submit specific proposals and also orders the establishment of territorial defense forces in the regions annexed in Ukraine.

“We are working to solve very difficult large-scale tasks to ensure Russia’s security and safe future, to protect our people,” Putin said in televised remarks at the start of a Security Council meeting. “Those who are on the frontlines or undergoing training at firing ranges and training centers should feel our support and know that they have our big, great country and unified people behind their back.”

According to the Russian legislation, martial law can include ban on public gatherings, introduction of travel bans and curfews, and also conducting censorship, as well as other restrictions. Kremlin spokesman Dmitry Peskov has clarified that Putin’s order doesn’t anticipate the closure of Russia’s borders, as reported by the state news agency RIA-Novosti. The Russian leader has also ordered the establishment of a Coordination Committee to increase interactions between government agencies in dealing with the fighting in Ukraine, which Putin continued to call a “special military operation”, according to The Associated Press.

In the annexed region of Crimea and Crimea and in Krasnodar Territory, Belgorod, Bryansk, Voronezh, Kursk, Rostov regions, authorities will introduce a “medium alert level that will restrict movement and transportation and makes provision for the temporary resettlement of residents to safe areas, without providing further specifics about the populations that might need to move”.