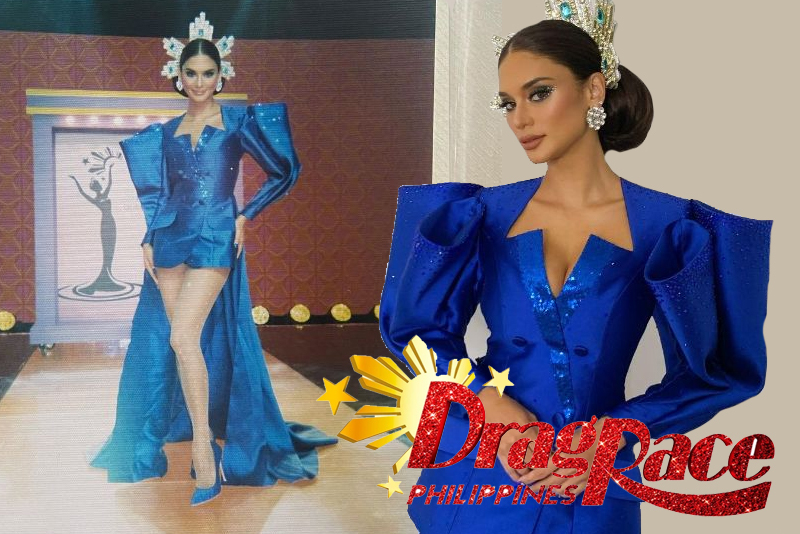 Are you completely caught up with the outfits, lipsyncs, and drama that have been going down on Drag Race Phillipines? Racers!

This week’s episode of “Miss Shutacakween,” the show’s unique own spin on our standard beauty pageants, featured the top 8 contestants showing off what they’ve got on “Miss Shutacakween.” It’s possible that the reigning queen of all queens, Miss Universe 2015 Pia Wurtzbach, would have been the most qualified guest judge for this competition if she had been invited to participate.

Pia graced the catwalk wearing a show-stopping blue suit that was designed by a local designer named Jot Losa. Pia is a die-hard fan of the program herself. The ensemble was consisted of a tiny dress that was tailored to look like a suit and featured a square-cut neckline at her bust. It had a beautiful train and wide pleated sleeves that melded into one piece. Queen P’s entire outfit, from the collar down to the sleeves and even down to her fishnet stockings, was covered in sequins and rhinestones, making her look absolutely stunning.

Now, it can’t be denied that the costume is somewhat reminiscent of the beauty queen’s classic winning gown at Miss Universe 2015, and to tell you the truth, that was the primary source of inspiration! Jot revealed in one of her Instagram Stories that the intention behind this outfit was to create a reinvented version of Pia’s gorgeous Albert Andrada dress, and we are absolutely smitten with how it turned out!

Then, Pia’s stylist for this event, Adrianne Concepcion, matched the dress with similar heels, enormous pearl earrings, and a headpiece that was inspired by Pia’s crown. It had been crafted by the late, great Dennis Celestial, and it emitted a strong glow from the blue and transparent jewels that adorned it.

Mickey See gave her cheeks a flush of color with blush, applied a neutral-toned lipstick, and skillfully positioned rhinestones along the crease of her eyeshadow to create a wing. This was all part of her makeup routine. After that, Renz Pangilinan pulled her hair back into a sleek bun (exactly like the look she wore when she won the pageant! ), and she positioned the magnificent headpiece directly behind her head.

It should go without saying that we are completely over over heels for this outfit, Queen P!