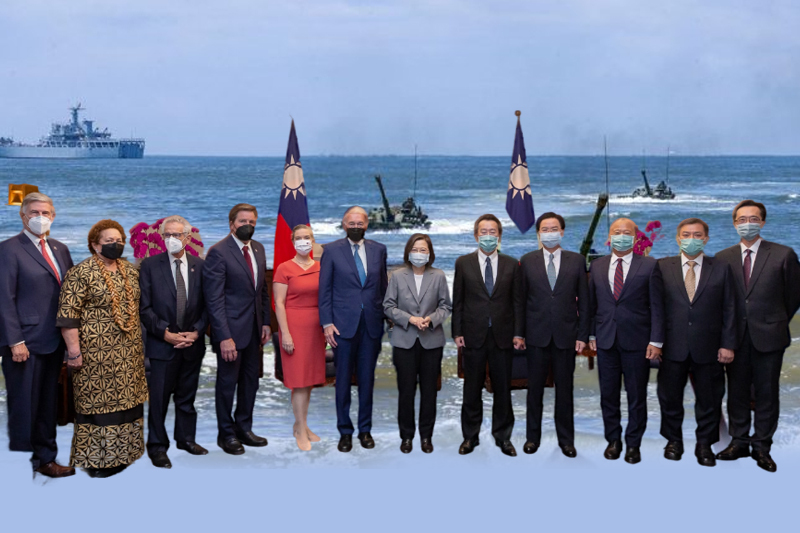 New drills by infuriated China as US delegation visits Taiwan

China has announced more military drills around the self governing island nation of Taiwan after its president met with a new US congressional delegation on Monday. This has further threatened the already simmering tensions between Beijing and Washington after US House Speaker Nancy Pelosi’s visit to Taiwan as part of her high profile Asia trip had not sit well with China, triggering live fire military drills around the island nation. The US congressional delegation had arrived in Taiwan just two weeks after Pelosi’s trip, who was the highest ranking US official to have visited the island country in 25 years.

Additional military drills in the seas and skies around Taiwan were announced on Monday by China’s People’s Liberation Army (PLA), the Defense Ministry and its Eastern Theater Command announced in a statement. “The exercises are intended as a resolute response and solemn deterrent against collusion and provocation between the U.S. and Taiwan,” the ministry said.

In Taipei, the chair of the legislature’s Foreign and National Defense Committee, Lo, Chih-Cheng, met with the US congressional delegation led by Senator Ed Markey, D – Mass, and stated that, “Their visit at this time is of great significance, because the Chinese military exercise is (intended) to deter U.S. congressmen from visiting Taiwan.”  Lo added, “Their visit this time proves that China cannot stop politicians from any country to visit Taiwan, and it also conveys an important message that the American people stand with the Taiwanese people.”

The latest delegation visit from US, just like Pelosi’s visit, was a ‘surprise’ trip with no notice ahead of time, irking Beijing even more. “China will take resolute and strong measures to defend national sovereignty and territorial integrity,” Chinese Foreign Ministry spokesperson Wang Wenbin said on Monday at a daily briefing, after Beijing announced new drills around Taiwan. “A handful of U.S. politicians, in collusion with the separatist forces of Taiwan independence, are trying to challenge the one-China principle, which is out of their depth and doomed to failure.”