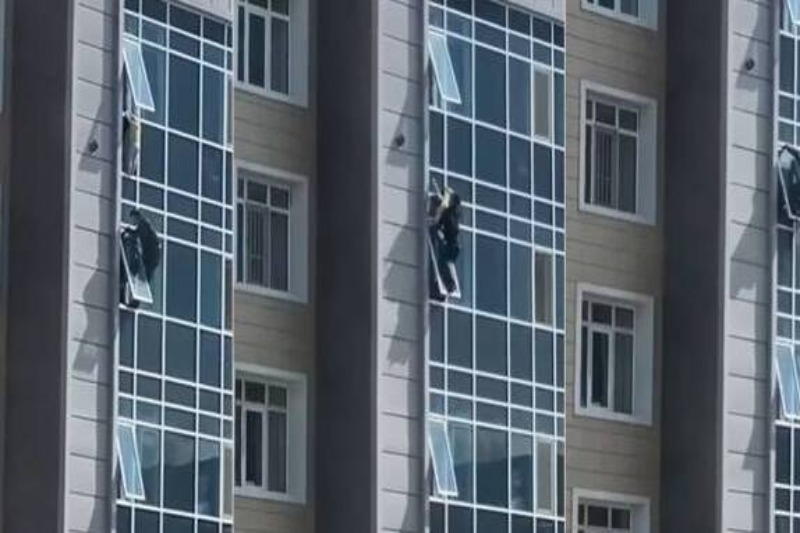 On July 19, a man in the city of Tongxiang in Zhejiang Province in China, identified as Shen Dong, a bank staff member who is 31 years old, rescued a young child who was falling from a height.

Shen can be seen in a video that was posted to Twitter by Zhao Lijian, the deputy director of the Information Department for the Chinese Ministry of Foreign Affairs. The video was accompanied by the caption “Heroes among us,” and it shows Shen running towards the building with a woman while talking on the phone.

In spite of the fact that he lost his footing momentarily while walking on the ground, he successfully saved the child who was seen falling from the sixth level of the building by tossing away his cell phone.

The thirteen-second footage that Zhao uploaded on July 22 received over 11,800 likes, and many of the comments praised Shen for his bravery and referred to him and the woman who remained anonymous as “angels.”

After witnessing what could be considered a distressing film, some people tried to look on the bright side of things by making jokes, such as the user on Twitter who said, “Get that dude a deal with the National Football League.”

After climbing atop a stool, the little child reportedly took a fall from the sixth floor of the apartment building, which was reported in the regional media. She fell off a steel terrace located on the first floor before Shen was able to catch her. She landed on the steel terrace.

Shen was quoted by the local media as saying, “I believe that anyone might have come forward to catch the girl. I just happened to be in the right place at the right moment.”

“The name of the young lady is Xinxin. It’s just a coincidence, but my daughter’s name is likewise Xinxin. Even the characters haven’t changed.”

The child, who was fortunate enough to survive the terrifying fall, sustained damage to her legs and lungs but was generally in good health. Shen was able to avoid injury during the rescue operation, which he attributes to the fact that he “exercises routinely.”

The young child was taken to the Tongxiang Second People’s Hospital to be treated for her injuries, and she was released from the facility the very same day.
He explained to the Qianjiang Evening News that he reached out to her because “it was just instinct. It’s a good thing I was able to get there on time.”